Leicester fans with plenty to say after losing at Newcastle United – Not happy!

Down below, you can read what the Leicester fans have been saying after Sunday’s match.

The visitors taking the lead on 19 minutes.

However, a comeback 2-1 win for Eddie Howe and his Newcastle United players, with Bruno Guimaraes the star of the show.

A bit embarrassing for the Leicester fans that they couldn’t even sell the full away end.

Whilst many of them in the comments, apparently embarrassed because their team failed to win, never mind draw, with their belief that this Newcastle team is so poor.

A lot of moaning about their own team and players as well, despite these last 12 months where Leicester fans have seen their club win its first ever FA Cup and now reach their first ever European semi-final.

Leicester fans commenting via their Foxes Talk message board:

‘Newcastle celebrating like they won a cup final they are a rank team to watch but we were just as bad today.’

Before Howe came in Newcastle United had gone 11 games without a win.’

‘You should always celebrate when you manage to beat one of the big teams and hit above your weight. – Hence their celebrations!!’

‘Excesses of whacky backy and newcy brown over 4 days?

Also interested in what you did for a night 20 minutes outside of Newcastle? Thats either Scotland or Sunderland aint it?’

‘Stayed in Tynemouth on the coast with family. Had it booked months (a covid cancellation booking) before we got drawn to Eindhoven. So had to hatch a plan which did both!’

‘We were in North Shields. Lovely place,disappointing result and a 6 hour drive back today after a great morning on Tynemouth beach.’

‘They’re so deluded up there they could have been bought by the devil and you’d be seeing horns on heads in the away end the week after.

All of it under the guise of “wanting to see the team try”. Absolute rubbish when you see how Chelsea fans have reacted to potential ownership by accused racists. Newcastle fans let a regime waltz on in because they want to see the return of what? Because the fans supposedly ‘deserve’ better?

‘Because our owners are squeaky clean arent they?

Also if we had Mike Ashley as our owner and their now owners wanted to buy us then most fans would be begging for Saudi money lets be honest.’

‘Nah you’re alright. Some cozy relationships with figures in power to get a monopoly is not really the same as being used to ‘sports wash’ to detract from your terrible human rights record.

You’re obviously right that many would go for it though, as you’ve seen with the Newcastle fans lapping it up.’

‘The REAL reason for the shrieking about Saudis from national journalists was it wasn’t one of THEIR teams.’

‘I don’t think there are any footballs fans with super rich owners who can claim that moral high ground. We are all lapping it up while our teams do well.’

‘I wouldn’t be losing sleep over yesterdays result. We won 5 games on the trot at the House Of Ashley so that was bound to end at some point.’

‘The great thing about being so high is you get a really great sense of the positions.

Maddison came on for Perez and started on the RW for a few minutes, then moved central allowing JJ to move into that space. Madders then seemed to get deeper and deeper before he was playing what looked like some sort of Mendy almost CB position. Bizarre!’

‘Makes losing to this lucky bunch of all the more painful.

Rodgers fielded a substitute team intentionally and they still outplayed Newcastle. Their first goal was flukey and the second oh so very fortuitous.’

‘Has any side ever looked less threatening with 69% of the ball? Even us?’

‘The fanfare and adulation Sky were giving out post game was nauseating, they’re loving their new oil money club they can make money off speculating on transfers and writing nonsense news articles about. Considering I missed Newc’s previous boisterous stage in the 90s I’ve always seen their fans as solid & dedicated … the hatred of Bruce & Ashley was abit weird, they weren’t pushed to their full potential but they had good players, spent money and spent only 2 of their seasons out of the Prem … media definitely drove some hatred up there in ’em.’

‘It does stick in the throat the way sky swoon around the big clubs particularly when they have an influx of dirty money.’

‘I have seen some bits or phases of the game but man that Maxime guy is a pain with his running, dribbles and passes. And it’s bizarre and crazy that Newcastle can score overtime I wasn’t expecting this.’

‘Understand they were pleased to win a match with a late goal but betrays a somewhat small club mentality to celebrate as if they won a cup or some honour.’

‘If I was the manager…I would be telling/asking..what the hell have they got to celebrate like this..!! Their own bad play got them there in the first place..Concentrate and celebrate at the end of the season…’

‘Smash and grab by them, wont say it was luck as they created and took their chances and we didnt despite how much of the ball we had.’

‘I watched the whole game without sound in a boozer.

We totally dominated most of the game, especially the second half.

Obviously l can’t speak for the majority that watched with commentary, but did they make Newcastle out to be far better than they were ?

To me, they were truly awful.’

‘That was one of my worst football experiences ever.’

‘Just how old are you son?’

‘Perez amazes me he looks like hes having a day out at disney world rather than involved in a footy match happy smiling not concentrating weird.’ 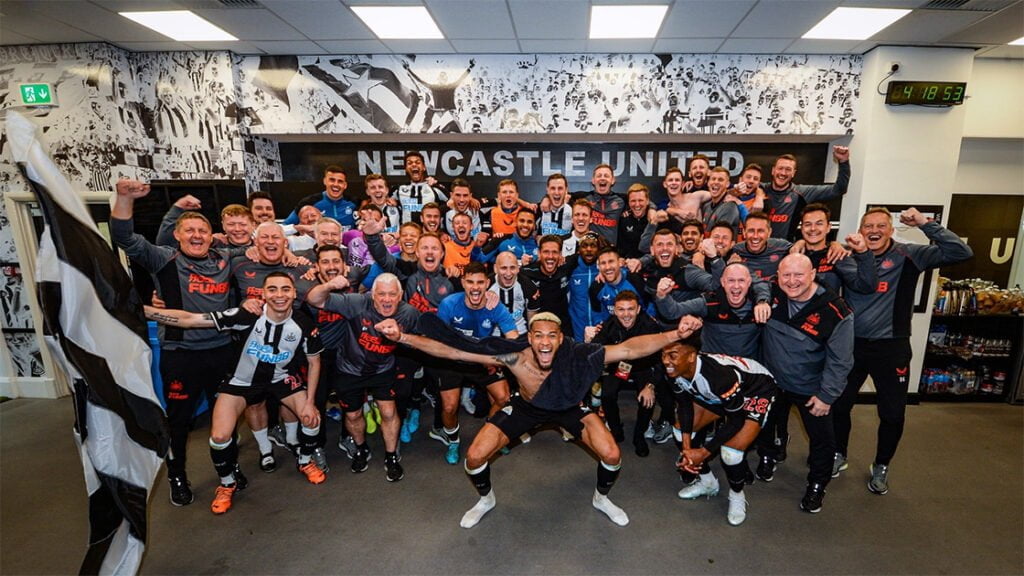 ‘Imagine posting that (Newcastle squad and coaching staff celebrating) after beating Leicester B.’

‘Newcastle have posted this picture on Twitter. What cup did they just win?’

‘Newcastle do that photo after every win. Relax. If our lot were as bothered about the result as that we might have actually come away with something.’

‘Still so much of the very basic nature of football that Brendan has to learn.’

‘Rodgers probably deserves another season for all that he did last year and the Europa run but this level of performance has been too common for us this year.’

‘Newcastle are shocking. Why didn’t we go for the win? We never looked like winning.’

‘Newcastle celebrating like they won a cup final, they are a rank team to watch but we were just as bad today. Few players looked tired today and that can be expected kdh and youri need a rest go with nacho and daka next game can’t be any worse.’

‘Why do people always take the mick out of fans celebrating?.

Maybe that’s one of the reasons the atmosphere is so awful these days.

Anyway, I’m never comfortable in injury time with this team, always expect to concede never expect us to score a winner.

‘Says everything about our season that that Newcastle team is 3 points behind us, having not won a game until after Xmas.’

‘Actually disgusting that Newcastle made zero attempt to win today and yet win because our players have literally given away 2 pathetic goals and our attackers have zero creativity.

Absolutely raging we’ve lost to this shower even if we have little to play for in the league .’