The League One promotion battle finale ends this week.

The regular season anyway, if not the play-offs that will follow.

Starting this Tuesday night (tonight), there are a trio of key League One promotion matches, before then the final round of games on Saturday for all 24 clubs.

Focusing tonight, as a Newcastle United fan it is a very pleasurable night of football to look forward to.

As well as the battle for Championship and League One promotion, I will also be taking a keen interest in the Champions League semi-final, hoping Real Madrid can do the business against Man City.

As a Newcastle United fan who has experienced such a stressful season until very recently, I am now looking at this as my reward of putting my feet up and enjoying the success and misfortune of others, ahead of Eddie Howe and the boys having a real go at Liverpool on Saturday.

Anyway, going back to the League One promotion battle, I knew the mackems were playing tonight, but until having a proper look, I didn’t realise just how close it is at the top and how many different permutations there still are.

This is how the League One table looks before Tuesday night’s matches: 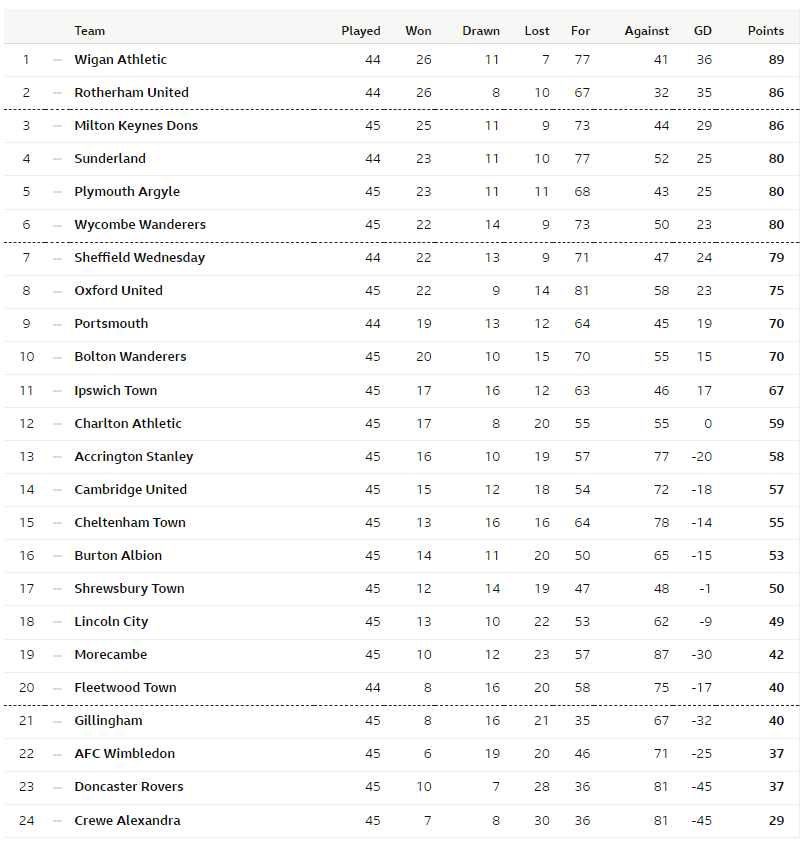 As things currently stand, no club is automatically promoted so far, whilst seven clubs are still capable of getting promoted, via automatic promotion and / or the play-offs.

Wigan are effectively up and if avoiding defeat tonight they will be automatically promoted.

However, it is astonishing the permutations for the rest of them, nowhere more so than for Sunderland.

Yes, a win for our mackem friends tonight over Rotherham, would see Sunderland still with a small outside chance of automatic promotion. However, if Sheff Wed win tonight and Sunderland lose by three goals, the mackems would drop to seventh and outside the play-offs.

It really is that tight, if you look at fourth to sixth in the able above, they are all on 80 points and only two goals covers the three of them in terms of goal difference.

As for Saturday, the matches (all 12.30pm kick-offs) deciding the League One promotion battle are:

By far the most likely scenario is that Sunderland will end up in the play-offs, however, I will be watching with interest regardless as I flick around the TV channels keeping an eye on them and the League One promotion affecting matches, as well as the Championship top end games and that small matter of a Champions League semi-final.