If you’re anything like me, you’ve spent the last few weeks wincing randomly as the memory of Alex Iwobi walking through the Newcastle defence to ensure the worst team in the league beat us with ten men, a thought exacerbated by the sight of hapless Everton falling to yet another defeat at Burnley.

This match will have had the worrying effect of galvanising Sean Dyche’s serial relegation escapists and I’m sure I wasn’t the only Newcastle fan anxiously counting back over to the relegation zone we’d thought we were finished with.

There’s the ominous spectre of a run of three games against Liverpool, Man City and Arsenal to stress about, so for paranoid Percivals like myself, this run of three winnable home games took on a heightened responsibility to deliver at least some of the six points that would probably remove all doubt.

The fact that the team seem to have reverted to some kind of San Marino impression in the defeat at Tottenham did not encourage against a very good Wolves side. As a wise man might say, we needed to dust ourselves down after Tottenham and see a reaction.

Eddie Howe has shown evidence of a ruthless streak with some of his comments post-Spurs and that was evidenced to an extent as Krafth and Bruno came into the team, however, the majority of those guesting for San Marino were given a chance to redeem themselves.

The opening exchanges were encouraging as United had the majority of the ball and looked to have a bit of intent about them, while Wolves set the tone for a welcome underwhelming performance by not really doing anything. In fact, I’m going to have to summarise the first half in the one incident of note, as there were literally zero legitimate shots on target from either side.

United’s problem, to be addressed in the summer, is that there is a shortage of killer balls and viable efforts on target, meaning a lot of promising attacks end in disappointment. However, tonight’s side included a glimpse of NUFC future in Bruno, and his getting hold of the ball prompted our incident of note. Krafth took the ball off Wolves and set Bruno away to play a defence splitting one-two via a cheeky Almiron backheel before knocking it across for Wood to finish after the ball pinged off a series of defenders who seemed more concerned with thumping him than clearing it. This was one of those horrible VAR decisions, where the teams get ready for the kick off and you have a full celebration before some miserable fun vacuum sat with a monitor decides to wreck it for everyone. Bruno was marginally off when he played the ball in but you’d have got away with it another day.

Set-pieces have been a bit of a salvation in these tight games and there was a sense of anticipation in first half added time as Schar and Shelvey lined up a promising free kick, only to both have a shot at belting it into people’s shin pads.

The concern at this point was that Wolverhampton gave their heids a wobble and turned it up second half. Thankfully, the visitors transpired to be doing the thoroughly decent thing of turning in their shoddy performance against Newcastle, instead of the usual type who look superhuman at St James then show up to be bang ordinary against everyone else.

For me there were two key, small moments that swung this game. Firstly, with Wolves having a period of pressure Moutinho went on a mazy run past defenders that drew horrific memories of the Iwobi moment, only for Krafth to slide in and rob the ball off his toes magnificently. In his absence against Spurs I think I noticed how much unspectacular donkey work the Swede does at right back and his presence offered a bit of steel that deserves credit.

Secondly, there was the ongoing issue of Allan Saint-Maximin. With a debate in the ether as to whether he’s a key player or an expensive luxury, ASM had a bit of a patchy evening with several promising runs fizzling out as he attempted to beat one man too many. When Bruno once again took off on a foray forward, his tremendous centre found ASM a few yards out, only to belt the ball way over the bar. Groans, followed moments later by a swell of support as the crowd started singing Saint-Max’s name, just maybe making him feel appreciated enough to keep digging in.

Moments later, the exact same ASM robbed the ball off Wolves and gave a smart little flick to Joelinton. Big Joe steamed forward before playing in Wood, who was taken down by the keeper before he could reach it. Penalty, and this time the smashing fella sat with a monitor, let the forces of good win out. Wood pelted the pen down the middle and this time he did have his first goal at St James’.

Bruno had a chance to put the game to bed when he broke in a 3 v 2 with Wood and ASM. The latter’s pass was just a bit behind the Brazilian, forcing him to dig a shot out that rolled agonisingly wide. The goal would have been no less than Bruno deserved after an outstanding display that showcased what a class act he is, running the midfield with skill and class we haven’t seen in a long long time. You get goosebumps thinking of him in a team entirely of talents like him, but he’ll always be remembered as the one who came when we were second bottom. Another instant club legend.

Wolves of course looked to spoil it and Fabio Silva in particular came to life, first glancing terribly wide from a free header that shouldn’t have been allowed, then firing a vicious effort towards the bottom corner only for Dubravka pulling out a superb diving save. Game management returned and three very big points were sealed. 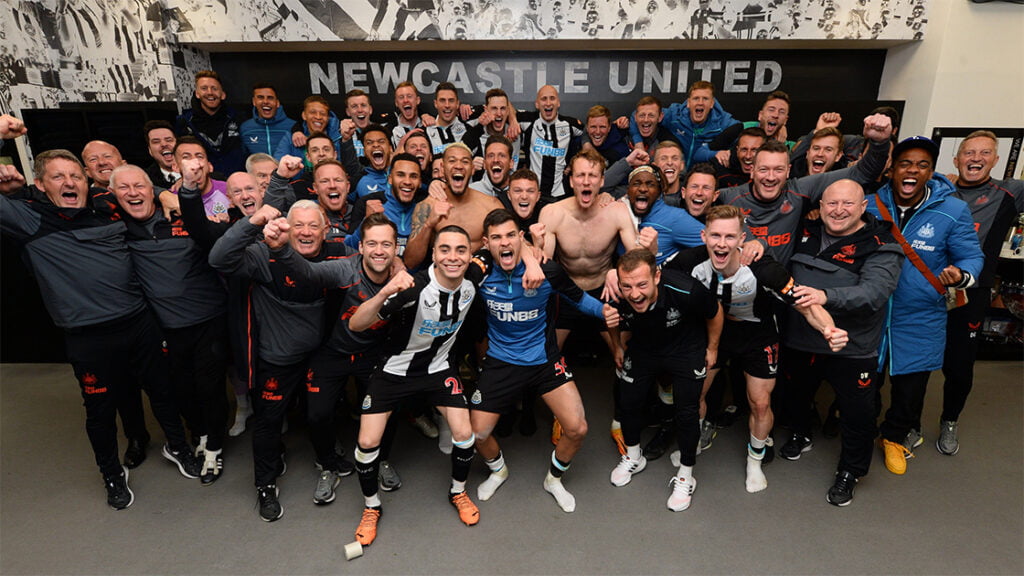 A shame that Man Utd have followed our lead in letting themselves down at Goodison, so at time of writing it’s waiting for Burnley to hopefully slip up and leave the gap at a very healthy ten points. Either way, this is a massive gain and it feels like the upcoming pair of home games can now be approached with a sense of putting any relegation heebie-jeebies firmly to bed. Even a Bruce-esque return of points over the remaining seven games would probably be enough to see us safe, and thoughts can really turn to a bright future, with Howe talking about signing “more Brunos” in the summer.

Great nights under the lights, the Toon is once again bouncing and I love it.