Dermot Gallagher reviews controversial decisions in the Premier League after each round of games, on behalf of Sky Sports.

The former top referee has now given his call on this incident in the Newcastle v Leicester match.

Dermot Gallagher looking at a key incident, the circumstances when Newcastle United equalised on 30 minutes.

Trailing 1-0, a Shelvey corner is headed down by Dan Burn and Bruno Guimaraes gets a touch close in but Kasper Schmeichel blocks.

Bruno perseveres and a couple of touches later, the ball is in the back of the net.

Referee on the pitch Jarred Gillett disallows due to a supposed foul on the keeper by the Brazilian. However, VAR quickly intervenes, directs Jarred Gillett to the pitchside monitor and he overturns his original decision, giving Bruno and Newcastle the equaliser. 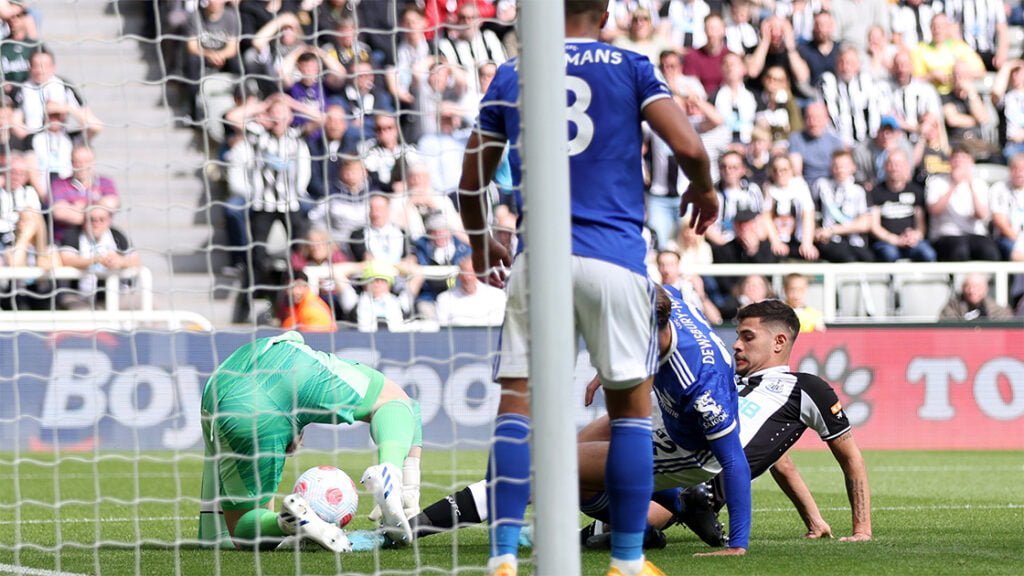 “Newcastle United equaliser against Leicester, initially ruled out for a foul on Kasper Schmeichel. Good use of the VAR here then?”

“Because I think the referee feels that he (Schmeichel) has got his hand on the ball, which he doesn’t. He (Jarred Gillett) gives a foul.

“If you look, there is clearly no foul.

“If you attacked a full-back like that, then you’d expect a goal. I think that is the key issue for me.

“VAR was really really good there, because the minute it happened and the goal disallowed, VAR immediately said (to the referee) don’t restart, need to check this.

“Looked at it a couple of times, no foul, said to the referee to go and look at the screen.

“In my opinion there is no foul.”

Shots on target were Leicester 2 Newcastle 7

(Match Report : ‘Message for Bruno Guimaraes after 2 goals and MOTM – I think that deal may already have been struck old son’ – Read HERE)

If you would like to feature on The Mag, submit your article to [email protected]themag.co.uk