I have seen some pretty astonishing comments from fans of other clubs, who completely lack any kind of self-awareness, however, this Chelsea fan takes the absolute biscuit.

I am talking about comments regarding our great club since the change of ownership in October 2021.

Random outsiders talking about what has happened at Newcastle United, since Mike Ashley finally was forced to relinquish control when the fans called time and Ashley had to give away 10,000 free half season tickets.

I thought I had seen it all until this reply from a Chelsea fan to this posting on Twitter following Newcastle’s 3-0 win at Norwich: 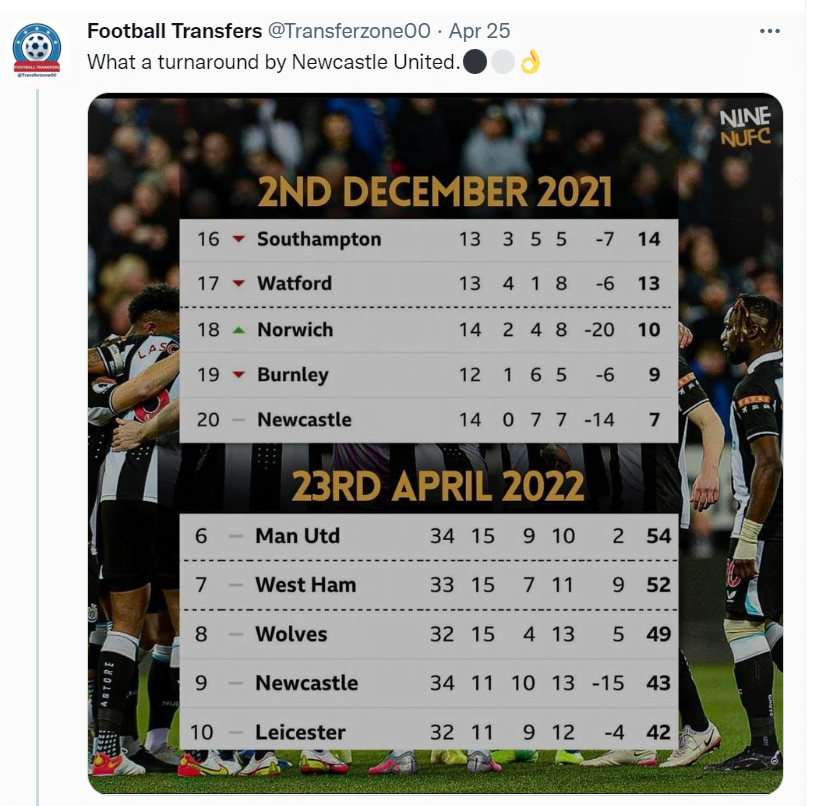 Response from a Chelsea fan…

These are just a few of the replies to the Chelsea fan, mainly from Newcastle United supporters:

‘Serious question… why are Newcastle United the only team that aren’t allowed, or so fans of other clubs would have it, to spend in transfer windows?’

‘We spent 90m on 5 players, having previously spent next to nowt in 14 years.

Where were Chelsea before Abramovitch started spending big?

How much has Chelsea spent over the same period? How much was Lukaku?’

‘Amazing what money can buy, I remember Ken Bates bought an almost bankrupt Chelsea for a quid.’

‘Being a Chelsea fan it must be wierd for you to see a club being bought, money get ploughed in and 20 years later having some of the best players in the world, Prem titles, FA cups and ECL trophies after watching others do it season in season out. Time for you to become Man U.’

‘WOW ! from a Chelsea fan that comment is unbelievable.’

‘Without Roman you wouldn’t be in the Premier League.’

And then the chelsea fan said “Amazing what money can buy!!!!!!!”

‘Before January 2022, no other club had brought a player from another team and all players played for free.’

‘lmfao imagine being a Chelsea supporter and saying this.

‘Now have a go at Everton and Villa and ask them about what their money bought mate.’

No doubt some of you will be thinking, surely nobody could be so lacking self-awareness, surely this Chelsea fan must be being ironic…?

Well, in my experience of meeting Chelsea supporters, I think I am still waiting to see any of them capable of irony and as for self-awareness…

Newcastle United spent around £90m on bringing in five players in January 2022, whilst Chelsea paid more than that solely on Lukaku last summer and have hardly even played him (cost £100m and only 13 Premier League starts for the cockneys so far).

Roman Abramovich came along and by my reckoning has bought them around 20 trophies these past 19 years.

Chelsea have won the Premier League title five times these past 19 years.

They have also on seven occasions in this time period got to the semi-finals stage of the Champions League and won the competition twice.

Chelsea didn’t even win a single trophy in their history until the year that Newcastle United won their last domestic one! In 1955 Newcastle picking up the FA Cup (their sixth, the tenth NUFC major trophy in all by that point), whilst Chelsea were picking up their very first league title and very first trophy.

As a Chelsea fan, you have seen Abramovich help fund transfers totalling well over £2billion in his time there distorting football. The Stamford Bridge club owe him at least £1.5billion and he is writing this debt off, after having been forced to sell the club, due to his close friendship with Putin.

What would be ironic AND very very funny, is if Newcastle United in these coming years at some point can dislodge Chelsea from their self-appointed (and completely paid for by Abramovich) membership of the Premier League elite.

When that happens, I wonder who this Chelsea fan and his mates will then switch to supporting?

What has Allan Saint-Maximin ever done for us (this past season)…?

Are these the Newcastle United players to keep? Should they stay, or should they go…