Earlier today we asked NUFC supporters: ‘As a Newcastle United fan what result do you want in Burnley v Everton tonight?’

The Premier League relegation battle now really hotting up with less than seven weeks of the season remaining.

Heading into the home straight, there are definitely four clubs at severe risk of taking the drop, with another three seen as also having a degree of risk still attached to them.

This is how the Premier League table looks ahead of Burnley v Everton on Wednesday night: 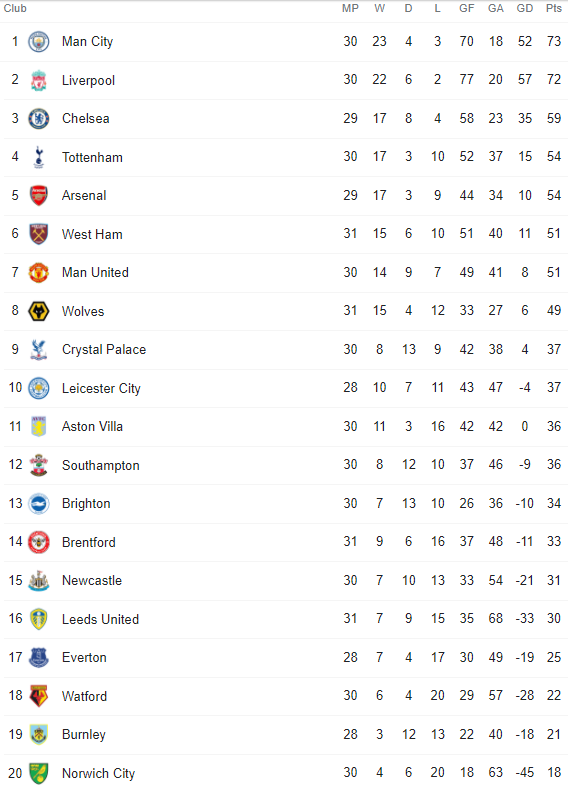 As you can see, it appears that Norwich look doomed, whilst Watford also look to have one foot in the Championship having played two more matches than the other two clubs most at risk.

It is an absolute humongous match at Turf Moor tonight, Burnley v Everton.

I was just wondering that as Newcastle United fans, what would you like to see happen?

Fair to say I think that an overwhelming majority of Newcastle supporters would pick Everton, if there was one club at the bottom end who they would like to see relegated.

However, how does that balance off with how safe you see NUFC at the minute.

An Everton win tonight would see the bottom three cut off by six points and I think very few people giving either Watford or Burnley any likely / realistic chance of surviving, plus of course it would mean Newcastle United still nine points clear of third bottom and ten points above Burnley who would have one game in hand.

A win for Burnley tonight would see Everton well and truly in massive trouble, only a point above the drop and with what looks a punishing schedule ahead.

However, Burnley winning would mean Newcastle United having only a seven point lead over third bottom Burnley and six points above fourth bottom Everton, who would both have a game in hand on NUFC.

So what did Newcastle fans collectively want to happen at Turf Moor tonight…?

The results are now in and our thanks to all of you who voted:

So, less than one if five of you going for the scouse mackems to win and ensure a ten points gap remains between NUFC and Burnley, plus a nine points gap still there to third bottom.

The most popular option being the coward’s way out, a point each for the two clubs and keep pretty much the status quo, for those clubs directly involved anyway, whilst for Newcastle United they would see both creep only one point closer.

Not far behind the 44% voting for the draw though, we had 37% going for the bold option of Everton losing.

An intriguing night awaits and I certainly will be watching Burnley v Everton, not Chelsea v Real Madrid!