Six wins on the bounce. Newcastle United at home. An absolute revolution.

The house that Rafa was building. The house that Steve Bruce left to ruin. It has been rebuilt. Rebuilt on a solid foundation of hard work, organisation and results.

Newcastle United were unchanged. Eddie Howe resisting the temptation to change a winning team no matter how knackered they looked at 4pm on Sunday.

Crystal Palace were fresh off a predictable semi-final beating off Chelsea. Conor Gallagher returned to the team to bolster a midfield which was missing another young star, Eze amongst five changes. It was also my first glimpse of new England left back Tyrick Mitchell. Now that I have seen him, I expect Gareth Southgate to be on the phone to Matt Targett soon.

NUFC were positive and busy from the word go. Almiron wasted a great chance in the first few minutes, his lack of a right foot costing him as he burst into a gaping hole in the penalty area. His lack of a left foot wasn’t much better. I can say that now with a tinge of irony, I couldn’t at the time.

Maxi was cutting across the Eagles defence at will and equalled Miggy’s dribbler with a backpass of his own. An Almiron shot hit an outstretched arm in the penalty area. MOTD said the arm was “by his side”. It absolutely a hundred percent wasn’t. Chris Wood went through, never looked like scoring, didn’t and was offside anyway.

Palace for their part were on the back foot and looked a little cagey. It got worse for them after an altercation between Zaha and, well, everyone else on the pitch. Upset at not being allowed to showboat his way to anywhere he wanted, Zaha became increasingly frustrated by his own lack of threat. He decided to his get handbag swinging, first waving at Krafth, then Bruno, finally going for the smallest person on the pitch and trying it on with Almiron. I thought that might inspire Palace to show a bit of mettle. It didn’t. It had the opposite effect. They obviously don’t like Zaha much either.

A few seconds later United took the lead. A super ball from Bruno saw Miggy racing neck and neck with Mitchell to the bouncing ball approaching Palace’s penalty area. Miggy outpaced the England full back, then even more bizarrely beasted him and one final surprise, hit an absolute beauty of a curler, not into the Milburn Stand, but into the top corner of the net off the bar and post, which I always love. A marvellous goal celebrated by every player on the pitch and all four sides of the ground. Almiron was booked for taking his shirt off and showing us what looks like a Batman tattoo. It was the goal that kept us in the Premier League. With five games to go. Incredible.

Miggy tested the Palace keeper once more before half time and Palace had a chance after JoeLinton gave the ball away on the edge of the NUFC penalty area. Burn and Schar did that too at other times in the match but Palace were unable to make anything of it. Story of their night really. 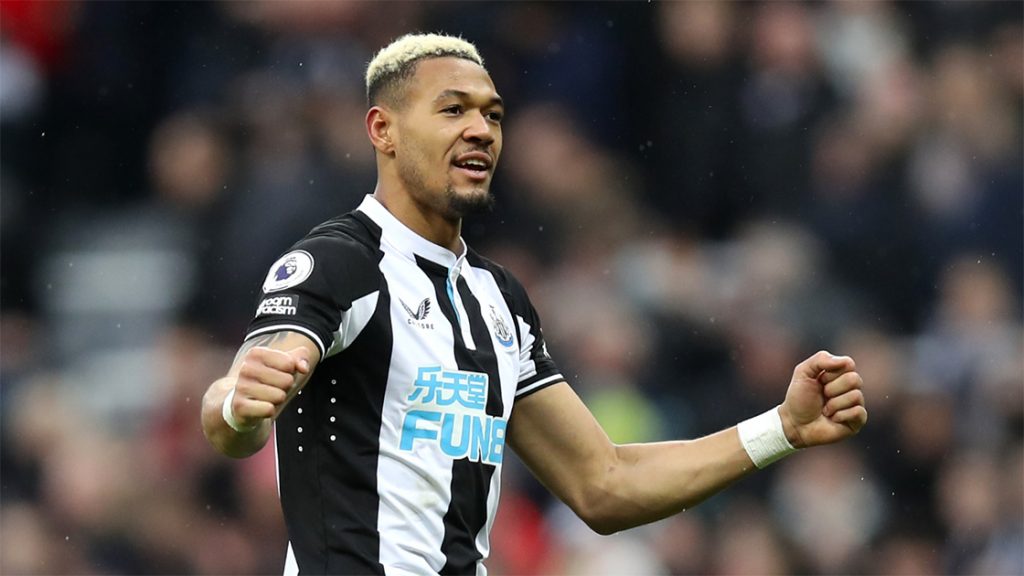 ‘JoeLinton’s head: Not worth £40million’

The second half should have started with the Toon going 2-0 up and the game being made safe but it didn’t. One of the thousands of fouls punished by the referee saw Targett float a quality free kick right into JoeLinton’s face five yards out. Targett was of course aiming for JL’s head but the Brazilian seemed to duck into the ball and head it into the ground and wide. Who said he was a striker? Well let’s just say he cost £40million and was far from brilliant there.

Gallagher went off in a huff as Palace made all their substitutions before the hour. Zaha put one wide when he probably should have scored, a couple of headers in our penalty area were better chances than the attempts at goal showed. Zaha put one over the bar in the last minute but neither he nor it, ever looked like a goal. For the main part, Palace played pretty football and got nowhere, except thirty yards from our Leazes End goal.

The referee even got bored with their lacklustre efforts and only added on three minutes of extra time despite Krafth alone wasting at least five. Good man. NUFC stopped trying to score and accepted their fate. Another 1-0 win. Murphy, Willock and Longstaff replaced Miggy, Maxi and Bruno, thus confirming that another goal would be neither attempted nor required. It was boring to watch. Boring in a delightfully successful way. When we scored we won. Again.

Crystal Palace are just another one of these mid-table teams who United have beaten recently. As with Villa, Brighton, Wolves and Leicester, Palace were capable of better ball retention than Newcastle, well organised and with good players who had the potential to hurt us. All of these teams are quick on the ball, incisive in midfield and generally all good at moving the ball across the pitch quickly. For the middle fifty metres of the pitch, they are excellent, but it is the ends of the pitch where the game is won. Unless you are Barcelona ten years ago where total control of the ball means total control of the game, it is the penalty areas where games are won and lost. And none of these mid-table teams have created good chances and ever looked like scoring enough goals to win the game. In every single one, NUFC have scored and created more and better chances, without two of our best attacking players in Trippier and Wilson.

What this suggests is that Eddie Howe doesn’t yet have to concentrate too hard on controlling the play at home. Having a defensively resolute and organised team is keeping the goals conceded down, having quick and creative attacking players is creating chances. Not loads, but enough. Away from home is different, United haven’t yet got the balance right away from SJP, it is too scattergun, pays off sometimes and we win, falls apart other times and we lose. Getting that balance away from home may be Howe’s biggest challenge in the summer. 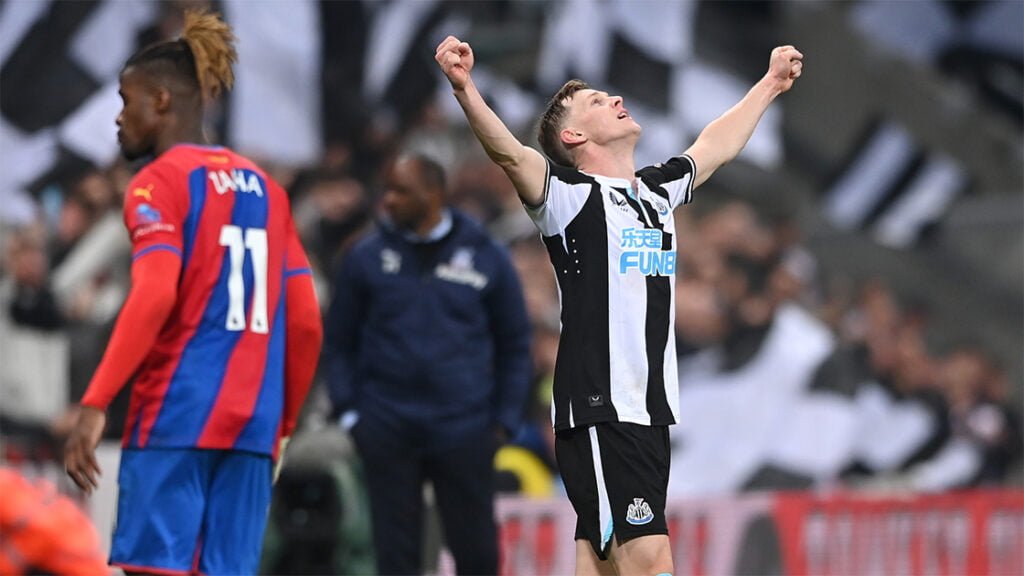 It will also be interesting to see how United get on against Norwich on Saturday and Liverpool, Man City and to a lesser extent ,Arsenal after that. Norwich at home was a low point in the season. A must win game which we didn’t and left the team staring relegation in the face, it will be interesting to see how the team plays in a more pressure free environment having escaped relegation. Liverpool and Man City will be sterner tests but interesting all the same. How effective will this resilient, counter attacking style be against the top teams? Maybe Maxi will shine. No one can convince me that he shone against Palace. He is one of my favourite players in black and white when he gets going. It’s been a while though. Never mind, as we have seen over the last few weeks, what we have when he is off form is good enough against a lot of teams in this league.

Another part of the team which has proved to be too good for the mid-table teams is United’s strength. Arsene Wenger once famously called the black and whites “a team full of men” and this team is very similar. Good in the air, strong across the pitch (including Miggy who out-muscled someone for the first time in his career on Wednesday) and probably most importantly, not afraid to unsettle the opposition by, well, kicking them. For Palace, the likes of Gallagher and Zaha are excellent players but at SJP they most definitely did not like it up em.

All of NUFC’s players are happy to push, barge, pull a shirt, tap an ankle, kick a calf and generally bully the opposition. Patrick Viera must have been purring on the Palace bench. No player does it more sneakily than Bruno, no one more obviously than Dan Burn, but against Palace no one more effectively than Targett and whoever is now claiming to be Emil Krafth. The Swede particularly single-handedly marked, or whatever you want to call it, Zaha out of the game. Zaha had thrown his toys early in the first half and spent the rest of the game picking fights or being ballboy. Gallagher was booked and subbed for being unable to keep up with Bruno. Few teams have coped with Eddie Howe’s unsettling tactics. Palace certainly couldn’t.

So what now we are safe? I’ll happily put to one side talk of next season and the press linking the club with anyone who is looking for a massive payday. As Howe says, maybe he has less money than people think. I know how he feels.

On the pitch there are five games left to enjoy, whatever the score or result. They should all be worth watching, except perhaps the last one at Burnley which may only be worth watching if it relegates Everton. Before that, who knows? Maybe the house will become a fortress and we will beat Liverpool. Not that any of that really matters.

For the last five games to not all be relegation must-wins is an amazing achievement by everyone at the club, players, coaches, owners and fans. I still can’t believe it now.