Allan Saint-Maximin is looking around for the competition

It’s only me again, talking about Allan Saint-Maximin, yet again.

Something which I will keep on doing, whilst there are idiots amongst the Newcastle United fanbase making crazy comments about him, that have no foundation in fact / reality.

I hear certain fans saying that Jacob Murphy or Matt Ritchie should play against Wolves and Allan Saint-Maximin be dropped. Quite unbelievable.

Yes, if Eddie Howe in the summer wants to sell Allan Saint-Maximin and use that money towards bringing in better creative goalscoring players, I won’t be complaining.

However, the way some of these Newcastle fans go on, you would think we had some real top quality replacements on the bench who would for sure do better than ASM.

He hadn’t started a game for seven weeks and had barely been able to join in with training for most of that time, yet was still by far the biggest / only real threat in that first half at Tottenham (least said about anybody in the second half the better).

Honestly, when you look at our bench in particular it is a harsh reminder of just how poor a squad Eddie Howe inherited. Yes, obviously the injured Trippier and Wilson would walk back into this current NUFC team but it is pretty desperate when you look at those others who aren’t getting a game under Eddie Howe. Yes we have honest tryers but way below what Allan Saint-Maximin gives us, on average. Yes he doesn’t deliver every game but then which of these current Newcastle players does???

This is an updated table from the Other14 who specialise in stats from the 14 clubs that are not part of the self-proclaimed ‘big six’ in the Premier League: 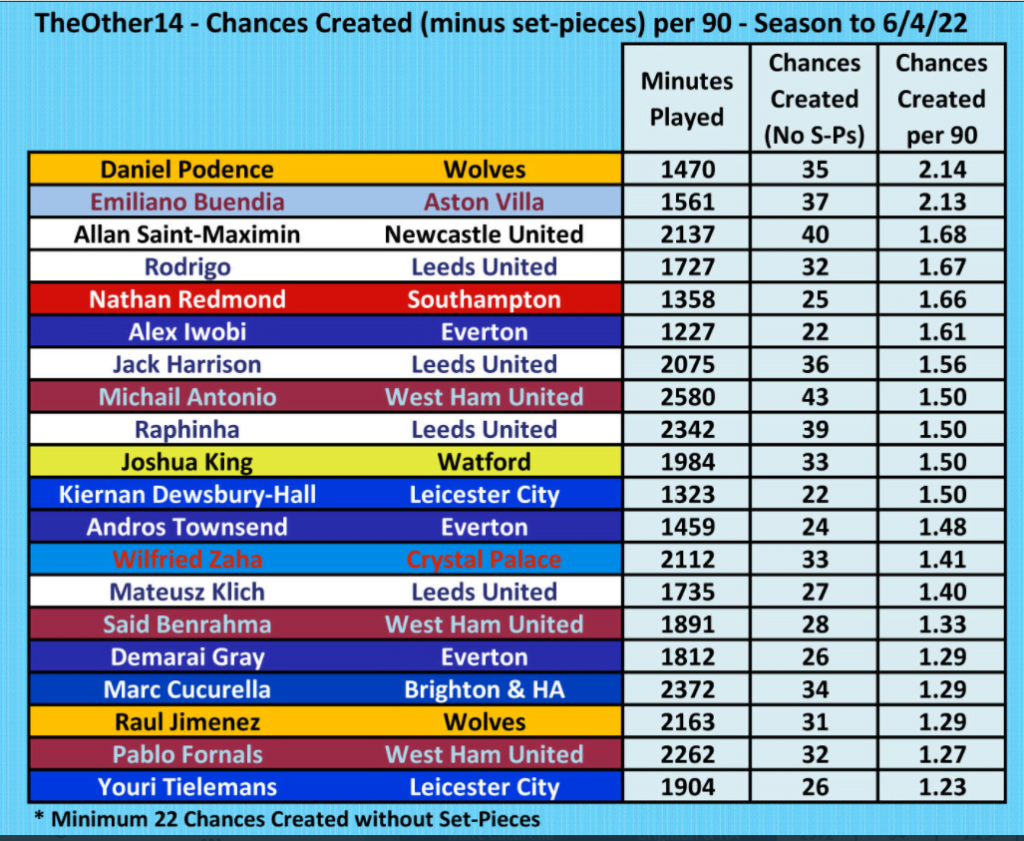 As you can see, only Michail Antonio at high flying West Ham has created more chances than the 40 Allan Saint-Maximin has done.

Whilst when it comes to average chances created compared to number of minutes, only two ahead of ASM, Podence and Buendia.

Most importantly of all though, from our point of view, is that there isn’t even a single other Newcastle United player who features anywhere on this list of those creating chances.

You frequently see some of the NUFC lunatic fringe talking about Allan Saint-Maximin as just a show pony with no real end product, yet countless stats disprove that, not least the chances created one above. As well as the way he gets the team up the pitch time after time, progressive yards up the the pitch plus countless free-kicks won in the process in decent positions.

What about goals though?

Well here are the Premier League goals scored by those midfield players and strikers currently at Newcastle United, in the past 14 months from 21 February onwards:

Well, Wilson is out injured, Wood has only scored once for Newcastle since he arrived, whilst Willock only has two these past 11 months or so since his hot streak at the end of last season. Plus injury doubts on Willock’s participation tonight.

So the Newcastle United fans who are desperate to see Allan Saint-Maximin dropped, want us relying on say Almiron or Ritchie, who haven’t scored a goal between them for almost 14 months.

Indeed, this is a team / squad overall that is desperately short of goalscorers, so even on that count along, scoring goals, ASM has to be in the team. Never mind all of the other countless positives / stats that he brings to the party.