The Newcastle United players picked up their latest win on Saturday.

Eddie Howe’s team enjoying their biggest winning margin of the season (so far…) at Carrow Road.

The 3-0 win over Norwich taking NUFC to ninth place in the table and 43 points, a quite remarkable transformation under Howe.

That was four wins in a row for NUFC and always interesting to get an outside perspective on the Newcastle United players.

The whoscored ratings use data from every single Premier League match, over 200 raw statistics included in the automated calculation of a player’s rating, weighted according to their influence within the game.

Every event of importance is taken into account, with a positive or negative effect on ratings weighted in relation to its area on the pitch and its outcome.

Now whoscored have published their latest Premier League team of the week and it includes three Newcastle United players, the full team PL below and then their explanation of why the NUFC trio were included: 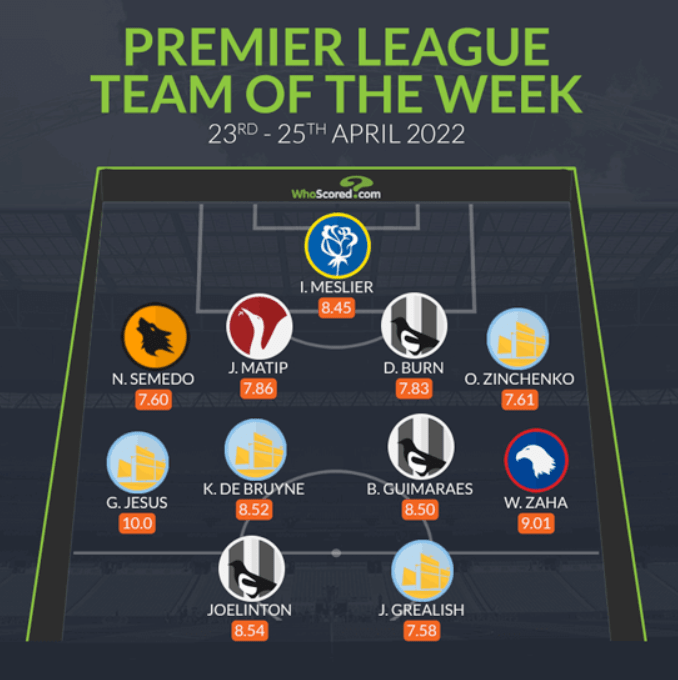 Joining Matip at the heart of the defence is the first of three Newcastle players. Dan Burn put in a solid shift as the Magpies eased to a 3-0 win at Norwich on Saturday. The towering centre-back dealt with the Canaries’ attacking threat with ease as he made six clearances, four interceptions and one tackle to secure his spot in the side with a WhoScored rating of 7.83.

Bruno Guimaraes scored his fourth Premier League goal of his career in Newcastle’s 3-0 win at Norwich as the Brazilian continues to shine for the Magpies. Guimaraes put in a shift out of possession as he made three interceptions, two tackles and one clearance, and was excellent when on the ball as he found a teammate with 94.6% of his 56 passes to partner De Bruyne in the middle of the park with a WhoScored rating of 8.50.

Of the four goals Joelinton has scored in the Premier League this season, two came in Newcastle’s 3-0 win at Norwich on Saturday. The 25-year-old found a way past Tim Krul with two of three shots, and made one tackle, to help earn a WhoScored rating of 8.54.

Nice to see Dan Burn getting recognition, as well as our Brazilian duo who took most of the headlines after Saturday’s match.