The long trip to Southampton is rarely a satisfying one. At least, I’d imagine it isn’t.

It’s actually the Newcastle game most local to me when we’re not in the same division as the likes of Bristol City and Cardiff City.

I try and get to this Southampton away fixture most years but maybe I shouldn’t bother, as our record is dismal when I attend.

I missed the 1-0 victory when ASM snatched the winner as it was during my boycott years. Prior to that though I’d witnessed the most boring game in the history of the sport when we drew 0-0 down there a few years ago. I saw us get battered and be lucky to only lose 3-1. That was the day that we chanted, ‘we’ve had a shot’ after finally doing just that. We later managed to upgrade that to ‘we’ve scored a goal’.

Before that were back-to-back 4-0 drubbings. Those two games were only six months apart!

I went to a few games at The Dell as a kid but don’t remember those ones too well. I know I was there when we lost 4-2. In the Premier League era we’d only previously won two of our visits to the Saints and I’d seen neither of them.

All in all, not a very fun place to visit and a mammoth trip for a Geordie, especially on a Thursday night.

A colleague that sits opposite me at work is a Saints fan and he was adamant that if Salisu started they would win. His prediction was 2-0 if Salisu started and 3-1 to us if he didn’t. What a swing based on the availability of one young defender. He also informed me that his team hadn’t lost at home since September. Well, we’d never beaten Brighton in the Premier League until last weekend and no one has ever survived a Premier League season after as bad a start as we had. Records are made to be broken…

I left work an hour early but, despite giving myself three hours to achieve a two-hour journey, I made hard work of it.
I got to the car park with twenty minutes to spare and a twenty three minute walk ahead. I didn’t want to miss the beginning of this, so I tried to get into my most powerful stride and was making good time until I hit a pack of Saints ambling along at the pace of 2020 vintage Joelinton. I tried to muscle and twist my way through a la 2022 vintage Joelinton but the throng was too thick as we entered a narrow path. Instead, I was surrounded by dodgy, wannabe-cockney accents chirping away until the path opened up again and I could navigate around them.

Reading that ASM and Joelinton were not only out of the first team, but the squad altogether, was worrying. It did mean a highly anticipated first start for Bruno though.

I reached the stadium five minutes before kick-off but then found that I was by far not the only one to have got there last minute. Over a hundred people were snaked in front of the entrance queuing to get in. By the time I reached the turnstile there were hundreds behind me. I got in three minutes late. Not bad going.

The early stages of the game we appeared to be in the ascendancy but with little created. Murphy was in the book with little more than a sixth of the game played, scything down Walker-Peters as the full back tried to get away down our right flank.

The first scare came when a ball over the top evaded the usually impenetrable Dan Burn and landed at the feet of Broja. Dubravka did enough to put him off and maybe got a touch as a corner was given. Either way, the ball ends up over the bar and the corner came to nothing.

There were two major themes in the first half. Our insistence on allowing games of pinball in our own box and the switching fortunes of Bruno. I’ll come onto the pinball shortly.

Bruno was finally making his first start for the club, a month and a half after signing. Everyone was excited about what the diminutive Brazilian could produce. In the first half he alternated between creating moments of magic to appearing out of his depth and struggling with the physicality.

In the middle of the pitch, he played clever flicks to evade challenges and spread the ball well at times. At one point in his own box, he wriggled back and forth to try and elude Southampton pressure, before managing to get the ball clear in a composed fashion. Class that he can play that way without fear but it could go wrong and wasn’t good for the tickers of those watching.

You can tell he’s a quality player and made some blocks and stops around the box too. However, there were other times he seemed a little overawed and gave the ball away cheaply or was muscled off of it. First start though and he’s looked excellent in a couple of his cameos, so I have no doubt there’s so much more to come. If all four Newcastle centre midfielders are fit for Chelsea, I have no idea which three will be selected.

The pinball factor I mentioned led to the first goal. There were multiple moments in the first half where we watched the ball bouncing back and forth off attackers and defenders alike and Stuart Armstrong took advantage of one. Walker-Peters whipped a ball from the left which three players went for but a Southampton man won and headed back across to Armstrong. The header from Armstrong hit Dan Burn’s midriff to steer it past the helpless Dubravka.

That is of course the Dan Burn who hadn’t been signed when we were first drafted to play Southampton. Shall we not count that goal then, Ralph? The absurd Austrian must have been quivering at the perfection of it. Karma coming back to bite us for manipulating the rules by allowing too many players to get injured or contract Covid.

There was a brief chorus of, ‘you’re not singing anymore’ from the Saints lot but after we’d recovered from our shellshock, we soon drowned that nonsense out.

And then a moment we’ve all been waiting for.

A curling ball in from Shelvey on the left-hand side, met by the towering should-be-illegitimate player Chris Wood to head past Fraser Forster. Eight games into his Newcastle career and he’s finally off the mark. 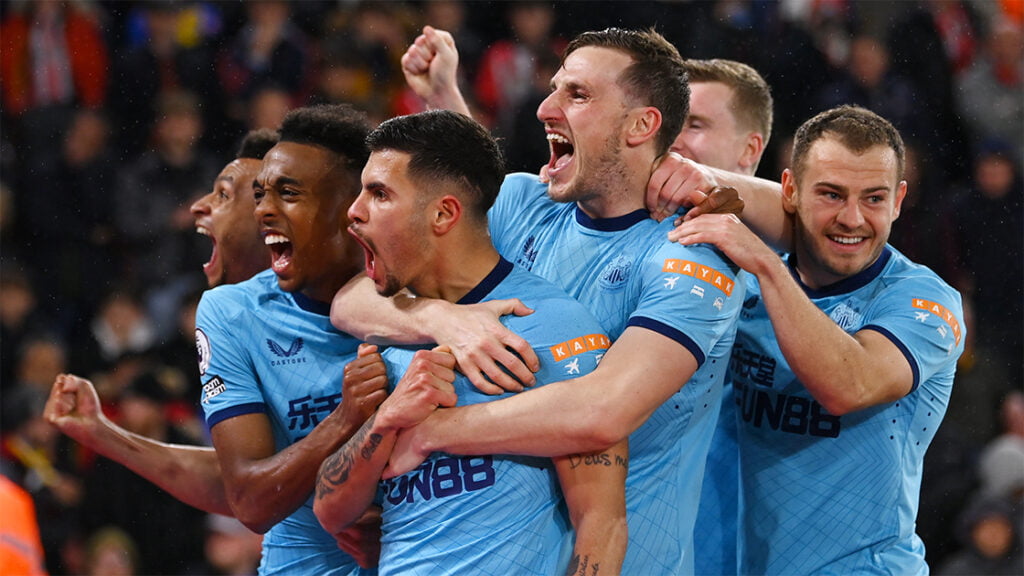 I’m well chuffed for him. He’s worked hard every game and we’re unbeaten since he joined. Let’s hope he can get a streak going and maintain his record of double figures in Premier League seasons.

Another round of pinball culminated with Che Adams cannoning the ball off the underside of the bar, before a sumptuous cross from Bruno was headed over by Willock eight yards or so from goal.

At half time we’d only had one shot on target and three shots overall. We looked organised as ever and the players, whilst not always showing great quality, were working their socks off to a man.

I ended up enveloped in a cuddle with about eight of my peers and toppled over the seats behind me onto a fan mattress. It’s my first away game of the season and there’s nothing like getting a bone breaking hug from absolute strangers as you revel in shared joy. You could be two people that would absolutely hate each other if you worked together or were locals at the same pub. But in that moment, you’re the best of friends sharing a moment you’ll probably talk about for years. THAT Bruno goal! 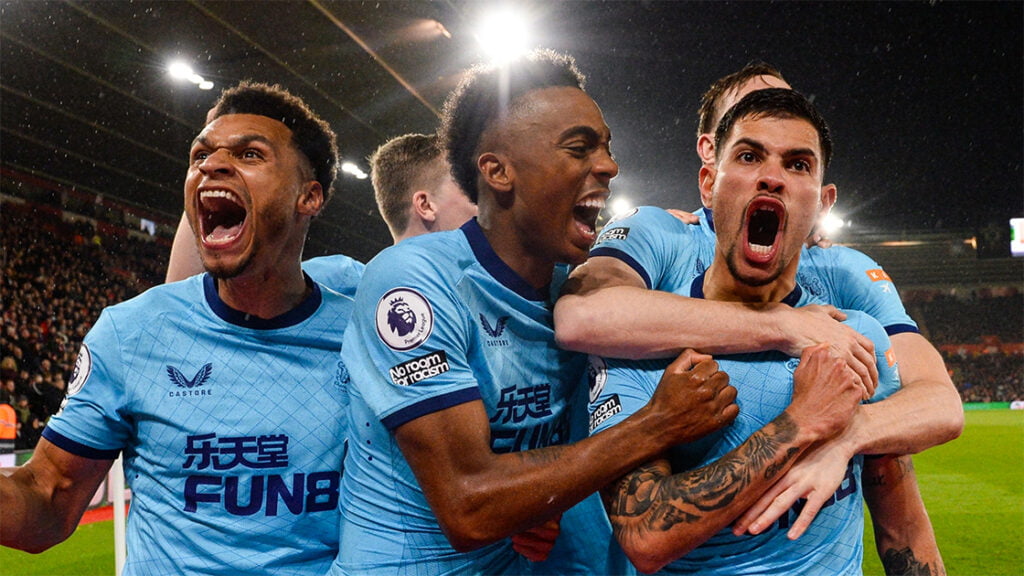 From then on it was party central. Brazil flags waving voraciously, ballads bellowed vociferously. If the Southampton fans didn’t know before, they’ll now be more than aware that Bruno is flipping magic and that Eddie is our king.

We had further chances but quality let us down. A pull back from Willock to Shelvey was hit badly. Murphy got free when Salisu, who was excellent in Southampton’s backline, slipped. Murphy had more time than he realised to pick a pass. With options coming to join him he just needed to keep a cool head. I’m not sure if he realised his pursuer had bailed over and he snatched at his cross which went to nobody.

Dubravka made saves at the other end. There’s nothing worse than being the opposite end of the ground when there’s a pinball moment in the goal you’re defending. You can’t tell where the ball is half the time and you’re just waiting to hear the home fans erupt but then you’ll see Dubravka fall to the ground clutching the ball to his chest, or a player will hack the ball clear, and it’ll be your lungs that are emptied with glee.

There was nothing to worry about really,  2022 Newcastle United don’t concede two goals in a game.

With a few minutes to go the Saints fans were leaving in their droves. Two were so annoyed about the result that they started a hearty fistfight that had to be stopped by about fifteen stewards.

Somehow six minutes were given as added time. They must have added an extra second for every time Hasenhuttl whispered to the fourth official, ‘he shouldn’t be playing.’

We saw out those added minutes and the carnival continued as barely any of our fans made for the exit and sang repeatedly to the staff and players that came to show their appreciation. You could see how enamoured they were by the levels of love, support and gratitude we roared in their direction. Jason Tindall couldn’t stop smiling and occasionally mimicking the gestures we were making as we told everyone in Hampshire and the surrounding counties that it’s up the Premier League we go.

We didn’t want to leave and the players and staff didn’t want to walk away from us. It was several minutes of mutual appreciation shown by both entities. We demanded a club that tries and boy have we got it. 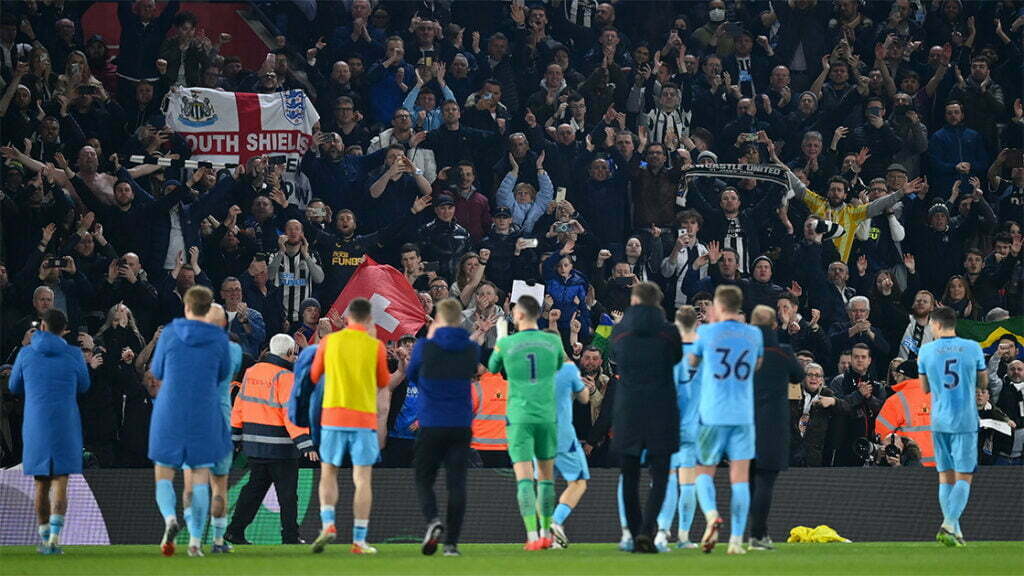 One last thing, if anyone finds my voice at St Mary’s or the surrounding area, can you please let The Mag know so that it can be returned to me.