The Premier League relegation battle is warming up nicely.

With around a third of the season remaining, what looked a four club battle has now swiftly expanded into one with seven clubs involved.

Everton, Leeds and Brentford now all fully inside the Premier League relegation fight for survival, along with Newcastle United, Burnley, Watford and Norwich.

Tuesday night (last night) saw a rearranged match take place, that could have had a real impact on the Newcastle United (and others) path to potential PL survival.

At Turf Moor, it was Burnley v Leicester (7.45pm) in the Premier League.

Burnley had picked up seven points from their last three Premier League matches, including wins over Brighton and Spurs. In contrast, Leicester had only picked up two points so far in 2022 and now PL wins since December 2021.

A win for Burnley would have seen them rise three places to fifteenth, whilst even if just avoiding defeat, Sean Dyche’s side would have put Everton in the relegation zone.

Leicester were the better side but it looked nailed on for a goalless draw and the blue scousers dropping into the Premier League relegation zone, that result would have also meant Newcastle only three points above the drop. However, two goals in the final eight minutes from Maddison and Vardy gave Leicester a long awaited PL victory.

As you can see from this up to date league table on Wednesday morning (2 March 2022), that result has significantly impacted the relegation picture: 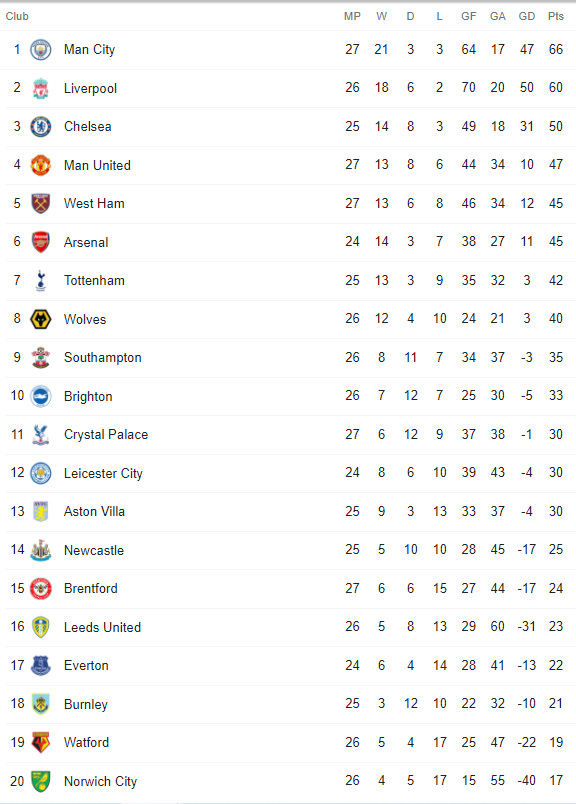 The next two and a half weeks are set to be potentially pivotal, with a lot of matches affecting the Premier League relegation fight, before the international break.

As you can see from the scheduled fixtures for each of the seven relegation candidates below, these upcoming matches could make or break them. As things stand, the games below include five fixtures where relegation candidates are playing each other, although the Watford v Everton one will be postponed if the scousers win their FA Cup on Thursday against Boreham Wood.

Palace winning last night in the FA Cup has meant their game at St James Park has been postponed, as the FA Cup quarter-finals take place the weekend when NUFC were due to play them on Sunday 20 March. So Newcastle look set to have four and not five matches before the international break, with Brighton at home, then a run of away matches.

In 18 days time, by the close of Sunday 20 March, the following Premier League matches are scheduled to have taken place:

Newcastle United: Brighton (H), Southampton (A), Chelsea (A), Everton (A)