Premier League clubs and their owners.

What makes a good (or bad) owner in this modern era of football in the English top tier.

Nick Harris is responsible for the excellent Sporting Intelligence website and Twitter account, which describes itself as: ‘A perpetually sceptical attempt to make sense of sport’s relationship with money. Interested in conmen and numbers. Reassuringly grumpy.’

In his latest venture, Nick wanted to, amongst other things, find out what fans thought of the owners of their own clubs.

Nick Harris asked via many independent Premier League club sites / social media, including The Mag, for fans to answer a multitude of questions.

Over 10,500 fans of the 20 Premier League clubs responded and as you can see below, you can find out where Newcastle United find themselves in the table of 20 clubs, when it comes to approval of owners.

This is a brief explanation by Nick Harris of what, in part, he was setting out to try and achieve / discover:

‘What constitutes a good / bad owner in English football has been thrown under the spotlight in recent weeks by the ongoing chaos at Chelsea with Abramovich putting the club up for sale, and other geopolitical ownership issues.

These developments coincided with me overseeing a huge piece of research from late January and into last month about good & bad owners (initially in the Premier League); an independent regulator; and what fans really want from their clubs’ custodian.

More than 10,500 fans of Premier League clubs took part, at an average of more than 500 fans per club, answering questions from whether they think their owners have done a good [job], to whether they want a regulator and what powers it should have. SO MUCH DATA.’

This is the table of best owners as voted for by fans of each current Premier League club (the criteria is most recent owners who have been in charge for at least one full year, so for Newcastle United fans voting / reacting it was with regard to Mike Ashley, not the new / current ownership): 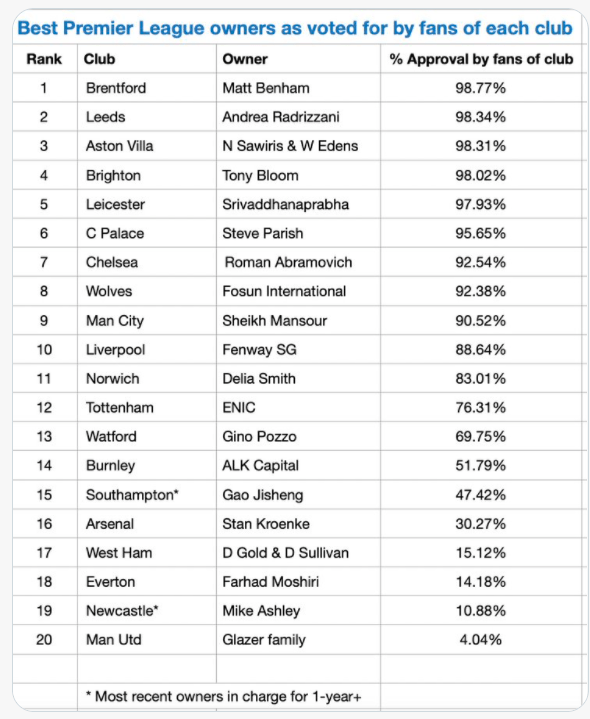 As you can see, Mike Ashley pipped for the title by The Glazers.

Yet again a case of ‘So close’ for Newcastle United fans, bringing back memories of 1995/96…

This is the summary that Nick Harris / Sporting Intelligence has given, regarding Newcastle fans reacting to Mike Ashley’s ownership: 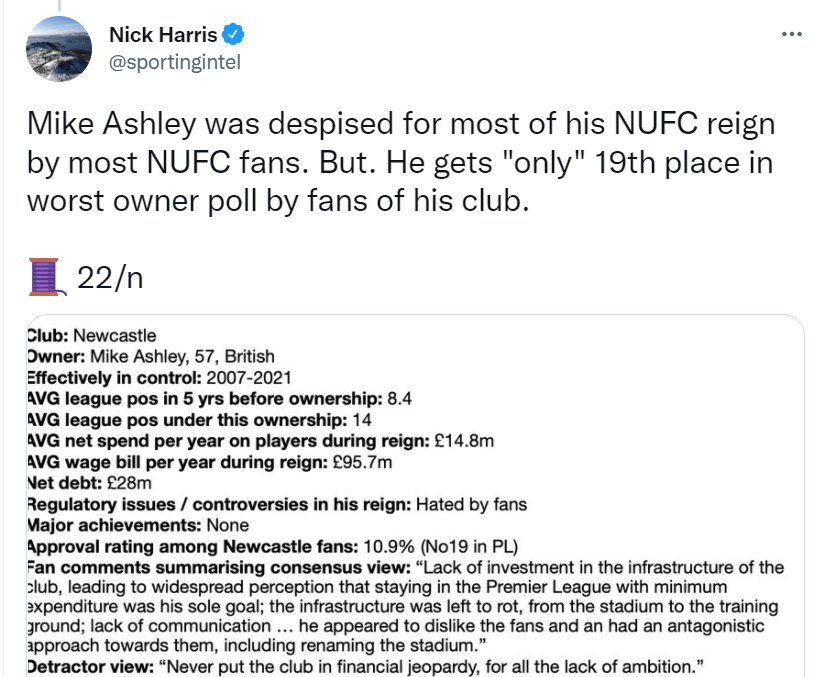 Using the entire club as one huge free advertising billboard for so many years, purely to benefit himself and his retail empire, at the expense of the club, would be massively high for me.

Whilst I totally disagree with the idea that Mike Ashley ‘never put the club in financial jeopardy’, the fact he relegated NUFC twice in only 12 (full) Premier League seasons and came close to relegating Newcastle United on so many other occasions, including the current one for sure if he had stayed. Only getting so lucky that Chris Hughton and Rafa Benitez did such superb jobs, NUFC could easily have otherwise ended up as another Leeds or Sunderland(!) and faced financial disaster due to Ashley’s recklessness and neglect.

Then here is the Man Utd fan overview regarding the Glazers: 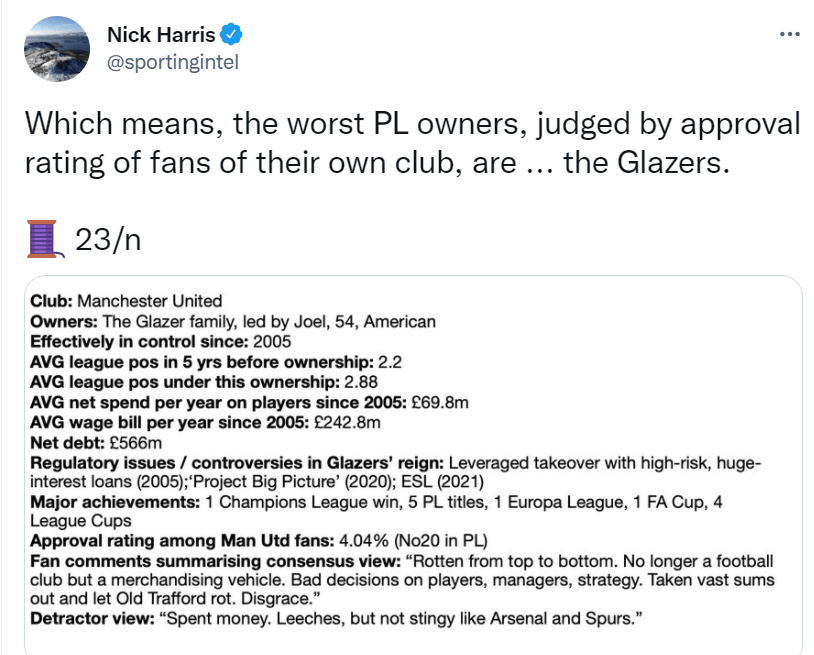 You will not find many (any???) Newcastle United fans having any sympathy for Man U supporters.

However, it is pretty impressive to see the job the Glazers have done in terms of their own greed and stupidity in the running of a club which is a money making machine due to all their glory hunting fans.

Taking control in 2005, in their first eight seasons the Glazers managed to continue the success with Sir Alex Ferguson, winning the Premier League five times and second in the other three, plus winning the Champions League and losing finalists on two other occasions.

When we get to May it will be five seasons without any trophies for Man Utd and in the most recent nine seasons they will have won three trophies – one each of FA Cup, League Cup and Europa League.

As Newcastle United fans we would be more than happy but for Man U fans they have seen the Glazers absolutely milk them, Mike Ashley must be so jealous! All the massive financial advantages Man Utd have and instead the owners simply benefit themselves.

If Man Utd and Man City had swapped owners these past 15 years or so, the reds would have been utterly dominant, probably winning the Premier League pretty much every year and I think winning five or six Champions Leagues.

The figures are mad, in terms of the respective owners and the finances, the Man City owners have put in well over a billion pounds so far, whilst the Glazers have cost Man Utd over a billion. When it comes to factors such as money the owners have taken out of the club and the interest the club is having to pay year on year, due to how the Glazers bought the club.