The 2020/21 season would prove to be the final one for Mike Ashley at Newcastle United.

The multi-billionaire bringing shame on the club when dealing with the Covid situation, including furloughing as many normal staff as possible, for as long as possible.

At one stage the entire scouting and recruitment staff on furlough, including top man Steve Nickson.

Though maybe that should come as little surprise when you consider that in the final 13 months when Mike Ashley owned Newcastle United, only one player (Joe Willock) was signed across two transfer windows.

The owner inviting a third relegation in his 13th Premier League season, his latest stooge / patsy Steve Bruce then overseeing zero wins in the first two months of the 2021/22 season. Salvation thankfully coming when the consortium bought Mike Ashley out and then sacked Steve Bruce, replacing him with the excellent Eddie Howe.

If you still don’t believe just how far Mike Ashley dragged down our great club, have a read below.

This sums up the total lack of ambition shown on and off the pitch for Newcastle United under the previous owner’s reign, Mike Ashley only interested in how he could use the football club to benefit himself and his retail empire.

The Deloitte Football Money League 2022 has now been published, the football finance experts revealing their latest yearly overview of which clubs in the World generate the most money.

The report covers the 2020/21 season, with Deloitte as usual given access to the figures from (most) clubs, despite some clubs not having published their accounts as yet for that campaign.

However, the new Newcastle United owners have given Deloitte the necessary 2020/21 season financial info, ahead of publication of the official accounts for last season at NUFC.

This have revealed what the Newcastle United turnover was in the final full Mike Ashley season.

The top 20 of the newly published Deloitte Football Money League 2022 report (***All figures are in euros) covering the 2020/21 season: 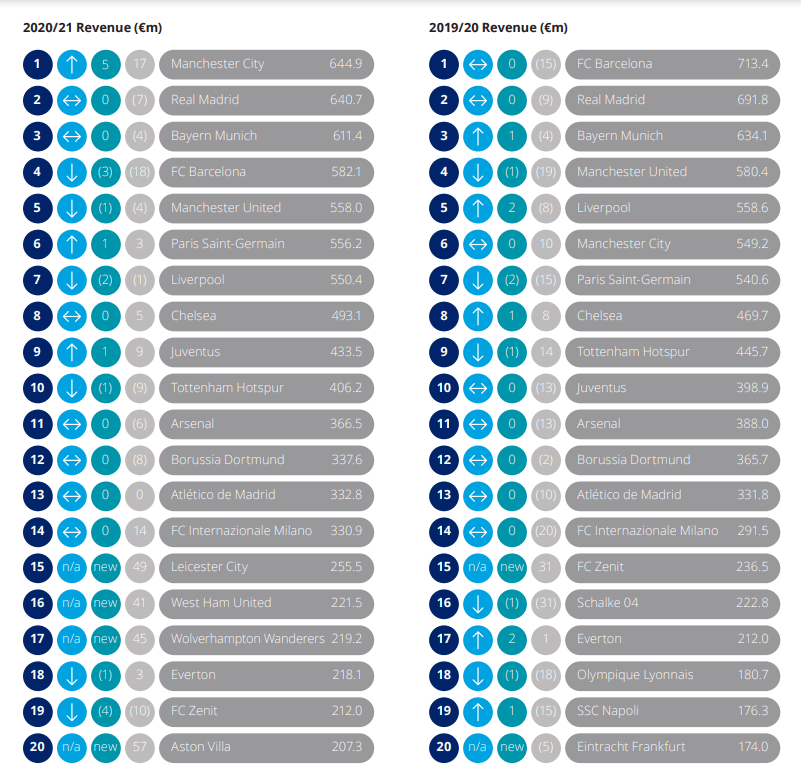 Places 21-30 of the newly published Deloitte Football Money League 2022 (***All figures are in euros).

So basically, this is how the past three seasons would have seen Newcastle United in the Deloitte reports if Mike Ashley had provided the figures for the 2020 and 2021 reports:

When it comes to how this then ranks Newcastle United in terms of turnover compared to the other Premier League clubs in that final Mike Ashley 2020/21 season:

Quite remarkable that despite Mike Ashley running Newcastle United with zero ambition and only one campaign in Europe in the 15 seasons since he bought the club, that the turnover still remains at such a high placing compared to those other clubs in Europe.

HOWEVER, this is down to overwhelmingly the Premier League TV contracts that generate more cash than any other European league. Whilst the drop of seven places shows how massively Newcastle United’s matchday revenue plays its part, without fans at games, this helped send NUFC tumbling down the top 30.

This is how the final 2020/21 Premier League table ended up: 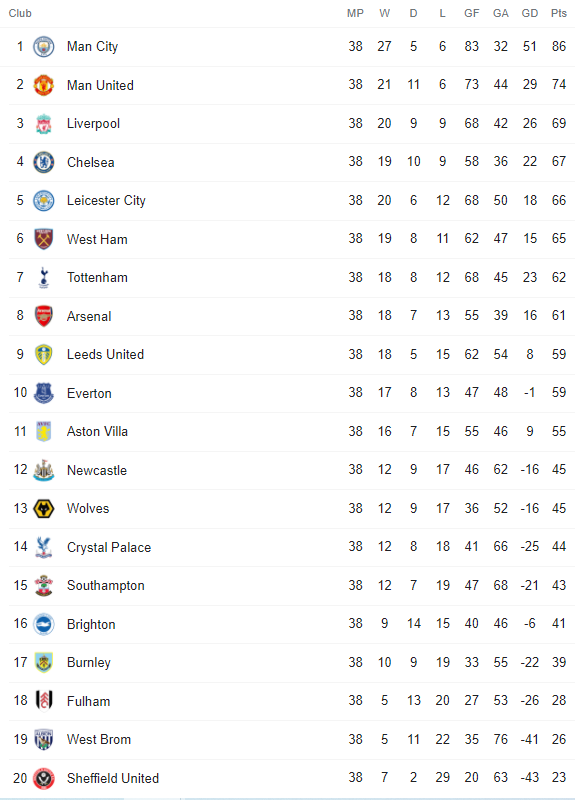 So when you look at this Premier League table for last season, you can see that the relegated clubs Fulham, West Brom and Sheffield United all had lower turnovers than Newcastle United last season.

However, the only other Premier League clubs to generate less 2020/21 revenues than NUFC were Burnley, Brighton and Crystal Palace, who also finished below Newcastle in the league, so would have received less money than United when it came to the share of cash based on league position.

Yet, the likes of Southampton finished below Newcastle in the final Premier League table but above NUFC when it came to revenues. Wolves are the same but in their case it was a massive 49.1m euros higher than Newcastle United!

Until we see the full Newcastle United 2020/21 accounts we won’t get the full picture and there could be certain unknown factors that have impacted on the NUFC figures BUT difficult to see how that explains such a huge distance behind even a club such as Wolves. No disrespect to them, as their owners were showing the ambition Mike Ashley refused to do, however, in the past it would have been unthought of for the likes of Southampton and Wolves to be above Newcastle. The same with pretty much every other club apart from those in the ‘big six’, with European involvement one of the major advantages for them over Newcastle United.

The colossal advantage for Premier League clubs over the other major European leagues is pointed out in the Deloitte report text below.

Whilst the embarrassingly low commercial revenues we saw under Mike Ashley are set to move onto a whole different level now we have owners at Newcastle United who are trying to build revenues as high as possible to help the club succeed, as compared to the Ashley years of using the club to boost himself and his retail empire’s finances, using NUFC as just one huge advertising billboard for free (minimal money in a very limited number of years).

The impact of COVID-19 is stark with the lack of fans in stadia unsurprisingly causing the lowest matchday revenue in the 25 years of the publication, whilst broadcast revenue is at a record high as a result of deferrals in distributions related to the delayed 2019/20 season (completed in the 2020/21 financial year).

Premier League broadcast rights values are set to pull further away from the other ‘big five’ European leagues from the 2022/23 season with the rollover of existing domestic arrangements on the same terms and the total value of international rights reportedly set to increase by c.30% and exceed the value of domestic rights for the first time.

Therefore, in the 2021/22 season, outside of improved on-pitch performance (particularly in UEFA club competitions) we expect limited growth in clubs’ broadcast revenue. International rights value increases from the 2022/23 season for Premier League clubs may provide a platform for them to climb up the Money League.

The impact of the pandemic on the sponsorship market for Money League clubs is challenging to determine as a result of the timing of agreements between clubs and commercial partners and other varying market dynamics.

As the global economy continues its recovery from the pandemic, we may see commercial revenue of Money League clubs return.