I had this article half written for a while, a reaction to so much of the truly ridiculous stuff written regarding Newcastle United fans and Saudi Arabia.

Yes, of course journalists should be entitled to write about human rights abuses, whether we are talking Saudi Arabia, Qatar, China, Russia etc etc.

However, so much of the coverage hasn’t seen Saudi Arabia as the biggest target to attack, nor the new NUFC owners, or indeed the one who sold the club to the Saudi led consortium. Which is of course the biggest joke, I haven’t seen a single journalist go after Mike Ashley in any significant way for deciding to pocket £305m, 80% of that coming from Saudi Arabia. Considering that he had all the votes, all the shares in Newcastle United, without his agreement there could have been no Saudi ownership of our football club, yet he is never targeted???

Instead, as we all know, it has been a case of so many journalists taking the cowardly route and targeting Newcastle United fans, so many cheap insults aimed at the entire NUFC fanbase. NUFC supporters challenged on what are they going to do about the ownership of their club. Something that we have absolutely no control over, as seen by 13 years of trying to get Mike Ashley out of Newcastle United, after the initial year or so honeymoon period, before we discovered what he was really all about.

Amongst the things I have seen put out by ‘journalists’…

One Saudi Arabia flag in the away end at Chelsea and somehow all 3,000 travelling Newcastle fans responsible for that.

A small number of idiots (allegedly Newcastle fans) on Twitter making shocking comments and that then seemingly equates to fair game for journalists to say this sums up the NUFC fanbase.

A group of Newcastle supporters outside Stamford Bridge, having a laugh and singing ‘We’ve got more money than you’, which is then somehow taken as some serious statement of support for what goes on in Saudi Arabia.

A couple of hundred fans turn up with tea towels on their heads and / or Arab style garb at the first home game after the takeover and this is then reported as though the majority of the crowd had grabbed a tea towel on the way out of the house.

Newcastle fans happy to see the likes of £13m (Newcastle fan) Dan Burn and loan signing Matt Targett arrive in January, after only one player signed in the entire final year and two transfer windows of Mike Ashley’s reign. Yet somehow this is reported as all about NUFC supporters celebrating ‘blood money’ signings.

Anyway, journalists and their hypocrisy.

I wrote these spoof quotes a few weeks ago sparked by what I had seen written about Newcastle United fans….

“Yes I will still be going to any major boxing matches they have in Saudi Arabia and naturally I will be at their Grand Prix.

“However, after I have enjoyed my jollies away, the great hospitality and all expenses taken care of visits paid for by my employers, or at least I think that is who is paying for my trip, mark my words, I will be saying what a disgrace the Saudi Arabia regime is…oh yes.”

“Look, yes I know the Saudis own a major stake in Uber…but well, you know, it is really handy and cheaper than ordering a taxi. So, well, what can you do. Plus this [helping to finance the Saudi regime] isn’t the same as having your football club owned by them, oh no.”

“Yes, me and the family are off to Disney World in Florida this summer, quite handy actually that the World Cup finals have moved this year so we can do that and I get to go to Qatar…

“A half billion Saudi Arabia stake in Walt Disney you say?

“What can a man do? The kids love all the Disney stuff and I’m just a big softy for all those classic characters and films, plus of course we have the Disney channel at home.

“Get real, if we didn’t have that what would our family watch on TV…and we prefer Disney holidays to anywhere else.

“I can’t expect my family to do without, even though we are choosing to help finance the Saudi regime.”

“Short breaks in this country and work trips in the UK?

“Well, it has to be Marriott.

“They just have the most comfy beds.

“Saudi Arabia do have a half billion stake in Marriott and so I am helping to finance their regime but you know what, you can’t beat their sausages at breakfast.”

“Yes, yes, yes, I know social media such as Facebook has seen major investment by the Saudi regime and that I am effectively giving the Saudis money by using it and giving them [Saudis] extra credibility by using this service they part own.

“But how else can I send out hourly messages slagging Newcastle United fans off for backing the Saudi regime, unless I use this part Saudi regime owned service…?”

“Yes the Saudi regime are Manchester United’s longest standing sponsor and yes I know it is now 14 years and counting that this has been the case.

“Yes I know the Saudis pump millions every season into Old Trafford in return for being able to use the Manchester United name / branding to help legitimise their activities / regime.

“However, you have to understand this is absolutely totally different to the shameful way Newcastle United fans are happy for their club’s name / branding to be used to legitimise their activities / regime.

“How is it different you ask? Well, are you thick or something…?

“Who makes the rules up as to what is shameful and what isn’t, you ask?

Then this morning (Thursday 31 March 2022) I saw that a Newcastle United fan had reacted to a Twitter post put up by journalist Miguel Delaney last night.

This is what Miguel had to say… 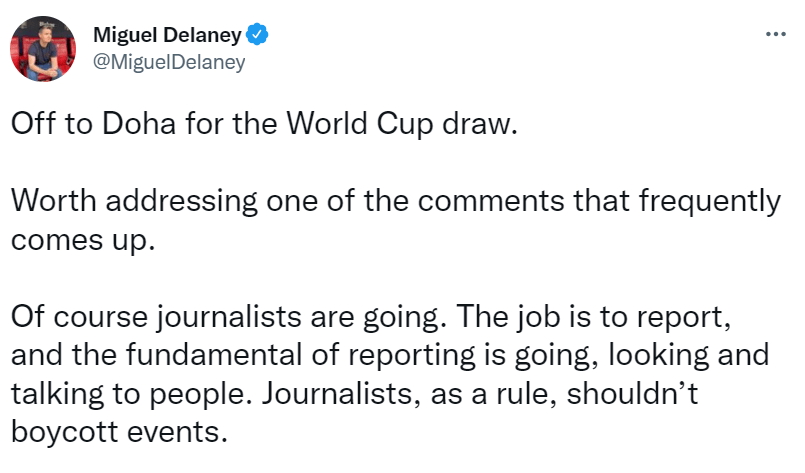 If you weren’t aware of his work, Miguel Delaney has been one of those journalists more than happy to take cheap shots at Newcastle United fans, especially stuff on Twitter to get a reaction.

The reality of course is that so many journalists are happy to call out others but when it comes to taking a stand themselves, something that will impact on them, different rules apply.

By going to Qatar for the draw tomorrow and especially, going to the finals themselves in November / December, journalists are giving credibility to the event and to the regime in Qatar.

If the UK media and indeed those of every other country who are bothered about human rights, all agreed not to attend the draw, not to film it, not to be there in person, if any coverage (from the UK), simply report the basic facts of which teams in which groups. Then that would be a massive stand.

The same of course when the finals are held in Qatar later this year, the same when boxing and formula one are held in Saudi Arabia.

Actions speak louder than words. If journalists want to make a stand, don’t attend these events, don’t go to these countries, boycott them.

For those who say Newcastle United fans are deluded when it comes to how they believe they and their club are covered, compared to certain others…

Here is an interesting example to look at, how it was presented in 2020 when Newcastle United looked set to be taken over.

It wasn’t / isn’t just the headlines either, back when Manchester United (and / or the likes of Liverpool) looked set to be taken over by Saudi Arabia financed moves, what was written by Delaney and many other journalists is so so different to how Newcastle United (and especially NUFC fans!) have been written about.

One of the journalist rules is that as fans we apparently aren’t allowed to say / ask ‘What about…’ because well…they say we can’t.

However, have you ever heard / seen a single journalist challenging Manchester United fans a single time, these past 14 years, about their club taking millions each and every one of those fourteen years from the Saudi Arabia regime?

Have you ever seen a single article completely slating Manchester United for taking money year on year from Saudi Arabia, their longest standing sponsor? Recent years have seen a second Saudi regime sponsor added and yet…nothing.

Or if there have been a host of such articles and moral campaigning from journalists against Manchester United and their 14 years of Saudi Arabia money, the said journalists haven’t done a very good job, as I haven’t ever seen anything and nor has anybody else I know.

Miguel Delaney claims that the ‘fundamental’ of being a journalist is ‘going’ to events, which apparently even includes going in person and giving dodgy countries credibility by your presence. Well surely the ‘fundamental’ of being a football fan is all about going to matches and supporting your team / club, which is all that the overwhelming majority of Newcastle United fans are interested in doing.