Interesting to see the impact on the Premier League relegation odds as we head into the international break.

The FA Cup has impacted this weekend, with quarter-final matches leading to the postponement of a number of Premier League matches.

These included Newcastle United v Crystal Palace that was due to be played on Sunday (20 March), Palace instead hammering Everton yesterday to get into the FA Cup semi-finals with Chelsea now standing between them and the final (Liverpool v Man City in the other semi). 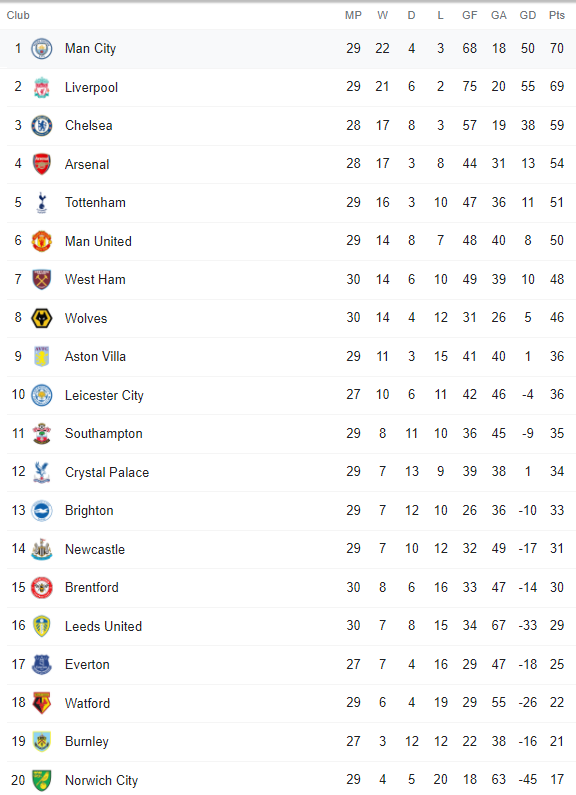 These are now the best Premier League relegation odds for the likely candidates from various bookies after these two Newcastle United defeats:

Norwich (1/100) are seen as absolute certainties for the drop, whilst that flukey Everton (11/4) win (after losing eight of their previous nine) on Thursday night has made a massive difference, instead of outside the relegation places only on goal difference, the blue scousers are now four points above Burnley (1/2) and three points and eight goals better off on GD than Watford (1/8) who have played two matches more than Frank Lampard’s men. Everton though have a tough April, playing away at West Ham and Burnley, before facing Man Utd, Leicester and Liverpool.

Leeds (7/2) did themselves a massive favour with that 2-0 down / 3-2 up turn around at Molineux, before that result they were 7/4 to go down and would have gone lower than that if they had lost, having played more (30) games than anybody else (apart from Brentford now, who have also played 30). One more than Watford who are seven points behind and eight points above Burnley who have three games in hand.

After picking up four points from eleven games, Brentford (9/1) looked to have woken up and found their way to safety with consecutive wins against relegation rivals Norwich and Burnley. A draw at Leicester yesterday would have taken Brentford above Newcastle but defeat keeps them a point behind NUFC having played a game more.

After five wins in six games Newcastle had gone out to 100/1 to be relegated. That came in to 50/1 after losing at Chelsea and then 40/1 after the failure at Everton. Then that dramatic Leeds comeback win at Wolves has helped bring Newcastle’s odds down to 33/1 to be relegated.

No need to panic but after Spurs away at the beginning of April, Newcastle then have three home games (Wolves, Leicester, Crystal Palace) and an away at Norwich. To avoid unnecessary stress they need to sort safety over the course of those games, as the final four matches are against Liverpool, Man City and Arsenal, before Burnley away on the final day.