Supporters recognising his commitment from the very first day, when he and his coaching staff turned up at the training ground before 7am to start the massive job they had taken on.

Now 18 Premier League games and 26 points later, even the most reluctant journalists and pundits have been forced to acknowledge what a transformation he has overseen.

Eddie Howe inheriting a dispirited group of players who had to be worked on hard in training to see if he would get the right reaction, after the mess Steve Bruce had left behind.

So many individuals looking different players now and as for the team, great to see them working so hard as a unit.

One thing that has certainly been achieved is making sure the character of this side has returned, a resilience to bounce back when things go against them.

As this table from the Other14 (who specialise in stats for clubs other than the ‘big six’) shows: 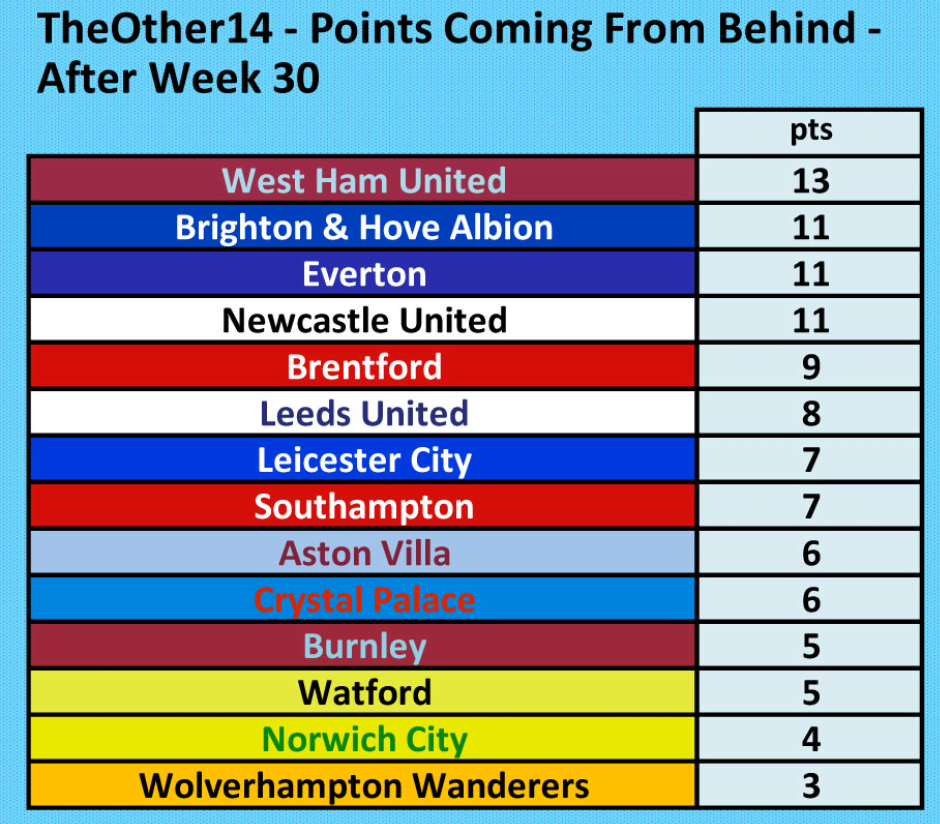 As you can see, of these 14 Premier League clubs outside of the ‘big six’, only West Ham have won more points this season than Newcastle United after having gone behind.

In actual fact, seven of the eleven points NUFC have accumulated after going behind, have been won in the past eight matches. Once Eddie Howe has had his chance to get his ideas ingrained in this team, the results have been striking.

Those seven points that were recently won after going behind, coming from the 3-1 win over Everton, the 1-1 draw at West Ham, plus the 2-1 victory at Southampton.

Newcastle’s place in the relegation battle would look a whole lot different now, if the team had just accepted defeat in these matches after falling behind.

Having come from behind to win twice in these last eight matches under Eddie Howe, to put that into perspective, in Steve Bruce’s final 68 Newcastle United PL matches, the team only managed once to come back and win after having going behind in a Premier League match. That game was the one at Burnley last season, where Newcastle were a goal down and Allan Saint-Maximin came off the bench and single-handedly turned it around in five minutes with a goal and an assist, so I’m not sure how much credit you could give even in that one to Steve Bruce…