It was back in December (2021) when I saw it really building up a head of steam with Allan Saint-Maximin.

At the time I wrote something on The Mag about it, ahead of the Man City home match.

Back then Newcastle United struggling in the middle of a tough run of fixtures.

Yet quite bizarrely, a very significant minority somehow thinking a certain Frenchman was NUFC’s biggest problem…

‘A player that wraps himself in so many bandages to play a game of football doesn’t strike me as a man who is up for a relegation dogfight, would love to think I was wrong but I doubt it.’

Honestly, where do you start? If you think that the biggest problem for Newcastle United is Allan Saint-Maximin this season, then the only problem is you.

Yes, like all other Newcastle players, Allan Saint-Maximin could and should be doing better this season. However, where would we be without him?

Moving forward to the present day and I have been seeing this madness yet again.

It has been twofold this time…

Firstly, I am seeing the same kind of comments as above (the ones back in December 2021), claims that Newcastle United are / would be better off without Allan Saint-Maximin.

Secondly, that Allan Saint-Maximin is supposedly not even injured, can’t be bothered to play, has gone off for a holiday in France because he’d rather do that than play in this relegation fight, that is according to his critics / this lunatic fringe.

On that second point, this idea he lacks commitment to Newcastle United is just crazy. The same with the suggestion that now he is messing the club about and potentially wanting to leave.

Allan Saint-Maximin stayed at Newcastle United under Mike Ashley and Steve Bruce and never tried to jump ship despite the shambles the club was. So…now we are supposed to believe that ASM wants to cause problems and go elsewhere, at the very time we now have a proper manager and ambitious new owners who are aiming to try and make NUFC able to compete both in the Premier League and Europe????

Some of the stuff I have read is unbelievable, Newcastle fans, especially on social media, claiming to know stuff. Quite often it goes along the lines of ‘Heard from quite a few people that Allan Saint-Maximin is not really injured, is messing the owners and Eddie Howe about…’ How embarrassing, the reality is that the people this lot are quoting, are just other losers exactly like them, who pretend they know stuff.

Today (Tuesday 1 March 2022), Allan Saint-Maximin has posted this below on Instagram, saying ‘I’m back’, apparently indicating he is back on Tyneside and able to join in with full training again, set to be available for Brighton at home on Saturday. 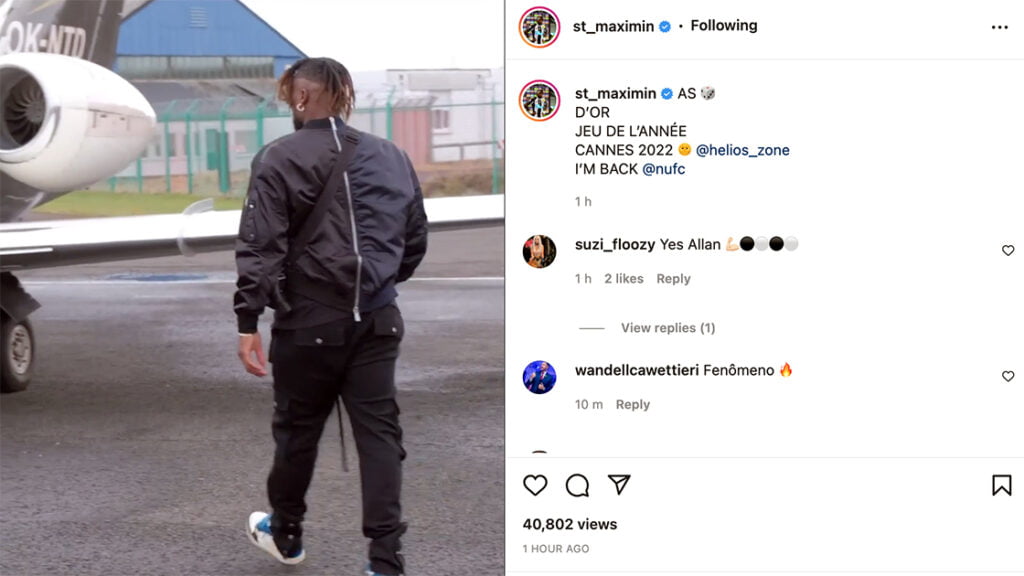 However, I then see certain Newcastle fans saying there should be no way he gets straight back into the team, how well doing without him etc etc.

What planet are you on?

At West Ham, Newcastle put in a solid performance and deserved at least a point. However, they did lack a real cutting edge to complement their general decent play and only managed three efforts on goal, which included Willock’s opportunist goal.

At Brentford, it was a very solid professional performance and Newcastle did well. However, we were playing a totally demoralised team who had picked up a point in their last seven matches, had a fair few key players who were out or not fit enough to start (Toney, Eriksen etc) and who after 11 minutes had to play with 10 men.

Ryan Fraser and Matt Targett combined really well down Newcastle’s left side but had loads of time and space due to the extra man. Still though, they were a real threat as this table from the Other14 (who specialise in stats for clubs other than the ‘big six’) shows: 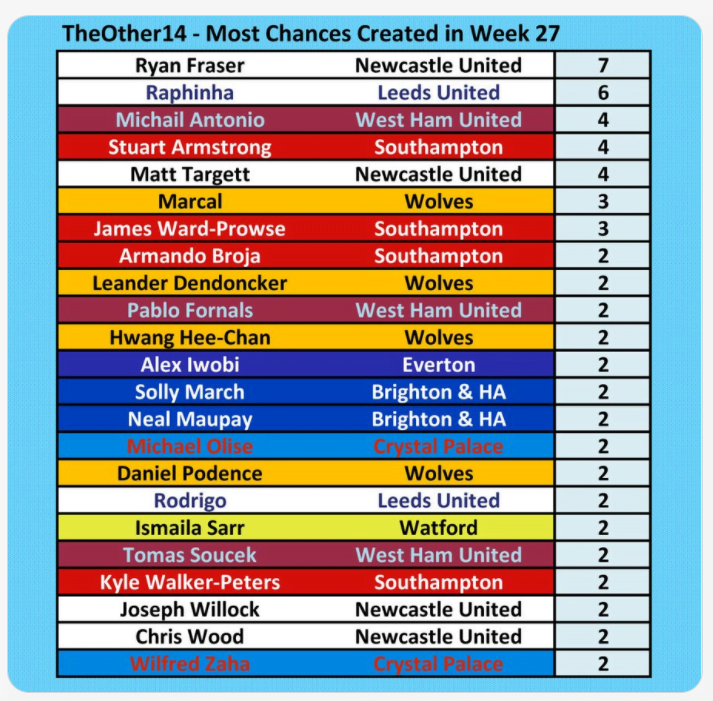 I wouldn’t advocate dropping Ryan Fraser on Saturday, indeed I do think keeping him on the left would be the right way to go. However, would anybody seriously keep Jacob Murphy in the team and leave a fully fit Allan Saint-Maximin on the bench???

The idea we would be better off without Allan Saint-Maximin is just mad.

If playing against West Ham, then every chance he could have made the difference and helped Newcastle win rather than draw.

Whilst against Brentford, look at that table above, whilst Fraser and Targett did well down the left, on the other side Murphy created either one or no chances at all.

Honestly, if Allan Saint-Maximin had been playing against 10 men Brentford, he would have ripped them apart. We scored that really good Fraser / Joelinton goal and then the other one was a good goal as well but came about due to a poor Brentford corner and Schar and Willock on a breakaway. Newcastle only had three efforts on target in that second half (eight in the first), with ASM I think the score would have been four or five.

Look at the Newcastle United players and their direct goal involvement in this 2021/22 Premier League season:

I’m going to use a couple of other updated tables from the excellent ‘Other14‘, 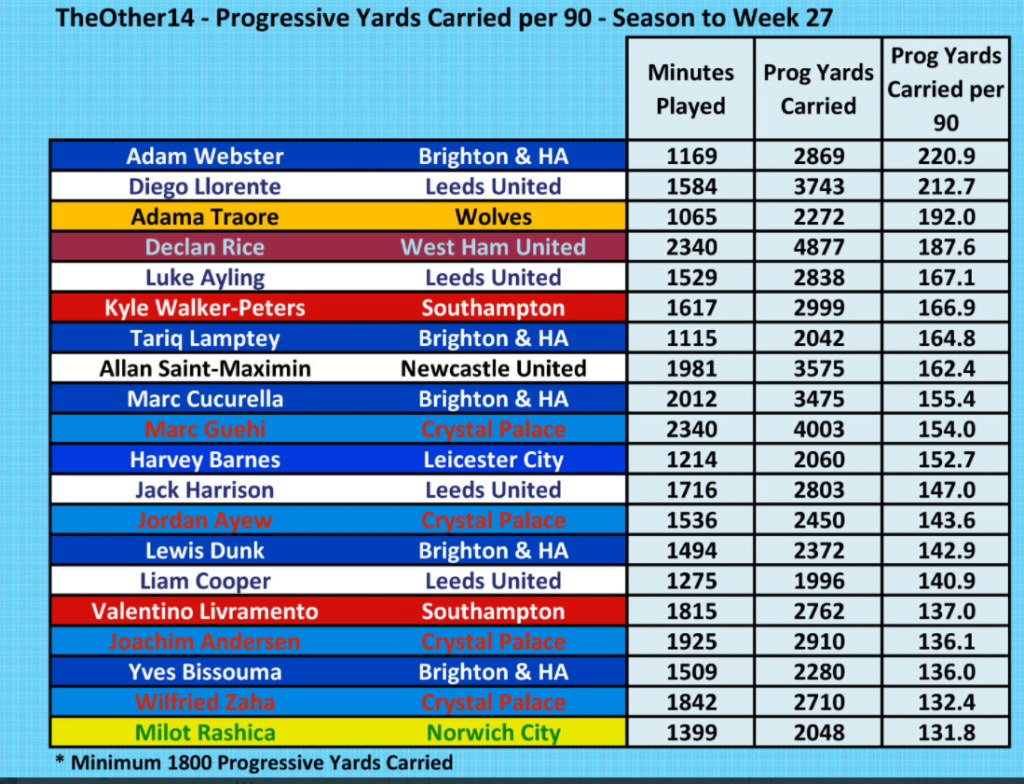 This one as well…. 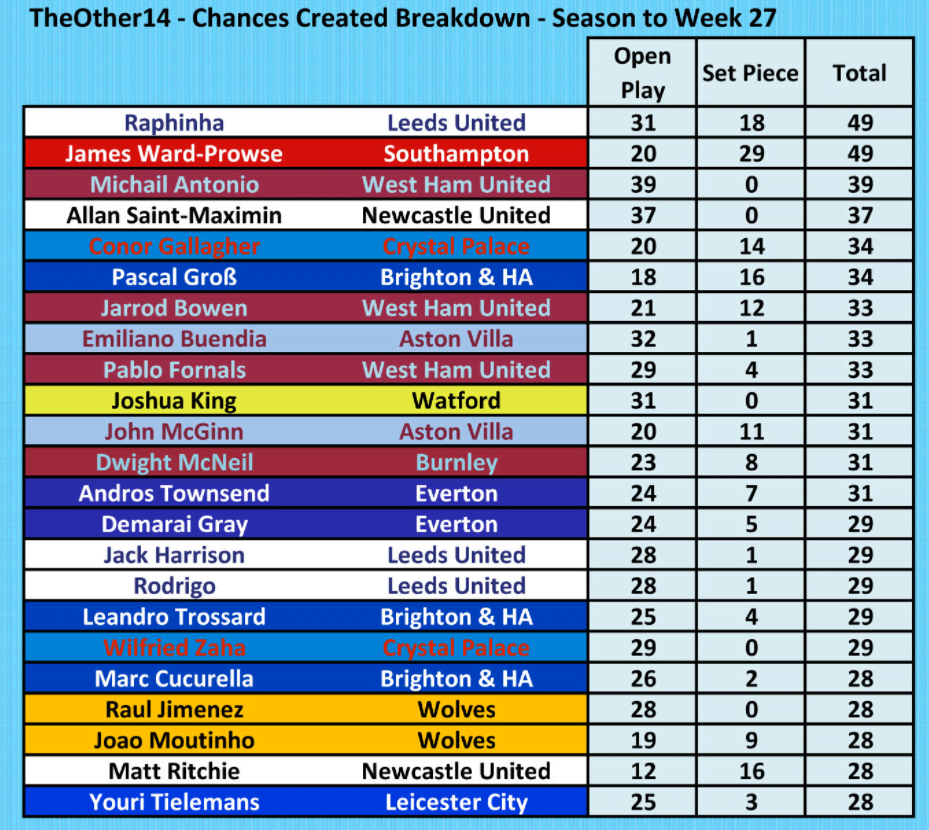 Look at the stats of chances created from open play, only Antonio playing for top six West Ham has created more in open play than Allan Saint-Maximin.

It is great to see other players such as Willock, Joelinton and Fraser looking more of a goal threat BUT we 100% have to have Allan Saint-Maximin in there, as he is Newcastle’s biggest threat and most likely game changer.

Yes he doesn’t do it every game BUT as the stats above show, neither does any other Newcastle player. There have been 27 Newcastle United matches (all competitions) so far this season and apart from Wilson and ASM, not one other NUFC player has been directly involved in more than three goals.

It is also a total myth that Allan Saint-Maximin only plays for himself. He does at times make the wrong decision and shoots instead of passes, takes his man on instead of passing etc etc BUT he has still created far more chances for teammates in open play than any other Newcastle player.

He is a real asset to our football club and I can’t wait to see what Allan Saint-Maximin might be capable of when Newcastle sign better players in upcoming transfer windows, as well as the likes of Bruno G getting fully integrated into the starting eleven. It would be an absolute tragedy if the idiots / trolls got their way and ASM did decide, for whatever reason, to move elsewhere.