How the Premier League relegation fight is now shaping up…

The Premier League relegation fight has now entered the final third of the season.

We are on the finishing straight with the picture now looking a lot clearer, maybe, as to who is set to be battling it out.

With so much having changed in recent weeks when it comes to the Premier League relegation battle, I thought it would be worth looking at the various contenders.

Next three games – Chelsea (Home), Leeds (Away), Brighton (Away)

Let’s be honest, other than a brief blip of form when Dean Smith took over, Norwich have always looked nailed on for relegation.

Can’t score, can’t defend, seemingly no individual brilliance to drag them through games. A miracle would need to happen to save the Canaries.

Next three games – Wolves (Away), Southampton (Away), Liverpool (Away)

Another one that looks pretty nailed on for relegation.

Goals have dried up recently (wondrous bicycle kicks vs Arsenal aside.) Their star players seem to have ran out of form and they look to be another yo-yo team in the making.

Next three games – Brentford (Away), Man City (Home), Norwich (Away)

Now this is where things get interesting.

Burnley could well have been another no-hoper a few weeks ago, but after some great results, they’re only one win away from leapfrogging twp teams and making the dogfight very interesting indeed.

With two away games against teams in the Premier League relegation scrap, if they take a win and a draw from those (very possible), they stand every chance of survival.

I can’t help feeling a little smug with this one – from entitled pundits saying that they are “too big a club to go down”, or that they are too good to be in there, it’s very satisfying to watch them flounder and go to pieces game after game.

Shambolic defending and a completely mismatched midfield, on top of what seems to be a completely destroyed mentality, means that if Everton can’t take a meaningful number of points from some tricky games, they’re in deep trouble.

Another team who are currently an absolute shambles.

At least Leeds had the dual mitigations of a manager that refused to abandon his principles and a hilariously long injury list.

With Jesse Marsch in his first game at least making them look like a team that might know how to organise a defence, plus Bamford back in the squad (with a few other key players not far behind,) Leeds just now have to focus on defending and being better than three other teams in the league.

(This is how the current Premier League table is currently looking on Wednesday, ahead of the Thursday night (10 March) matches) 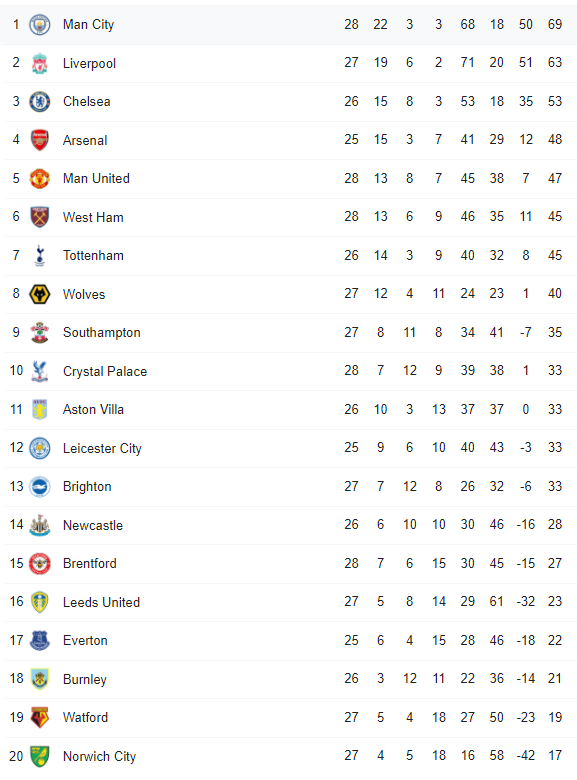 Next three games – Burnley (Home), Leicester (Away), Chelsea (Away)

After finally arresting their atrocious form by beating bottom of the league dwellers Norwich at the weekend, Brentford really have to also win their next game against Burnley. Otherwise they’re right back in the mire with Leeds and Everton.

It remains to be seen if easily beating the worst team in the league was a false result and if they’ll go right back to their shoddy form this weekend.

Next three games – Southampton (Away), Chelsea (Away), Everton (Away)

Hands up who thought Newcastle would be this high up the table in March?

After a resurrection Lazurus would be proud of, Newcastle have the best recent form of any team apart from Liverpool.

Having gone from pretty much nailed on for the Championship under an uncaring owner and inept manager, to a team that is strong, capable and a nightmare to play against.

They certainly still need to be careful but with the current form, I could see six points from the next three games as a distinct possibility.

Depending on how the matches go, we could well see the relegation battle shorten to two teams dead and buried early in April, with possibly /probably another three or so teams fighting for that final Premier League relegation spot.