Keith Hackett has taken a look at controversial incidents during the Chelsea v Newcastle match on Sunday afternoon.

As well as having been a former top Premier League referee, Hackett was also the one-time boss of PGMOL.

Otherwise known as the Professional Game Match Officials Board, basically head of the referees union.

Keith Hackett giving his call on two big incidents in the game at Stamford Bridge.

Kai Havertz getting a yellow card and not a red from referee David Coote when elbowing Dan Burn in the face, then VAR official Jon Brooks not intervening.

Followed by Jacob Murphy having his shirt pulled and tripped from behind by Chelsea defender Trevoh Chalobah inside the box, unbelievably neither Coote nor Brooks seeing this as a penalty despite the Chelsea player not even touching the ball. 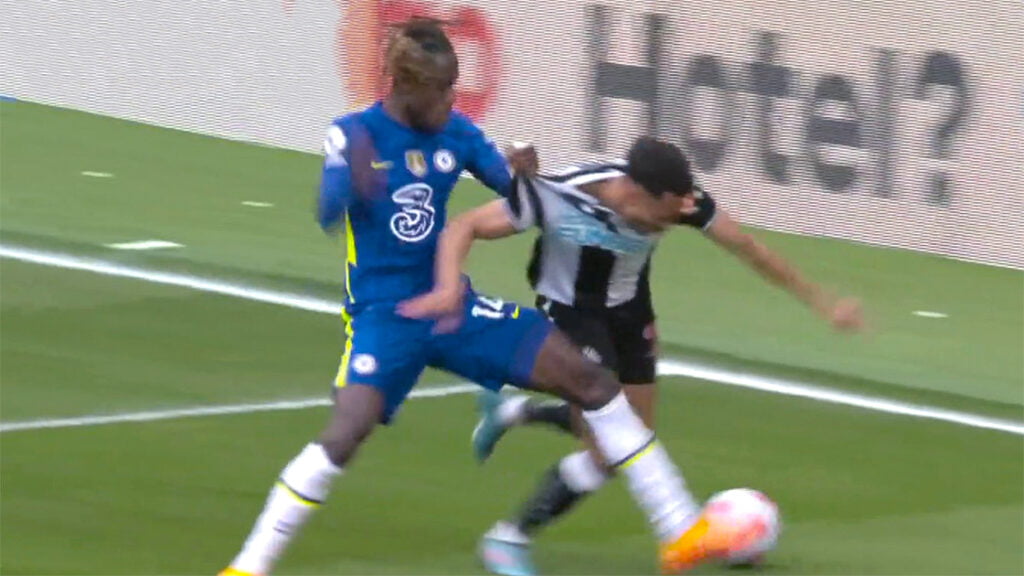 “This is a red card for deliberate use of the elbow, Havertz should have been sent off and I am not surprised by the response by Burn after he had been treated.

“David Coote is having a bit of a mare. Havertz should have received a red card for his high elbow into the face of Newcastle’s Burn.

“It could not be clearer. A first year referee would give that. The guy who scored [with a minute to go] should have been sent off.

“Chelsea’s number 14 [Chalobah] holds the shirt of his opponent then pushes him over with left arm. Penalty kick to Newcastle not awarded.

“We need Nigel Owens [former Rugby Union referee] on this holding offence don’t we. It is so obvious a penalty kick. If I was Eddie Howe I would be asking Mike Riley to explain.

“What an appalling decision – this was holding that prevented forward movement. The push brought him down to the ground. Eddie Howe you have been let down by these two incompetent officials.

“They [referees and VAR officials] are managed by Mike Riley, he needs to be asked this question. It’s a nailed on penalty kick.

“He [VAR official Jon Brooks] needs to go to Specsavers. That is a penalty kick.

“Both [Coote and Brooks] need to be sanctioned, Referee and VAR.”