Interesting to see the impact on the Premier League relegation odds after the weekend’s results.

Newcastle United getting a deserved win at the Brentford Community Stadium, totally dominant after the red card, with 26 shots and 11 of them on target, whilst the home side had their one and only effort on target in added time.

The bookies reacting following Newcastle making it 13 points picked up from the last possible 15.

Some significant moves in the Premier League relegation odds after these eight games this weekend (only eight PL fixtures due to League Cup final): 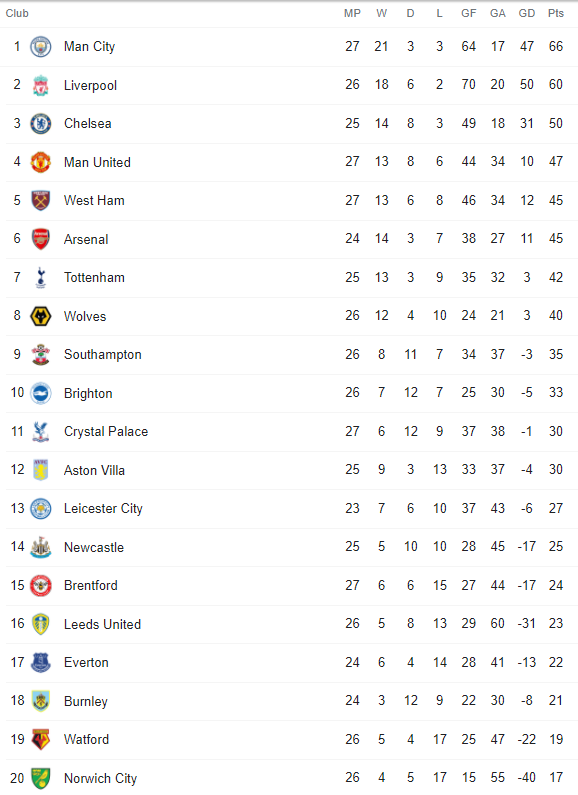 These are now the Premier League relegation odds for the likely candidates from various bookies after the weekend’s matches:

Despite a credible draw at Old Trafford at the weekend, Watford (1/7) along with Norwich 1/16  seen as complete no hopers.

Watford six points adrift of Newcastle and Norwich eight points behind NUFC, both having played a game more than Eddie Howe’s side.

Whilst Burnley returned to their usual draw form when picking up a point at Palace, still a point more though than the three clubs managed who started the weekend immediately above Newcastle.

Only three points now separating Burnley (6/4), Leeds (6/4), Brentford (2/1) and Everton (4/1), the four clubs who the bookies now see as most likely to be fighting it out for the third relegation spot.

Newcastle United (9/1) rising to easily their highest (14th) placing in the Premier League this season, as Eddie Howe continues to do a remarkable job in repairing the damage left behind by Mike Ashley and Steve Bruce.

Very recently, Newcastle were still odds-on to go down, so pretty amazing that now seen as only a one in ten (9/1) chance of going down.

Nobody pretends that it is job done already BUT Eddie Howe and his players, with the help of the new Newcastle United owners, have given themselves a great platform to now build on and get to that safety line.

A win against a badly out of form Brighton next Saturday, would see Newcastle only five points behind the Seagulls and with a game in hand. Considering how many plaudits have come Graham Potter’s way for Brighton’s efforts this season, it would be yet another marker pointing towards just how well the NUFC Head Coach is doing, having picked up 20 points in 14 Premier League matches, compared to the five points in 11 PL games before he arrived.