The Premier League relegation battle is shaping up to very ‘interesting’ as we take stock of how things look after Wednesday night’s action.

It is inevitable that any number of twists and turns will happen as the fight intensifies.

Whilst Newcastle United have given themselves a great chance of reaching safety with Eddie Howe, due to 12 points from the latest six Premier League matches, it was maybe inevitable that at least one other club at the bottom would also rouse themselves.

Last night, Burnley did what they do best.

It seems like every season, no matter how badly they have been doing, Sean Dyche gets his team to hit a hot run of form than ensures safety for another season. That run of form normally built on a strong defence…

On Saturday, Burnley went to Brighton and won 3-0, they might have only had 31% possession but they restricted Graham Potter’s side to only one shot on target.

Looking back, it isn’t really a massive surprise that Burnley are now winning matches. Before these two wins, their last 13 PL games had seen them only lose four, but win only one, with a massive eight draws. Four of those draws ended 0-0, suggesting that if Burnley could just find the odd goal they would start winning…

Indeed, any season when they have looked in trouble these past five years, Burnley have found a run of form to get them out of trouble. As well as two very impressive seasons where they accumulated 54 points in each, the other three have seen 39 points and 40 points twice. They are nothing if not consistent and now look to have a real chance of getting out of trouble.

In contrast, we had two other matches last night that impacted on the Premier League relegation fight in a far more positive way for Newcastle United.

Crystal Palace winning 4-1 at Watford and Liverpool hammering Leeds 6-0 at Anfield. Leaving the situation looking like this… 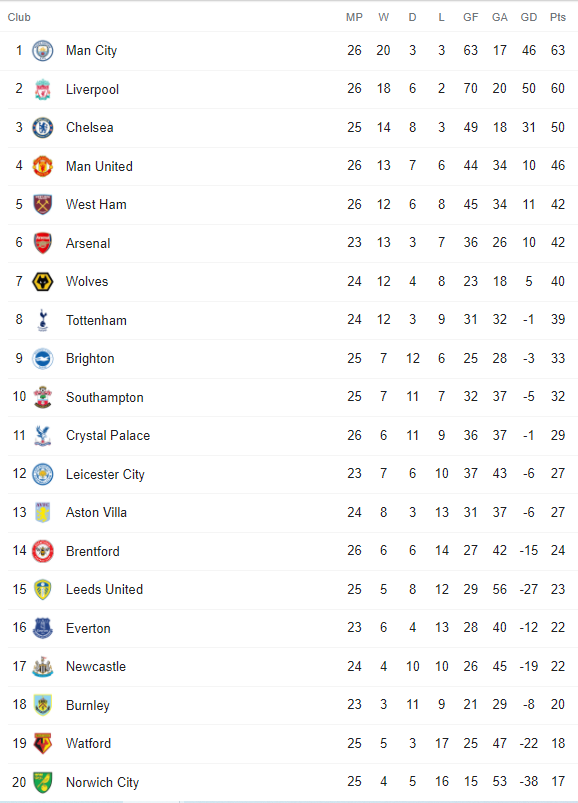 Leeds could very well be in freefall, Newcastle’s win at Elland Road beginning a sequence of five matches where Bielsa’s side have picked up only one point and conceded a massive 17 goals in five matches.

As for Watford, they were given hope when beating a Villa side at the weekend who are in a bit of freefall themselves, but the Hornets are on a run of 13 games now where they have lost 10 of them.

The Premier League relegation fight is set to further intensify in the next week and a half.

In 11 days time, by the close of Monday 7 March, the following Premier League matches are scheduled to have taken place:

Whilst Spurs lost last night, I think they may well find Leeds and Everton a lot more to their liking, considering the number of goals that pair are conceding.

Looking at the fixtures above in these next 11 days, I find it very likely that Watford, Everton and Leeds may pick up zero points between them, whereas you can’t help but think Burnley are now building momentum and set to pick up more in their trio of games.

This is a schedule which I think makes it absolutely imperative that Newcastle pick up four or more points in the next two games, away at Brentford and home to Brighton.

Particularly due to the fact that if Palace win at home to Championship Stoke in the FA Cup fifth round, which they are expected to do, the Newcastle v Palace match would then be postponed until April at the earliest. Which then means, after Brentford and Brighton, Newcastle would then have four away games in a row – Southampton, Chelsea, Everton and Tottenham.

That is some shocking form, in comparison, Eddie Howe has picked up 12 points from his last possible 18, winning three and drawing three of his last six games.

The more and more you look at it, if Newcastle United can go and win at Brentford, that would / could prove massive in this Premier League relegation battle.