The most important thing when it comes to the Premier League table, is obviously for Newcastle United to keep picking up points themselves.

Three victories in a row against Leeds, Everton and Aston Villa ensuring that Newcastle’s fate was back in their own hands.

A tough trip to the London Stadium looked to have been made significantly tougher, when we discovered that Allan Saint-Maximin had been added to the missing list alongside Kieran Trippier and Javier Manquillo after the home win over Villa last Saturday.  That on top of the likes of the already missing Callum Wilson.

As it happened, an excellent first half display and decent performance in the second half, left Newcastle United feeling that they missed out on a great chance of all three points.

The one moment of poor defending seeing West Ham take the lead through Dawson, only for Willock to deservedly put Newcastle level just before the break.

Kicking off first on Saturday, would have meant an away win leaving Newcastle United seven points clear of the relegation zone. Instead, it was a five points gap before an ‘interesting’ set of games and results followed in the 3pm Saturday matches…

That leaves the Premier League table looking like this after the 3pm Saturday matches: 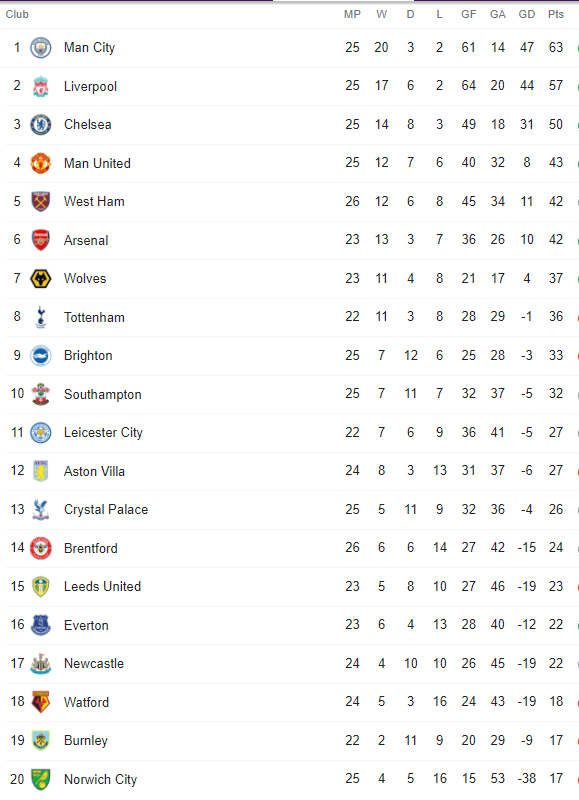 As you can see, obviously a fourth win in a row for Newcastle United would have been huge. As it would have taken NUFC into fifteenth place, only behind Brentford on goal difference with United having two games in hand.

I always felt that we couldn’t simply count on the other three at the bottom to continue to be so poor, as was shown today with wins for both Watford and Burnley. Though it could have been even worse as Liverpool trailed Norwich with 26 minutes to go.

The fact that Everton and Brentford both lost and continued some pretty horrific form over the course of months, suggests to me that there is no easy route out of trouble for either of them. The same potentially with Leeds who play Man Utd on Sunday.

The point today proving clearly so valuable for Newcastle, as it means they maintain a gap of four points to third bottom, plus of course a point gained on the likes of Everton and Brentford above, as well as hopefully Leeds.

Next Saturday’s match at Brentford looks a big one for Eddie Howe and his team, especially if others at the bottom are going to be able to build on results today.

Premier League matches still to be played this weekend: