A new report has been published looking at net transfer spending.

The report comes from the CIES Football Observatory and ranks current clubs in the big-5 European leagues, which are those in England, Spain, France, Germany and Italy.

So basically, which clubs have the biggest net transfer spending, once you deduct cash generated via sales, off what is spent on transfers.

As the CIES Football Observatory point out:

‘Manchester United tops the table with a negative balance of more than one billion euro, ahead of Manchester City and Paris St-Germain. Fourteen English clubs are in the top 20 of clubs with the most negative net transfer spending.

Gathered with the greatest care through the cross-checking of all possible sources, whether official or unofficial, the data includes eventual add-on fees included in the deals, regardless of their actual payment. Within the limits of available information, incomes deriving from sell-on fees are also taken into account.’ 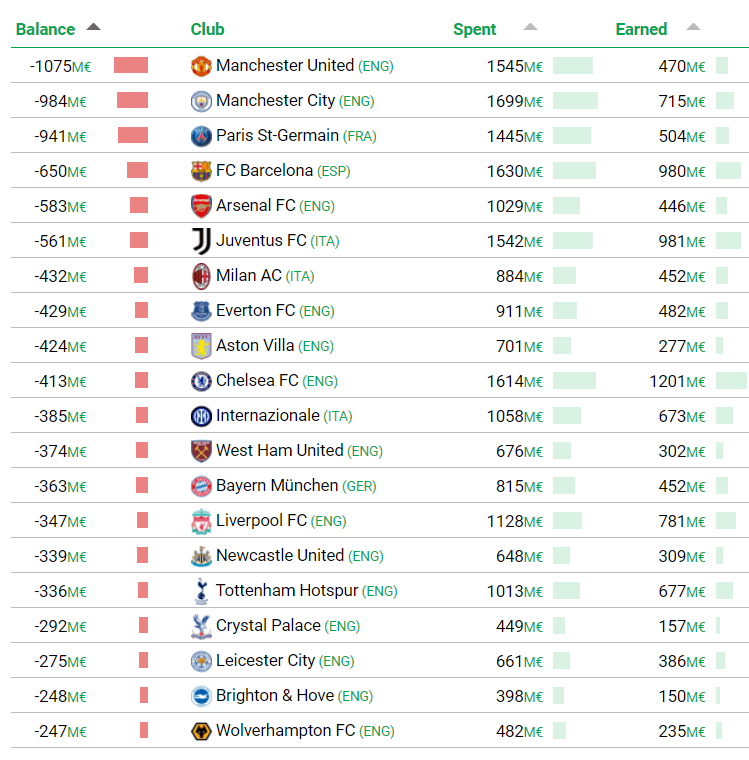 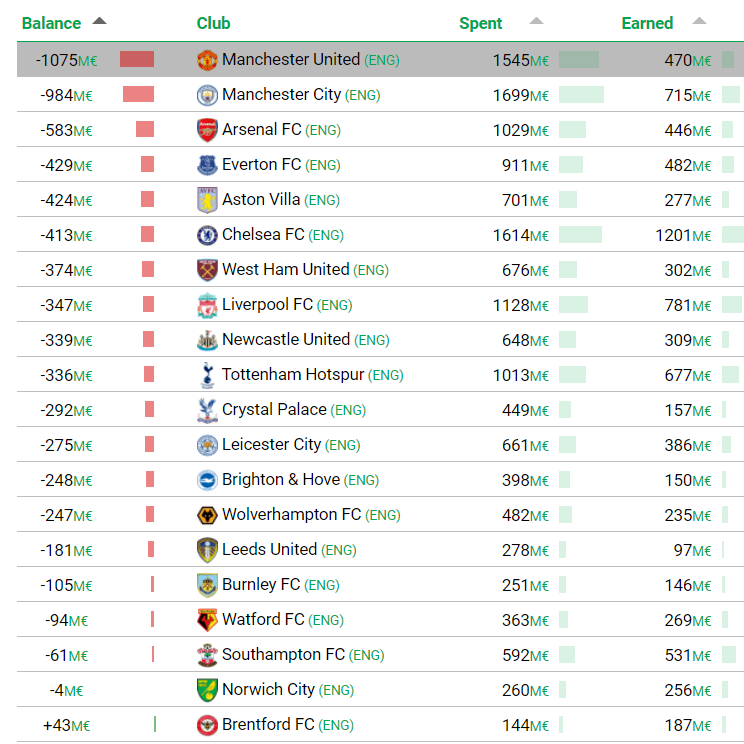 As you can see, the bottom line is that whilst you have rare obvious exceptions, the Premier League is all powerful when it comes to money, this of course massively due to the money generated for all PL clubs via the TV deals both for the UK and around the globe.

At first glance, you might also think, well…Mike Ashley doesn’t come out of this too badly, considering he was in charge for 19 of the last 20 transfer windows.

However…once you take out this 20th and latest transfer window under the new owners, it looks a very different story. The very lowest figures you would imagine used from this latest Newcastle United window would be a net transfer spend of £85m, made up of widely reported guaranteed fees for Guimaraes (£35m), Burn (£13m), Wood (£25m) and Trippier (£12m). This doesn’t include any agree potential add-ons, whilst there were no players sold in January, so nothing to be deducted from that £85m minimum figure when it comes to net transfer spend last month.

At the current exchange rate, £85m is approximately 100m euros.

Newcastle United end up with a new net transfer spend total for this last decade of 239m euros and not 339m euros, that equates to around 12.6m euros (approx £10.6m) per window on average net transfer spend under Mike Ashley in his last 19 windows.

It would also mean Newcastle United dropping from 15th to 20th amongst the European clubs table above.

Whilst a fall from 9th to 14th in the list of Premier League clubs. The bottom line is that the same five PL clubs would overtake Newcastle in both lists.

Where that leaves us under Mike Ashley, is that we are only(***) then left above the clubs who have spent so much of the past decade outside the Premier League.

Newcastle United have spent one of these last ten seasons outside the Premier League but for Brentford it is nine out of ten, Norwich it is five, Leeds it is eight, Burnley it is three and Watford four.

Indeed, once you have this last NUFC new owners transfer window knocked off the totals, you have Brighton (five of last ten seasons outside PL), Wolves (it is six) and Villa (three) all above Newcastle United when it comes to net transfer spend this past decade.

The one exception is Southampton(***), who are still below Newcastle United when it comes to net transfer spend this last decade when compared to Mike Ashley’s 19 windows.

However…they have generated some astonishing transfer fees by clever buying and developing players, meaning that they have still spent more on players these past ten years than Mike Ashley allowed, the Saints with 592m euros spent compared to Newcastle’s 548m euros under Ashley (from summer 2012 onwards).