Bruno Guimaraes called into action by Brazil with predictable results

All eyes were on Bruno Guimaraes last night(***).

Bruno Guimaraes the centre-piece of an amazing transfer window, one of five players recruited at a total cost exceeding £100m, if / when all add-ons are activated.

It was Brazil v Paraguay last night(***12.30am this Wednesday morning in UK time) and Newcastle fans relieved when Bruno Guimaraes was left out of the starting line-up, hopefully helping to ensure he will be fully fit and injury-free for his date at St James Park in (now) six days time.

With Brazil having already qualified for Qatar after 12 wins and two draws in their 14 group qualifying matches so far, they found themselves 2-0 up against Paraguay with goals from Raphina (28 mins) and Coutinho (62 mins).

Then with 17 minutes to go, Bruno Guimaraes replaced Coutinho.

This is how Mozo Football summed up the Newcastle midfielder’s impact when coming on:

Future is bright for Brazil’

Antony made it 3-0 for Brazil on 86 minutes and then two minutes later it was Rodrygo completing the scoring, making it 4-0 with an assist from the Newcastle midfielder.

A perfect cameo that appears to perfectly set up Bruno Guimaraes for the Newcastle United challenge ahead, the former Lyon star clearly in the best possible frame of mind as he is now set to arrive on Tyneside.

After the match, Bruno Guimaraes declaring:

I waited, worked and fought hard for it. 24 years waiting for this moment.

This now leaves the South American World Cup qualifying table looking like this on Wednesday: 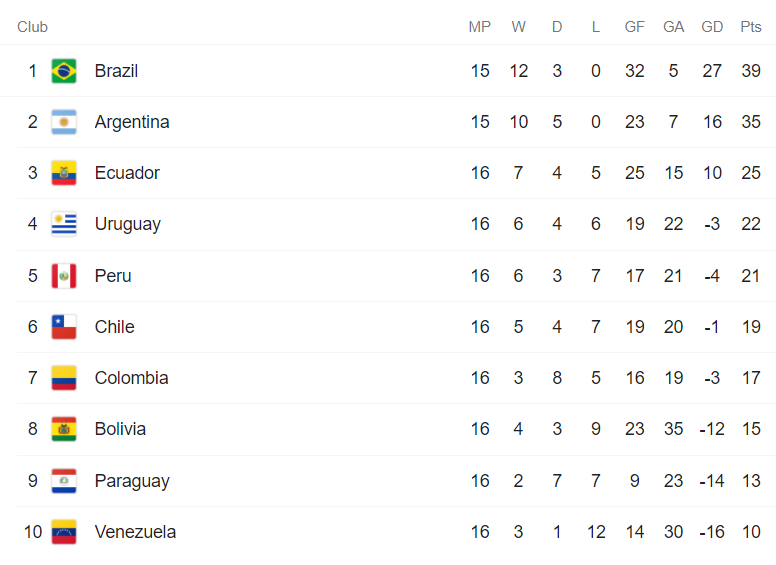 As you can see, Brazil having long ago qualified, with four automatically going to Qatar and the fifth placed country going into a qualifier. Only a case now of making sure they finish top of the group ahead of Argentina.

A very different story for Miguel Almiron and Paraguay.

Almiron played the full game in defeat to Brazil but this was the match when it became mathematically certain they aren’t going to the World Cup finals.

Having started the group in promising fashion, unbeaten with seven points from five games, the next eleven have seen only one win and another six points with seven defeats and three draws.

Now their only ambition is not to finish rock bottom below Venezuela. Newcastle are set to face Everton on Tuesday with Salomon Rondon making a return to St James Park, the former NUFC striker and his international teammates lost 4-1 to Uruguay last night, but a few days earlier Rondon got a hat-trick in a 4-1 victory over Bolivia.

As for Newcastle United, safe journey home for both Miguel Almiron and Bruno Guimaraes, the real fight for Premier League survival starts now.