I wanted to highlight the clear bias and uneven reporting by the UK football media with regard to Steve Bruce and Rafa Benitez.

When Steve Bruce was appointed as the Newcastle United boss, we were told the only reason we didn’t want him here was because he’d managed Sunderland.

It wasn’t, it was because he was sh.t at his job and was a massive downgrade on his predecessor, a certain Mr Rafael Benitez. When he (Bruce) was sacked, it was because he’d exhausted all excuses, he was a tried and tested failure at every other club he’d managed…

Yet we were expected to welcome his appointment with jubilation, despite the fact his tenure at Newcastle United did nothing to buck the mediocrity trend, in fact, all it did was add to his awful record.

Yet, despite his 29% win rate, bizarre nonsensical pressers, player unrest, training ground bust-ups, non-training and “histrionics” comments about our fanbase, there was hysterical outrage within the media and amongst fans of other clubs when he was relieved of his duties.

A large number of his games in charge were within the covid era, without fans present, he never really suffered the same fan unrest as the likes of Pardew or McClaren did, yet if you weren’t a fan of Newcastle United and took your information on the situation purely from the usual suspects TalkSport and Sky Sports, you’d think he’d been chased out of the city with pitchforks and burning torches.

When Rafa Benitez was appointed Everton manager, a large percentage of their fanbase were disgusted with the appointment and made no secret of the fact that because he’d managed (successfully) their bitter rivals Liverpool, there was no way they were going to accept him. Granted, his results at Everton have been poor by his standards, but he’s been hamstrung by injuries to key players like DCL, Mina and Richarlison for long periods of this season.

Over spending in previous seasons by highly regarded managers like Carlo Ancelloti, had meant he’d have to make bargain basement signings like Townsend, Gray and Rondon. Already on a hiding to nothing before he’d even started.

Rafa was sacked as Everton manager on Sunday, after a 2-1 loss to Norwich on Saturday, in a game that saw the Everton fans holding up a banner at Carrow Road reading “Rafa Benitez Get Out Of Our Club”. 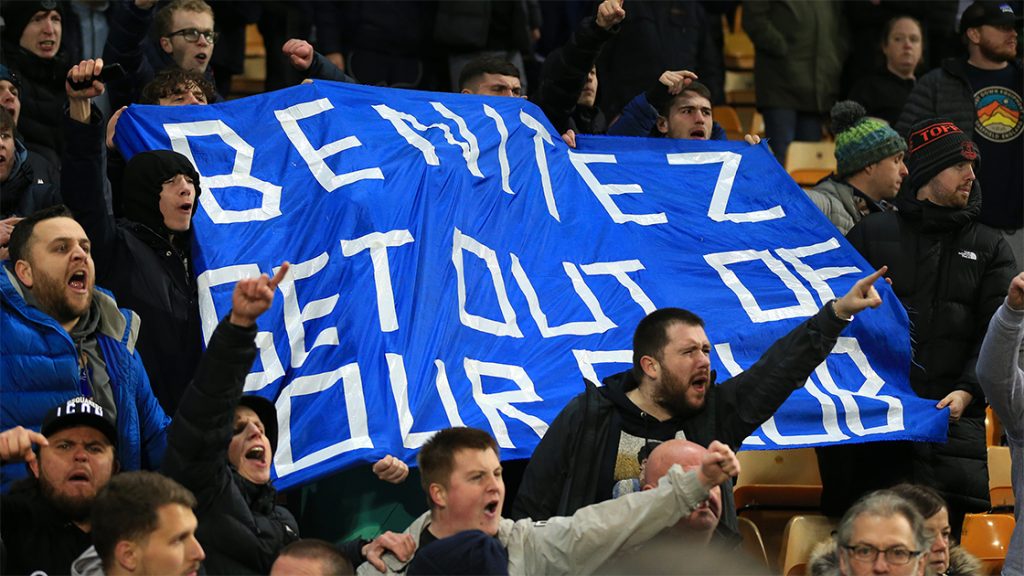 No such banners were ever on display at St James Park or any away grounds for Steve Bruce, nor were there ever any cabbages thrown at him like at Villa Park, or coins thrown at him, nor death threat letters sent to him the way they did at that little third division club down the road.

His son Alex, invited and encouraged fury from our fan base by way of a series of ridiculously childish online insults and radio interviews for top Bruce fan club radio station TalkSport, and incidentally, continues to do so. And that is where Steve Bruce’s “horrific treatment” started and ended, nothing more, nothing less than a few boos.

Yet there’s been no fury, no outpouring of disgust for the way a manager of Benitez’ stature / pedigree has been treat. No faux outrage at a “nice bloke” being hounded out. No series of interviews with failed / poor ex footballers like Gobby Ag or Jamie O’Hara and I don’t expect any.

This thread isn’t aimed at triggering Everton fans, not at all, although no doubt some will take it as a dig. I can understand how Rafa being so successful at your main rivals and being a symbol of Liverpool’s superiority in your city would be hard to accept as the man to then get behind at your club, 100% I can.

All I’m doing is highlighting how our fanbase have been vilified so relentlessly by the media for wanting a better manager than Steve Bruce, wanting better than mediocre for our club, when we’d seen the potential uncovered by Rafa, only to be hamstrung by our Ashley, who incidentally we were also told by the same media outlets we should accept and be happy with.

Yet it’s perfectly fine for the Everton fanbase to turn their back on a Champions League winning, successful manager before a ball was even kicked and nothing will be mentioned or dragged up about him on a human level and how he must have felt, that special treatment was reserved for Newcastle United fans and Steve “Nice Guy” Bruce.