Rio Ferdinand has been analysing the Premier League relegation battle.

The former Man Utd and Leeds player thinks that it comes down to three from five.

Rio Ferdinand believing the bottom five have been ‘cut adrift’ ahead of this break.

This is how the Premier League table looks now, ahead of the resumption of league matches in February: 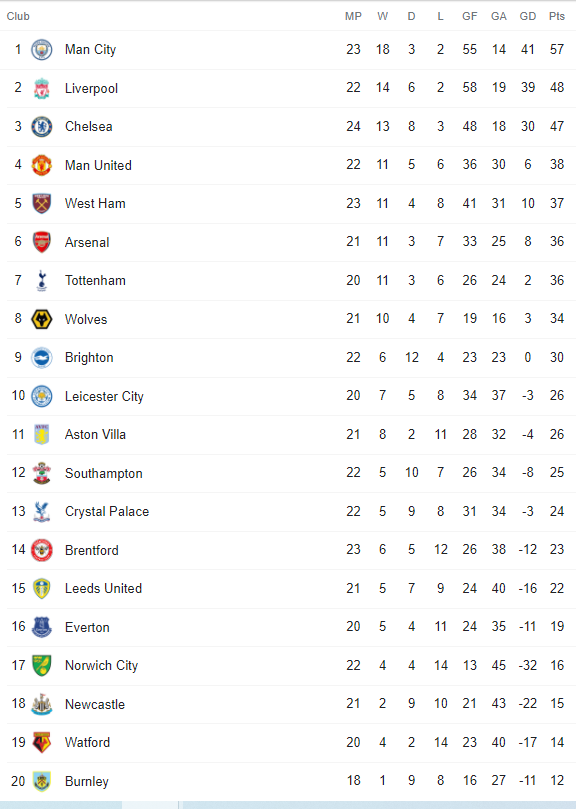 Rio Ferdinand obviously referring to Burnley, Watford, Newcastle United, Norwich and Everton, as the five in danger, with Leeds three points clear of fifth bottom and currently seven points clear of Newcastle and the relegation spots.

When Premier League football returns, there are some key matches that could significantly change things at the bottom.

For Rio Ferdinand, he has picked Burnley, Watford and Norwich as the three who will be relegated.

Explaining his reasoning (see below), Ferdinand thinks Newcastle United will stay up with the help of one or two more signings in this transfer window and then ‘go big in the summer’ in the transfer market.

For once, I find myself wanting to agree with Rio Ferdinand…

“I think that Newcastle will stay up and then do big business in the summer.

“I think they will go big in the summer.

“They seem to be doing it [in the transfer market] more meticulous and strategic, less gung ho, than other teams who have had money, straight away.

“Before Norwich went on this run [beating Everton and Watford] they are on at the moment, I had them as certainties to go down.

“They have come out of nowhere but this break has killed their momentum.

“I think the bottom five are cut adrift.

“I am going with Burnley, Watford and I think Norwich will get dragged back into it too.

“If this break hadn’t of happened I would give them [Norwich] a chance but I think the break will ruin their momentum.

“I think Newcastle will get out of it.

“I think they will add one or two players who will make an impact.”