Premier League relegation – 96th minute winner, next month crucial and game where want nothing to happen

For the Premier League relegation candidates, things are now hotting up.

Watching on from a Newcastle United perspective, I think the luck has turned our way very recently.

Which may seem a bit strange, for somebody who supports a team that has won only one of nineteen Premier League games so far and drew 1-1 with Man Utd in the most recent match despite clearly NUFC deserving all three points.

However…since Newcastle played that last game on 27 December, I don’t think we can have any complaints.

Norwich and Burnley stuffed, whilst Watford took the lead against West Ham only to then get hammered as well, before then losing to a 96th minute goal against Tottenham yesterday. A goal that I have a feeling may well be crucial in this Premier League relegation struggle, as the last thing you want is your rivals getting any kind of encouragement, so what better than a crushing injury time losing goal.

Ahead of Sunday’s matches it leaves the Premier League table looking like this: 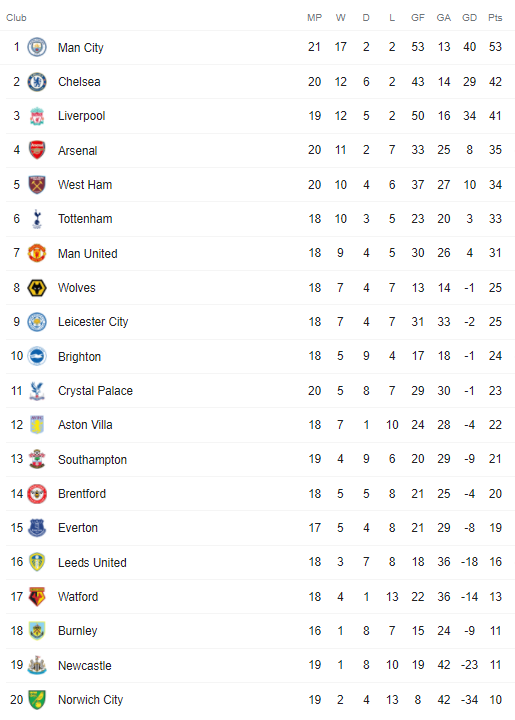 There is no 100% great outcome possible in the Leeds v Burnley match on Sunday (2pm kick-off) BUT of the three options, a goalless draw with absolutely nothing happening, if by far the least worst of that trio of possibilities.

A draw that would nicely set up this Premier League relegation battle for the next month or so…whilst Everton losing at home to Brighton today would also keep Rafa and his team in touch.

After today, this is how the next month or so looks in terms of PL fixtures for those at the bottom:

In these next three or four matches after today, for the clubs at the bottom, I think it is on a knife edge.

If Newcastle United could pull off a couple of wins and a draw for example, along with results elsewhere going in our favour, things could look so much better after that home game against Everton.

However, things could just as easily go the other way, if everything went wrong from an NUFC perspective.

Ahead of that Watford match, we desperately need some new signings and getting players off the injured list, plus others free of Covid.

There is then the added wildcard of not knowing yet when the postponed matches at Everton and Southampton are to be fitted in, potentially at least one I think fitted in the time period above.