Allan Saint-Maximin has yet again been a major talking point.

The French winger sparking much debate after Saturday’s match against Cambridge.

Bizarrely, a sizeable minority of Newcastle fans somehow thinking he was the biggest problem in the defeat.

To me, the reality of the situation appears to be for me…

That for these fans / critics, because Allan Saint-Maximin carries so much of this NUFC team’s burden to create chances / make something happen, that when the team lose and struggle to create chances, then it must be his fault!

A table has been published by ‘The Other 14’ (who specialise on stats/tables etc on the 14 clubs who aren’t the ‘Big Six’) which shows Premier League players who have contributed most in terms of ‘carries into the penalty area’ so far this season: 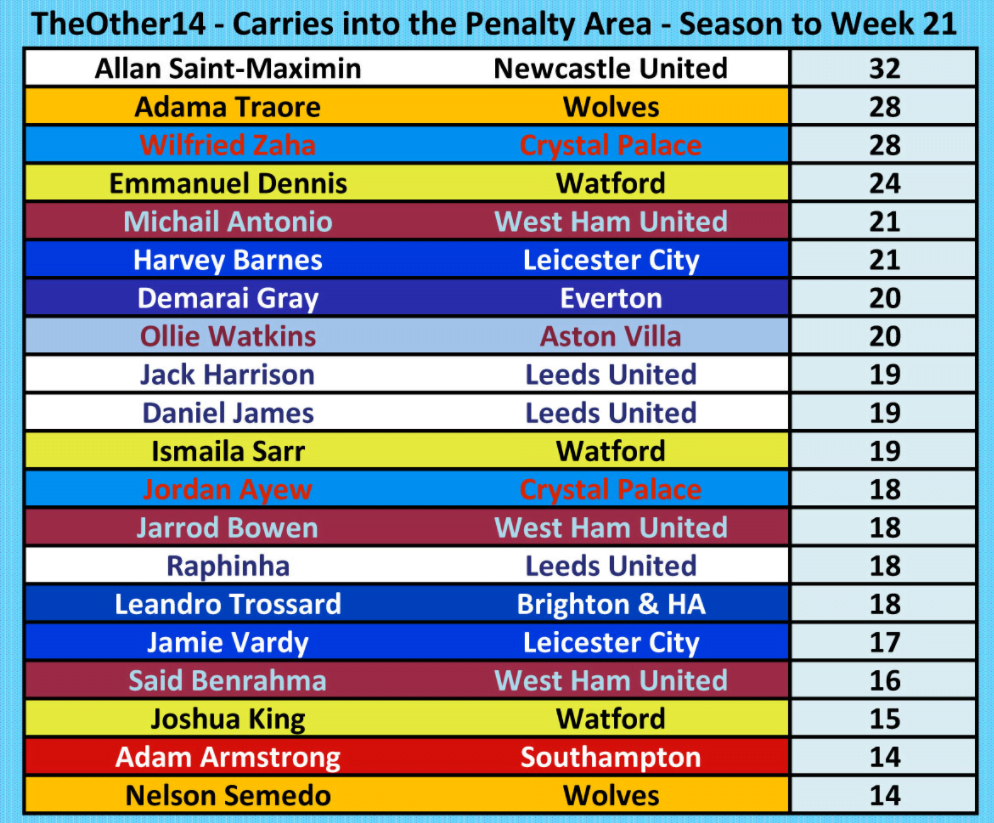 As you can see, Allan Saint-Maximin at the very top of this particular table, running into the opposition penalty area more times than any other player of the ‘other 14’ clubs. ASM doing this 32 times and yet not a single other NUFC player making it into the table, even though 14 runs into the box would have got you included.

On Saturday in the FA Cup, Allan Saint-Maximin was doing this as well. One time really stands out for me, I know Joelinton has done better in other areas recently but his shooting is still woeful. In the first half against Cambridge, ASM surged towards and into the penalty area, then laid it off to Joelinton some 15 yards out with a great shooting chance and then instead of pulling the trigger as a decent / natural striker would do, he instead appeared to get into two minds as to what to do and ended up falling / slipping to the ground instead of scoring. Very very similar to the final stages of the Brentford match, when at 3-3 Allan Saint-Maximin ran from inside his own half, got into the box, laid it off for Joelinton to score the winner, only for the Brazilian to not shoot – even though only the keeper to beat, instead, checking inside and…falling over. This isn’t an anti-Joelinton rant because he is much improved overall BUT it does sum up what the problem is for ASM with those around him!

In almost every stat, Allan Saint-Maximin is a positive compared to everyone else at Newcastle United, whether carrying the ball into the box, positive yards with the ball up the pitch, or whatever, whilst he has been directly involved in seven goals (scoring four, three assists) in 18 Premier League starts this season. Callum Wilson (with six) is the only other player to score more than one goal this season!

Yes, Allan Saint-Maximin can be frustrating BUT I don’t think ‘frustrating’ comes close to describing the rest of this Newcastle United squad (Wilson excluded) when it comes to goalscoring and creativity…and indeed overall quality in almost every single case.