An exclusive on Wednesday morning, has revealed that Jesse Lingard could be on his way to Newcastle United.

The Manchester Evening News are the ones who have ran the exclusive, saying that Newcastle United have put forward a proposal to sign the 29 year old midfielder.

The newspaper saying that their information is that Manchester United and Jesse Lingard are now considering the deal.

They report that both club and player had been resigned to the player seeing out the remainder of the six months left on his Man Utd deal, not playing at Old Trafford, rather than moving on to get football elsewhere.

However, the Newcastle United approach potentially changing all that.

Saturday summed up recent times for Jesse Lingard at Man Utd, brought on with one minute to go in the 2-2 draw with Aston Villa.

Jesse Lingard has played only 88 minutes of Premier League football this season for Man Utd but has still scored two goals, including one in the 4-1 winner against Newcastle United in September.

Whilst the last Premier League start for Manchester United was over 24 months ago, so clearly Jesse Lingard needs to get away from Old Trafford.

He is desperate to be included in the England World Cup squad for Qatar in ten months time and if not getting regular Premier League football, his chances are surely set to fade. Despite the lack of club football, Jesse Lingard actually has two goals and two assists for England this season, last playing in October 2021 for the national side.

This would be the last chance for Man Utd to generate money from Jesse Lingard via a loan fee from Newcastle United (or another club) this month, plus save on his £100,000 a week wages.

However, matters further complicated by the Old Trafford club having no intention of loaning him to a rival club for the remainder of the season.

As you can see from this up to date Premier League table on 19 January 2022, Newcastle United are arguably more of a competitor for Man Utd than Man City are, the leaders 24 points ahead of Ralf Rangnick’s team, who in turn are only 20 points ahead of Newcastle. 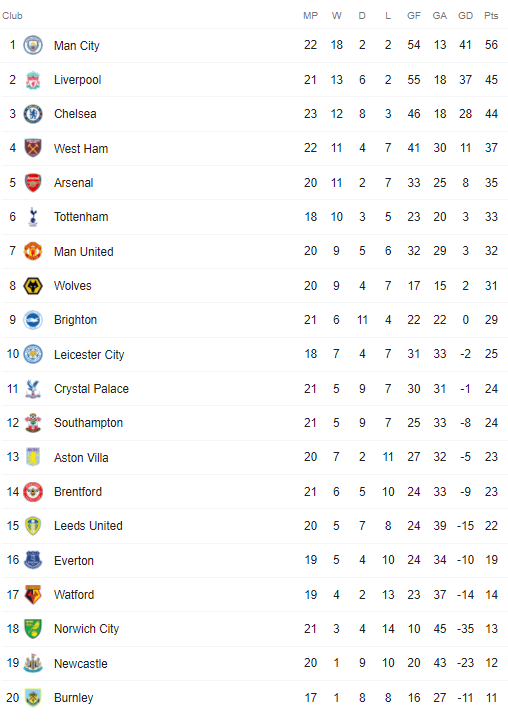 Tottenham are said to be interested in landing Jesse Lingard in the summer but no chance of Man Utd allowing them to have the midfielder now, with Spurs two games in hand and a point ahead of Man Utd.

The same with West Ham, who are currently five points ahead of Man Utd.

In his second half of the season loan with the Hammers last season, Jesse Lingard hit phenomenal form as he was directly involved in 13 goals in just 16 Premier League starts, scoring nine and four assists.

If Jesse Lingard could provide anything close to that return for Newcastle United in their final 18 PL matches, it would be VERY welcome.

The Manchester Evening News claim that Jesse Lingard has wanted a move back to London but with the likes of West Ham and Spurs, as well as Arsenal and Chelsea ruled out, you are only really left with clubs such as Palace and Brentford.

It could be right place right time for Newcastle United, as if Jesse Lingard did come on loan, he could insist on no permanent option, leaving him to negotiate a move to Tottenham or wherever in the summer, having got some games in (and goals and assists!) in the meantime, to keep him in the England picture.

With only 12 minutes of Premier League football since Ralf Rangnick arrived, it is transparent that nothing major is going to change for Jesse Lingard in terms of opportunity at Man Utd, so with only 12 days to go until the transfer window closes, does St James Park tick all the (temporary) boxes?