One of Newcastle United’s relegation rivals have successfully asked for the postponement of their next match, Burnley v Watford .

Sean Dyche’s team were due to take on Claudio Ranieri’s at Turf Moor tomorrow but that is now not happening.

The Premier League official announcement (see below) says that the postponement is due to injuries, Covid cases and African Cup of Nations involvement.

Obviously and absolutely nothing to do with losing Chris Wood, nor the fact they haven’t managed to spend the £25m Wood transfer fee on new recruits. 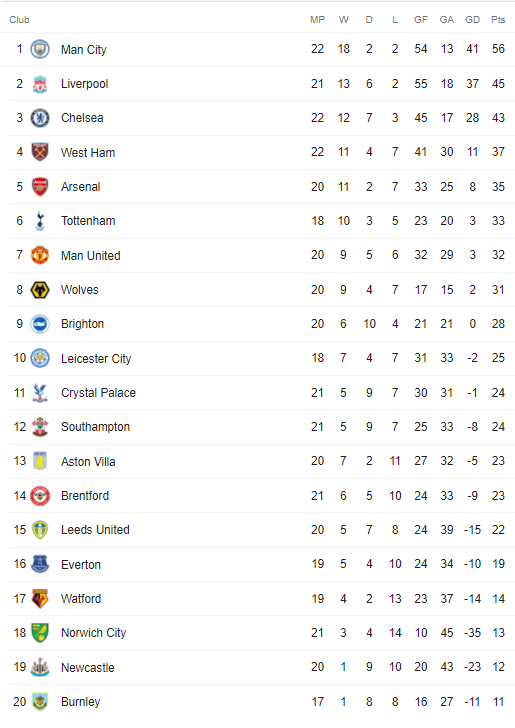 …is that it has prevented Watford opening up a potential eight point gap on Newcastle United before Eddie Howe’s side next play.

Watford are home to Norwich on Friday night, so a win in that game and one at Burnley if tomorrow had gone ahead, would have suddenly seen the Hornets on 20 points, eight ahead of NUFC. This Burnley v Watford match has now been postponed for a second time.

Newcastle of course are away to Leeds on Saturday at 3pm, whilst Burnley are due to play at Arsenal on Sunday with a 2pm kick-off. Everton have been doing their best to properly join the relegation battle and their weekend game is 12.30 Saturday at home to Aston Villa.

As you can see from the league table above, ahead of the weekend fixtures, you have Burnley having playing 17 matches, Watford 19, Newcastle United 20 and Norwich 21.

‘Burnley’s rearranged fixture against Watford at Turf Moor, due to be played at 19:30 GMT on Tuesday 18 January, has regrettably been postponed.

The Premier League Board accepted Burnley’s application with the club having fewer than the required number of players available for the match (13 outfield players and one goalkeeper), due to ongoing COVID-19 cases, injuries and representation at the Africa Cup of Nations.

This follows Burnley’s home match against Leicester City on Saturday being called off.

The League apologises for the inconvenience and disruption caused to supporters who would have attended or watched the game – we are fully aware that postponements disappoint clubs and fans.

The League aims to provide as much clarity as possible, but unfortunately postponements sometimes have to be made at short notice, as safety is our priority.

Where possible, the League will endeavour to keep supporters updated if games become at risk.

The Premier League’s postponement rules are designed to protect the wellbeing of players and staff, while maintaining the sporting integrity of the competition.

Club requests are assessed on a case-by-case basis, based on existing rules and adapted COVID-19 postponement guidance, implemented in light of the Omicron variant.

The Board examines a number of factors, including the ability of a club to field a team; the status, severity and potential impact of COVID-19; and the ability of the players to safely prepare for and play the match.

The detail within all applications is scrutinised by the League’s specialist staff before the Board makes its decision.’