The home side appearing to have pulled themselves out of trouble, at least for the time being, with consecutive wins against Burnley and West Ham, this after starting the season with only three wins in their opening 18 Premier League games.

Leeds are now eight points clear of the relegation zone and ten points ahead of Newcastle.

Norwich winning 3-0 at Watford on Friday night, leaving the Premier League table looking like this on Saturday morning: 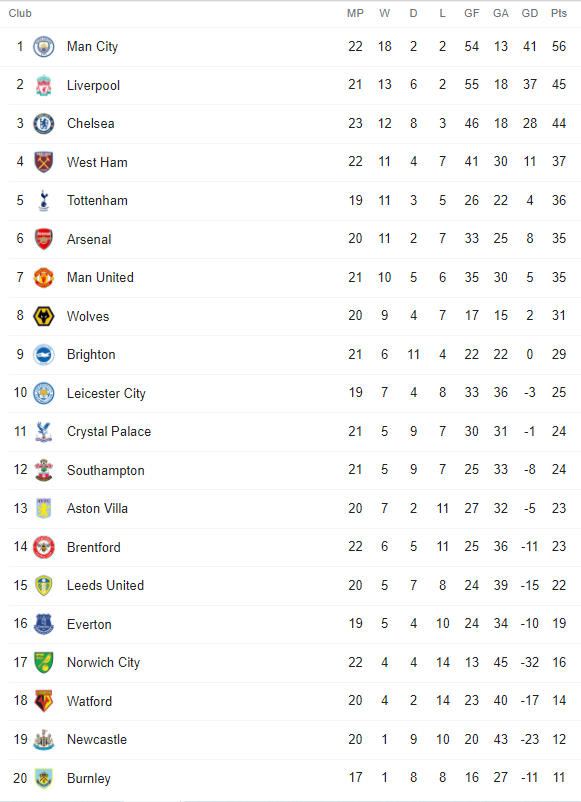 Meanwhile, Newcastle United continue to find ways to stop themselves winning games after taking the lead.

So is today the day that the tide can be turned

Well, in advance of the match, Eddie Howe has indicated that he is set to be missing at least five Newcastle United players, whilst four others are set to be available once again as potential starters for this Leeds match.

Howe indicating the same with Ciaran Clark, although he is now nearing a return and ahead of the trio above.

Meanwhile, Eddie Howe revealing that Matt Ritchie now has a knee problem, which will surely see him miss out today, especially with now options on the left looking a lot more positive.

The Head Coach says that on a more upbeat note, he has both Dwight Gayle and Jeff Hendrick back training and available for this Leeds game.

Whilst Jamal Lewis is also in contention today, after a five week absence. He made the bench last weekend after just a couple of training sessions but was clearly not fit enough to be involved. There was simply a space on the bench so it got him back involved, that bench having included two goalkeepers and teenager Elliot Anderson, as Eddie Howe struggled for outfield first team options.

Paul Dummett did really well on his return after an eight months absence but gives little gong forward. Whereas Lewis does get up and down the left and had been impressing in his handful of starts under Eddie Howe before injury struck at Anfield. The left-back having been completely sidelined by Steve Bruce despite him paying £15m for the Northern Ireland international, Lewis not getting a single Premier League start in Bruce’s final eight months at the club.

Javier Manquillo is also back available, having served his one match suspension last weekend.

I would guess most Newcastle United fans would see the four returning players as probably making little difference to Howe’s choice of his team today, with the possible exception of Jamal Lewis. However, at least the bench should look significantly stronger hopefully, plus at least having the option of throwing another striker on in the shape of Dwight Gayle if Newcastle are desperate for a goal.

Eddie Howe on the Newcastle United injury / fitness situation ahead of playing Leeds:

“A couple of players have returned to the training ground.

“Dwight Gayle we have had back in training this week.

“Jeff Hendrick has returned to training this week.

“Matt Ritchie has got a knee problem so we will have to assess how he is, and of course we are missing the long-termers – Fede Fernández, Callum Wilson and Isaac Hayden.

“Ciaran Clark is nearing a return.”

“I think they have a way of playing and they follow that.

“There’s a lot to admire about Leeds’ out of possession work. It’s really intriguing.

“They play with a really high intensity and we have to match that.

“With the ball, they have got their set patterns and way of playing and it’s very, very effective.

“This is a totally unique game – I think there is no other game like Leeds in the Premier League – and we have to be ready for what we’re going to face.

“I think Marcelo Bielsa is one of the best managers in world football, for me.

“He’s got a very unique idea and it is slightly different to the norm.

“I think anyone that has those strong beliefs and is slightly different, has my full respect, because he’s also been successful and he’s brought his idea and his identity to many different clubs.

“I really enjoy his ideas and how he takes elements of the game and really breaks them down, coaches his players in the specifics, getting the details across to them. I’ve got a lot of respect for him.”