Miguel Almiron stands at a bit of a crossroads.

Set to turn 28 in February he has now been at Newcastle United for just 11 days short of three years.

The Paraguayan’s arrival saw Rafa at last able to play a more attacking style in the majority of matches, Almiron’s pace added to what Perez and Rondon brought to the table, helped inspire Newcastle to the fifth best form in the Premier League in Benitez’ final 16 matches, plus the fifth highest number of goals in those 16 games.

Newcastle United players getting ‘Pardewed’ became part of the vocabulary during his era in charge, players seen to have found their form / contribution negatively affected under the then manager.

Well, Miguel Almiron appears to have been well and truly ‘Bruced’ these last couple of years. The coaching under Steve Bruce and the extreme negative style of play the Head Coach used in the vast majority of matches, seeming to totally stifle the Paraguayan’s natural game. Steve Bruce effectively just using Miguel Almiron in the vast majority of matches.

After Eddie Howe came in, Miguel Almiron found himself on the sidelines and eventually getting his first start under the new boss on Saturday 4 December, Almiron playing well and playing a full part in the first and so far only win of the season, against Burnley.

However, after starting the 4-0 defeats to both Leicester and Man City, Miguel Almiron hasn’t had a Premier League start since 19 December and when getting minutes as a sub since then, has looked really poor, at times looking as if he is trying too hard and struggling to even control the ball at times as he tried to run with it and help NUFC. Surely his lowest point of the season though was Saturday, Newcastle in a must win game with Watford, leading 1-0 with four minutes to go, Eddie Howe bringing Almiron on for ASM to help tighten NUFC’s left side. Only two minutes later, a ridiculously simple one-two saw Miguel Almiron embarrassingly caught out and the cross was met by Pedro to head the equaliser, Lascelles’ challenge as bad as Almiron’s defending.

Miguel Almiron desperately needing a lift and to find form, very unlikely to get a start this Saturday at Leeds, Newcastle have announced (see below) that the 27 year old has been called up to play for Paraguay in this 17 day gap between Leeds away and Everton at home (8 February). Hopefully perfect timing to spark him into form.

With his Newcastle United future in the balance, Miguel Almiron finds himself in a last chance saloon situation with Paraguay. When the following World Cup comes around in 2026, Almiron will be 32, so this one in Qatar looks realistically like his last chance to make a major impression, if he can get there…

This is how the South American qualifying table looks at the moment with four rounds of games left to play: 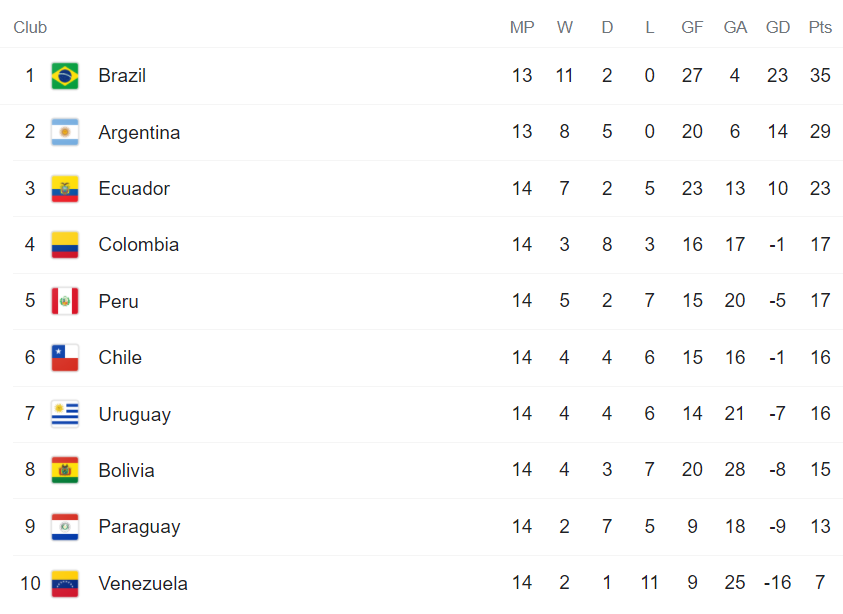 The top four automatically qualify for Qatar, whilst the fifth goes into an all or nothing two-legged qualifier.

These are the matches Paraguay have left:

Despite being second bottom of the table and only two wins from 14 qualifiers, Paraguay are only four points off fourth and fifth, appearing to give them some chance of qualifying.

However, in reality, with so many teams between Paraguay and qualifying, those teams will be playing each other in many of the remaining matches and so somebody has to pick up points.

For Paraguay, I think they have to win the other three and get a draw in Brazil to stand any chance of even fifth and into the qualifier. Though maybe it will need wins in all four.

Back in 2018, Paraguay finished seventh with 24 points in the South American qualifying for the World Cup in Russia.

Columbia filling the last automatic qualifying spot in fourth with 27 points, whilst Peru were fifth on 26 points and went into a play-off for final qualification. Peru beating New Zealand to make it to Russia.

As it stands, 10 points would only get Paraguay to 23 points, four wins to 25 points. Whilst there is a chance qualifying could need a slightly lower number of points this time, it won’t be too many less.

Of more importance to Newcastle United fans, you just hope that whatever happens in these two internationals, that getting some time on the pitch will help focus Miguel Almiron and when he returns to St James Park, can make some kind of positive contribution to the home games with Everton (8 Feb) and Villa (13 Feb), then continue that into the other 15 remaining matches of this survival battle.

‘United’s Miguel Almirón has been called up to Paraguay’s squad for their upcoming World Cup qualifiers against Uruguay and Brazil.

Paraguay have only won two of their 14 qualifiers so far but, with four games remaining, are still in with a reasonable chance of making it to Qatar, lying four points adrift of CONMEBOL’s final automatic place, with an additional play-off spot still up for grabs, too.

The Paraguayans last made it to a World Cup in 2010, when they progressed to the last eight of the competition before being edged out by eventual winners Spain.

Almirón – one of two English-based players to receive a call-up, along with Nottingham Forest’s Braian Ojeda – is now one of La Albirroja’s most experienced campaigners, with 41 caps to his name.’