The African Cup of Nations kicks off this weekend.

Cameroon are hosting this time and 24 countries are competing.

The group games start on Saturday 8 January and 29 days later the final will be played on Sunday 6 February.

With these finals falling in the middle of the Premier League season, as well as those of the other European leagues, we have once again seen any number of club v country discussions.

However, if Premier League clubs choose to sign players who play international football for countries in this part of the world, it comes as part of the package.

Back in the day, Newcastle United found themselves without the likes of Papiss Cisse, Cheick Tiote and Demba Ba, though now in January 2022 none of the NUFC first team squad are involved.

So when it comes to the Premier League relegation fight, exactly how do this latest African Cup of Nations (AFCON) impact?

The Athletic have done a rundown on how all Premier League clubs are affected (or not) but we are only concentrating on those at the bottom.

This is how the current Premier League table looks on Wednesday 5 January 2022: 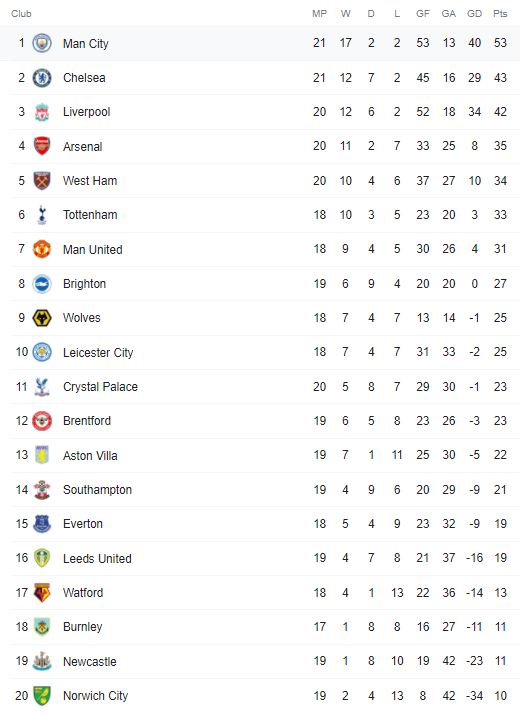 So starting at the very bottom, these are the players that Premier League clubs will be missing in the coming weeks:

Maxwel Cornet is Burnley’s only participant at the Africa Cup of Nations.

The Athletic report: ‘As many as six Watford players could have been AFCON-bound but injuries and politics reduce that to just three definites, as it stands.

Ismaila Sarr is going to be assessed by Senegal medical staff to ascertain whether he will be able to feature in the latter stages, but Emmanuel Dennis was excused from Nigeria’s squad, having initially been named in the provisional group amid controversy.

While Dennis is playing for Watford and excelling, Sarr has been missing since November’s 4-1 win over Manchester United and Watford are adamant he is not fit to play any part.

Peter Etebo’s thigh injury means it’s just William Troost-Ekong with the Super Eagles as captain for the tournament, which comes at a welcome time after a tricky run of form.

Adam Masina and Imran Louza — who missed November’s Arab Cup — flew off in a private jet after the late Tottenham defeat to join up with Morocco, who aren’t as strongly fancied as Senegal or Nigeria.’

Only Alex Iwobi is off to the tournament.

Moussa Djenepo is the only Southampton player who will feature.

Not difficult to see who is going to be worst affected, Newcastle United have to beat Watford in 10 days time and hope they continue to struggle otherwise.

That Cornet looks a very decent player, so Burnley will hopefully find him a miss as well.