Suddenly after Boxing Day results, now see Newcastle and 4 others for 3 relegation places

Christmas is often seen as the time of year when there is a real shake of the Premier League, potentially at both ends.

So many games in a brief period of time leading to very definite winners and losers.

Well, after these 3pm Boxing Day kick-offs, I am certainly getting the feeling that the bottom end of the Premier League has been given major shake and things look very much clearer.

I know that this round of fixtures is only one of three in the space of a festive week…but these were the results this afternoon.

As you can see, only four 3pm Premier League games going ahead but a massive 22 goals between them. The kind of set of results that you often see people nostalgically looking back on from distant years…

As Newcastle United fans we have survived on a diet of pure nostalgia for far too long and whilst we do undoubtedly have hopes of better times ahead under the new ownership, these results on Boxing Day afternoon have given the Premier League a very them and us look… 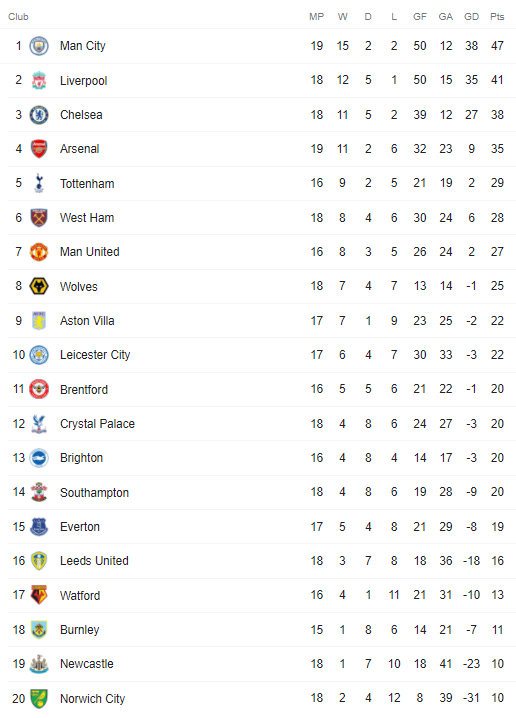 Aston Villa v Chelsea is currently playing (Boxing Day 5.30pm kick-off) and then it is Brighton v Brentford at 8pm tonight, with Newcastle against Man U completing this round of matches tomorrow night.

I know things are further complicated by how many matches teams have and haven’t played due to Covid cases BUT I can now see a very different relegation picture has formed.

I think that this Southampton win at West Ham this afternoon, has seen them taken out of the relegation picture. I reckon if you are on 20 points now, you probably only need four wins in the next 20 games (in their case) to stay up, along with a number of draws they are sure to get, I think that will take them easily beyond the 35 points or so that will surely equal safety this season.

For the same reason, that is why I look at Palace as pretty safe looking (compared to Newcastle United anyway!) despite their defeat at Spurs, along with Brighton and Brentford who meet tonight. All three already on 20 points and well on their way to getting the 35+ that is probably needed.

I honestly see it now as being between that bottom five in the Premier League table and yes I know Burnley and Watford have games in hand as things stand, I don’t see their positions radically changing any time soon.

Indeed, if I’m really honest, Norwich are surely already booked in for their return to the Championship and so to me, it is a case of two from four out of Leeds, Burnley, Watford and Newcastle United. I am not taking anything for granted this season but Newcastle will have been truly rotten if they don’t finish ahead of Norwich by the time we get to May.

The NUFC matches against Watford (at home, 15 January) and Leeds (away, 22 January) are looking ever more pivotal.

Obviously other games to play before then but you just hope that Newcastle United’s owners will get the necessary signings in during the first week of January, ensuring they can make a difference in these couple of relegation six-pointers. Although there again, I don’t think ‘six-pointer’ really gets it across just how important these results are likely to be.

The only other possible club that could join the relegation party are Everton, in my opinion.

A run of only one win and seven defeats in their last 11 Premier League matches, has been an outstanding effort to try and join in.

Always possible they could start and find form but it is intriguing to just wonder how things would look, if Newcastle could beat them home and away, as happened last season. Newcastle due to play at Goodison on Thursday (30 Dec) and then welcome Rafa Benitez back to St James Park on Tuesday 8 February.

When I look at these next six games of Man U home, Everton away, Southampton away, Watford home, Leeds away, Everton home, it would take Newcastle up to 24 Premier League games played, only 14 remaining. The more I look at it, I see NUFC needing at least 10 points from a possible 18, if we are to go on and dodge relegation. It isn’t impossible but obviously needs a massive upturn after 10 points from a possible 54 so far.

If you accept Newcastle won’t get anything from Liverpool at home and Man City and Chelsea away, even if NUFC got 10 points from these next six, Eddie Howe and his team would still need 15 points from the other 11 (of the final 14) PL games to reach 35 points.

As the NUFC Head Coach is insisting though, we take one game at a time. A win over Man Utd tomorrow night would then leave Newcastle United needing ‘only’ 22 points from the final 19 games to reach 35 points by the end.

The whole situation is daunting but at least we are in company at the bottom of the Premier League table, for now…