Ralph Hasenhuttl is getting his retaliation in first, ahead of Sunday’s scheduled match against Newcastle United.

Speaking after a 1-1 draw with Tottenham on Tuesday, the Southampton boss challenging the idea of this Newcastle match potentially getting postponed.

Ralph Hasenhuttl was talking after rumours emerged that Newcastle’s trip to Everton on Thursday (30 December) could be called off, which would then make the Saints game three days later also potentially at risk.

Following the Southampton manager’s comments on Tuesday afternoon, last night the Premier League did indeed agree to Newcastle’s request for the Everton match to be postponed.

So with Southampton maybe next in line, has Ralph got an argument?

“There is talk about cancelling games because teams have a lot of injuries but there were times last season, where we had nine out injured and we played academy players.

“That was maybe the toughest half of a season here.

“Injuries are not Covid cases.

“Injuries are also here for us.

“They [Newcastle United] had seven or eight players on the bench during their last game and now they have two more injuries.

“They should still have thirteen players plus one [goalkeeper].

“This is the message from the Premier League.”

This is how the Newcastle United player availability for Everton looks to me:

Jamal Lewis, Federico Fernandez and Paul Dummett were all missing through injury on Monday and it now appears we can add Callum Wilson, ASM and Ryan Fraser as other injured players who definitely couldn’t start at Everton.

The following were unexpectedly missing from the matchday squad against Man Utd:

Karl Darlow, Ciaran Clark, Matt Ritchie, Joe Willock. Most or all of these were the Covid cases that Newcastle now have and who missed Man Utd and helped cause Everton to be off.

In addition, Javier Manquillo was suspended for the Everton match due to his fifth booking that was picked up v Man Utd.

So to me, at best, the Eddie Howe head count for Goodison looked like this:

That is the entirety of Newcastle United’s senior 25 man squad, with it looking very much to me like three goalkeepers and only 11 outfield players available for Everton. Not enough to meet that minimum requirement of 13 outfield players plus goalkeeper(s).

So what about this Southampton match?

Well, Newcastle did have eight subs on Monday night as Ralph Hasenhuttl indicated…but two were goalkeepers and two were teenagers who have never started a Premier League match before. Apart from the three subs that were used (Gayle, Murphy and Almiron), Hendrick was the only other senior outfield player on the bench.

I take it that Manquillo’s one match suspension will now be effective for Southampton, so he still can’t play.

Of course, some of these could now be injured and / or positive Covid cases…

On a brighter note, those who missed out against Man Utd due to Covid, could potentially be back for Southampton, depending on when their seven day isolation will end. I would have thought unlikely, plus they won’t have been able to join in group training in the meantime.

Of the injured players, Ryan Fraser is probably the only one who potentially could be back.

You can understand where Ralph Hasenhuttl is coming from, to an extent, but as you can see from the Premier League table on Wednesday morning: 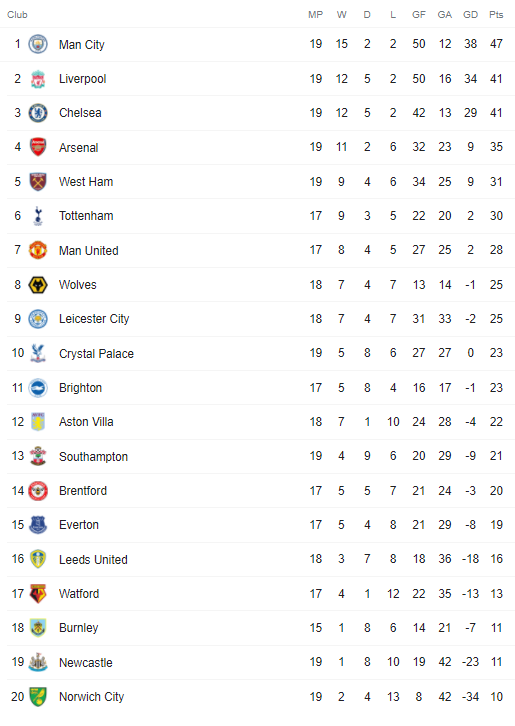 Nobody has played more games than Newcastle United so far and indeed only three others also played all of the first 19 matches, these all being top four clubs in Man City, Chelsea and Arsenal, who have top quality big squads with also numerous very good under 21 players to call on as well.

Interesting to see now whether Newcastle United do indeed put a request in to postpone this Southampton match…and how the Premier League respond.