Quite bizarre – Eddie Howe forced into defence of Allan Saint-Maximin

Last week I was tipped over the edge when it came to Allan Saint-Maximin.

The nonsense spouted from some of our so called fans was becoming quite extraordinary.

The only explanation surely for the bizarre views and their cluelessness about football, must be the fact they had never kicked a ball in anger themselves. A collection of adult NUFC fans, who as kids were the ones left standing in the schoolyard not taking part in games.

These were some of the comments I found from Newcastle United fans last week on Allan Saint-Maximin:

‘He’s a poor man’s Lua-Lua, and to be honest, I no longer know if I’m referring to Lomana or Kazenga.’

Eddie Howe forced to come out and defend Allan Saint-Maximin ahead of the Man Utd match – 23 December 2021:

“Maxi is a huge player for us.

“He is the catalyst for many of our good things.

“You look back at the Liverpool game where he played as a striker…I thought he was excellent in that game. In moments when we were able to give him the ball, utilise his pace and dribbling ability on the counter, he was devastating at times.

“When he came on against Manchester City, once again, he had moments where he played a couple of lovely passes through to Callum [Wilson].

“Allan looked a threat on the counter in that match as well.

“It is all about us as a team trying to function well enough, to then allow him to showcase his talents.

“He is such a dangerous player and we are still working out the best way to utilise him in all phases of the game.

“However, we know that when we can get him more of the ball in those attacking areas, that is a big part of what we are trying to do at the moment.”

The bottom line is…if Newcastle United do get a point or better against Man Utd, you can almost take it for granted that it will be mainly down to Allan Saint-Maximin.

As Eddie Howe makes clear, ASM hasn’t had the best platform so far to show what he can do under the new Head Coach. At least in most games.

Allan Saint-Maximin was still Newcastle’s biggest threat in these last three matches against Leicester, Liverpool and Man City despite being (at least!) double marked and invariably having to start his runs from deep inside Newcastle’s half.

In Howe’s very first game, ASM was excellent against Brentford, scoring and a constant threat, then running from his own half to set up Joelinton to score the winner, only for the Brazilian to fluff it with just the keeper to beat.

Against Norwich ASM was a threat despite Newcastle playing almost the entire game with 10 men, then Allan Saint-Maximin a key part of the win over Burnley.

As you can see, after ASM and Wilson, we literally have nobody scoring and / or creating many goals. Who are these brilliant alternatives that ASM’s critics would play ahead of him? I like Almiron BUT the fact is, he is still to provide a single PL goal or assist this season.

Here is a table from the excellent ‘Other14‘, who do stats and analysis on the teams and players that are not the ‘big six’ clubs. 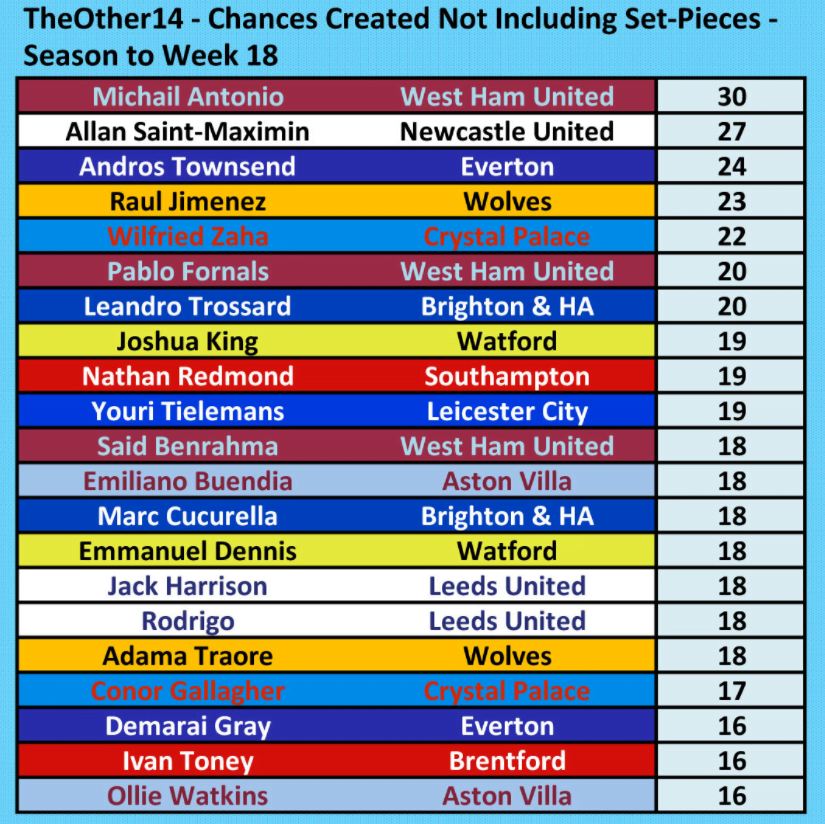 Allan Saint-Maximin not only Newcastle United’s best player…but also one of the most effective in the entire Premier League, certainly outside of those at the very top.

Despite Newcastle struggling so badly all season, of the ‘other 14’ teams, only Antonio (who is having an outstanding season playing for a team in fifth) has created more chances (30) for teammates than the 27 ASM has.

As Eddie Howe indicates, get Newcastle United playing higher up the pitch and have ASM getting on the ball up there, especially before teams can set themselves up with a mass defence, then we will give the Frenchman a real chance to be devastating.

Allan Saint-Maximin is the key asset for Newcastle United and along with Callum Wilson, we could see a very different threat if the right signings are made in January. Until then, we can just hope they can make the best of a bad job in having to play in the current set up.