Interesting overview of Newcastle United for the relegation fight this season and tonight’s match against Manchester United.

They have analysed all Premier League matches, including Newcastle United against Manchester United.

Their computer model gives Manchester United an 56% chance of a win, it is 23% for a draw and a 21% possibility of a Newcastle win (percentage probabilities rounded up/down to nearest whole number).

When it comes to winning the Premier League title, they have the probability of Man City a 68% chance, Liverpool 26%, 6% Chelsea and the rest nowhere.

As for the bookies, they rate Newcastle United a 6/1 chance to beat Man Utd, the bookies actually giving NUFC less chance of winning than this stats model does. The bookies rating a draw at 4/1 and Man Utd winning are odds on 1/2.

As for the relegation picture, unlike a purely stats model, the bookies do take into consideration other factors, such as changing the Head Coach and having new owners, with an expectation of strengthening the squad in January.

The bookies seeing this developing very much into a four or five way fight at the moment, with only two of Norwich, Newcastle, Watford, Leeds and Burnley surviving.

This is how the Premier League table looks on Monday morning ahead of the Man Utd match: 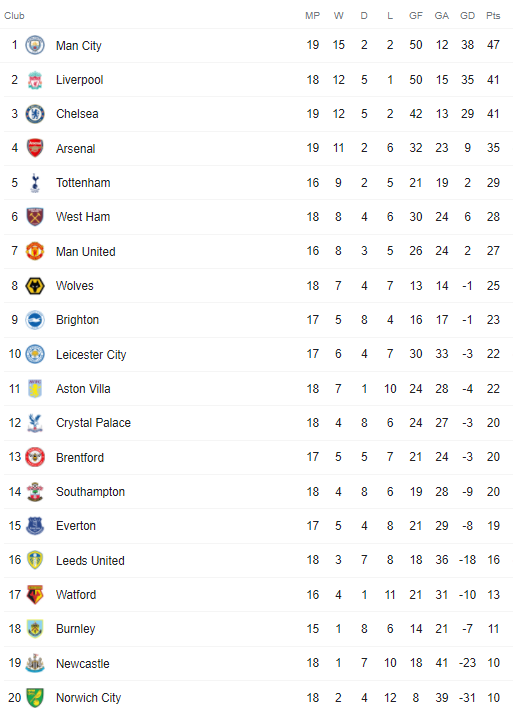 Southampton’s win at West Ham convincing many that they are no longer serious relegation candidates, whilst Brighton beating Brentford last night also looking to distance Graham Potter’s side from every possible danger.

Everton are doing their best to join in properly with the relegation struggle, currently on an 11 match run of one win and seven defeats, plus three draws.

Newcastle play Everton home and away within the next six NUFC Premier League matches.

Postponed games are set to see Newcastle United enter 2022 with the likes of Watford, Burnley and Leeds all with games in hand. For NUFC, it is simply a case of ignoring that and putting points on the board against Man Utd and Everton this week, then Southampton away on Sunday.

With the potential of new signings available for the Watford home game on Saturday 15 January, hopefully…