Interesting overview of Newcastle United for the relegation fight this season and Thursday’s match against Liverpool.

They have analysed all Premier League matches this midweek, including Newcastle United against Liverpool.

Their computer model gives Liverpool an 87% chance of a win, it is 9% for a draw and a 4% possibility of a Newcastle win (percentage probabilities rounded up/down to nearest whole number).

When it comes to winning the Premier League title, they have the probability of Man City a 56% chance, Liverpool 35%, 9% Chelsea and the rest nowhere.

As for the bookies, they rate Newcastle United a 25/1 shot to win at Anfield, which is very much in line with the 4% chance that this stats model gives NUFC.

As for the relegation picture, unlike a purely stats model, the bookies do take into consideration other factors, such as changing the Head Coach and having new owners, with an expectation of strengthening the squad in January.

The bookies seeing this developing very much into a four way fight at the moment, with only one of Norwich, Newcastle, Watford and Burnley surviving.

This is how the Premier League table looks on Wednesday morning: 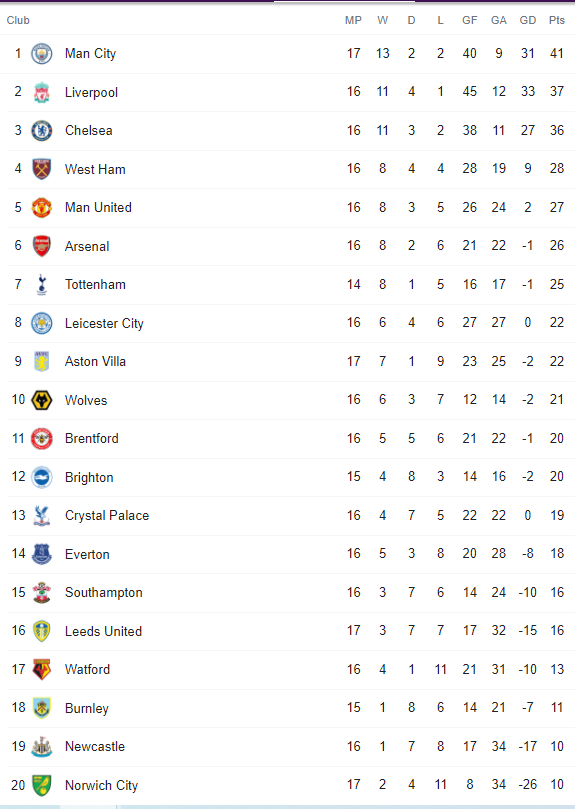 The midweek programme got off to a perfect start on Tuesday night, with Norwich losing 2-0 at home to Villa, you really have to think the Canaries are booking one of the three relegation spots.

Whilst Leeds got a 7-0 pasting at Man City, keeping them only six points above Newcastle and their goal difference only two goals better than NUFC.

Survival will of course only be achieved by Newcastle United winning matches BUT it will be a massive help if it ends up with a number of other clubs really struggling. Last season, it only took 29 points to survive and whilst I can’t see it being as low as that this time, hopefully Newcastle won’t need significantly more points than that.

‘My faith in Eddie Howe is now being tested’

The key unspoken reason why Newcastle United are failing