Ahead of the Man Utd match I had been looking at the Premier League relegation battle.

Looking at what possibly / probably would be needed for Newcastle United to survive.

Last season, 29 points was needed to stay up, a very low safety point as Fulham (28), West Brom (26) and Sheffield United (23) never ever really looked like staying up.

This season, things can always change quickly, but there definitely looks like at least five clubs are set for a season-long relegation struggle – Norwich, Newcastle United, Watford, Burnley and Leeds.

After the Man Utd match I saw a lot of positivity about the performance BUT a lot of negativity from Newcastle fans about two points dropped.

I understand totally because NUFC clearly deserved to win, so many more very good chances created than Man Utd did, who even had massive luck on the goal they did score.

However, in the cold light of day, Newcastle United are now one point ahead of their Premier League survival schedule, at least by my master plan…

This is how the Premier League table looks on Thursday morning: 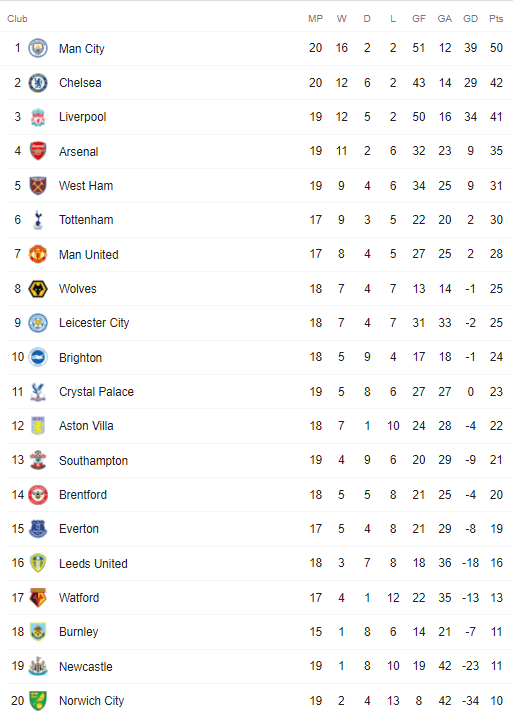 Newcastle United gained a point in a game where pretty much everybody, certainly outsiders, expected them to get nothing.

Whilst the following day both Norwich and Watford got hammered, the Canaries losing 3-0 at Palace, whilst the Hornets took a fourth minute lead but got stuffed 4-1 at home by West Ham.

That is all that this is about, getting more points than those around us. Three points would have been class and justified BUT one point against Man Utd was still a gain.

These are the 19 games that Newcastle United have left, in order to reach Premier League safety.

Newcastle United not ‘Big Six’ fixtures to come (In order):

The way I am looking at it, is that I expect nothing from these games against the ‘big six’, so that is especially why I take that draw against Man Utd as a positive. Particularly when you consider the first half dozen matches of the season against ‘big six’ sides had produced six defeats AND 19 goals conceded – compared to 21 goals conceded in the other 12 PL matches before Monday.

As for the remaining games against the rest, I am thinking that a fair return is going to be averaging two points per match in the seven at home, one point on average in the seven away games:

Those 21 points would then take us up to 32 points, which I think is definitely getting well within touching distance of safety.

Which then I think leaves Newcastle needing to finish above Burnley or Leeds to ensure safety.

I think that with some January signings and fair luck when it comes to injuries and what happens in the 90 minutes, NUFC can outperform both of these in the next four or five months.

Having cleared Ashley, Bruce, Charnley and Sports Direct out, the unity at St James Park has been something special, the atmosphere on Monday night was class.

In these seven home matches I am expecting at least two points on average per game to give us 14 points from them, though I do think realistic to pick up more than that, with at least five of the seven games to be winning ones.

Away from home I see one point on average per game as an absolute minimum against the non ‘big six’.

I also wouldn’t be surprised at other ‘unexpected’ points against the ‘big six’ clubs as well now, Man City and Liverpool are a different proposition but certainly home to Arsenal and away at Spurs aren’t impossible to think a couple of points could be picked up.

I think we are edging up to an achievable 35 points or so and that would be enough I’m pretty sure. I hold my hands up and if indeed it proves to be 40 points needed for safety this time, then I don’t think from this starting point, Newcastle could now do that.

The road to survival started with that point against Man Utd, now in January we can build on that.

Football – A matter of life and death