Newcastle United injuries and Covid cases have combined to call off tonight’s match at Goodison Park.

The Man Utd match did go ahead BUT Eddie Howe was only able to name eight substitutes and two of them were goalkeepers and another pair were teenagers, neither of who had ever started a Premier League game previously.

More Newcastle United injuries picked up in Monday night’s match tipped it over the edge, with Eddie Howe not able to name 13 fit and available outfield senior players for the matchday squad against Everton, leading to the postponement.

Late Wednesday had brought some encouraging news on the Newcastle United injuries front, with The Mail bringing updates on ASM and Callum Wilson.

In the aftermath of Monday’s game, initial reports were that Wilson was set to be missing for months and that ASM would be missing at least for a number of weeks. However, The Mail yesterday said that their information was that the news on Callum Wilson is now far better than originally thought, with the striker likely to be out for around four to six weeks, not months as initially feared. Whilst they also reported that Allan Saint-Maximin’s calf issue ‘is not serious at all’, apparently indicating he may even be available for Southampton away on Sunday, if that game goes ahead.

However, another negative has now come to light when it comes to the subject of Newcastle United injuries impacting on the squad, with Isaac Hayden having posted a photo of himself in a hospital bed with a protective support on his knee and captioned it with ‘My new best friend for a while’… 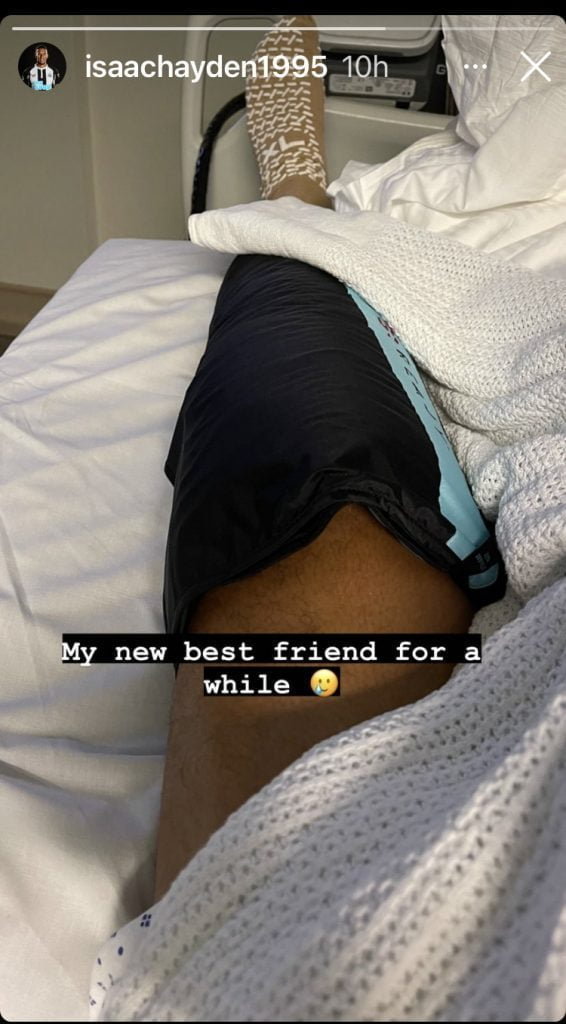 Hayden started the game against Man City 11 days ago but was subbed after an hour, then was suspended for the Man Utd match. Now it appears that clearly Hayden’s injury helped contribute to Everton being called off.

This doesn’t look good for Hayden and it looks like it will be a while before he is available once again.

Paul Dummett, Federico Fernandez and Jamal Lewis continue to be missing for the foreseeable as well.

Whilst Ryan Fraser is reported to be carrying a hamstring issue and limped off against Man Utd.

With Covid cases having hit the NUFC squad, we saw Ciaran Clark, Matt Ritchie, Joe Willock and Karl Darlow absent on Monday night and seemingly some or all of these players impacted by the virus.

We all now await new on whether Southampton goes ahead, Manquillo suspended for that one doesn’t help either.

Much will depend on whether the likes of Fraser and ASM are fit enough to bounce back in time for Sunday, plus of course the unknowns as to whether there are any other unknown injuries after the Man Utd match and / or Covid cases.