Eddie Howe has now been in the job for just over four weeks.

The appointment of the new Newcastle United Head Coach to try and help pull the team out of the mess left behind by Mike Ashley and Steve Bruce.

Eddie Howe coming in with a clear and very definite work ethic.

First day at work and the new Head Coach and his coaching team leading by example, turning up at the training ground before 7am, setting the right example.

Quite a mood shift after what had gone before, never mind leading by example, Steve Bruce seemingly having an aversion to turning up at all at the training ground too often.

As well as the work ethic, we have already seen Eddie Howe also introduce a significant change of direction in how Newcastle United play.

When Steve Bruce turned up at St James Park in July 2019, he promised that his NUFC team would always play on the front foot. One of the many things that didn’t prove to be the truth under Bruce.

With Eddie Howe, he has committed to getting his team on the front foot as much as possible and the difference is, he is actually pushing through with it.

working towards this Newcastle side playing far better attacking football.

The report is from  ‘The Other 14’ (who specialise on stats/tables etc on the 14 clubs who aren’t the ‘Big Six’) which shows how many shots each team had last weekend, in this fifteenth round of PL matches: 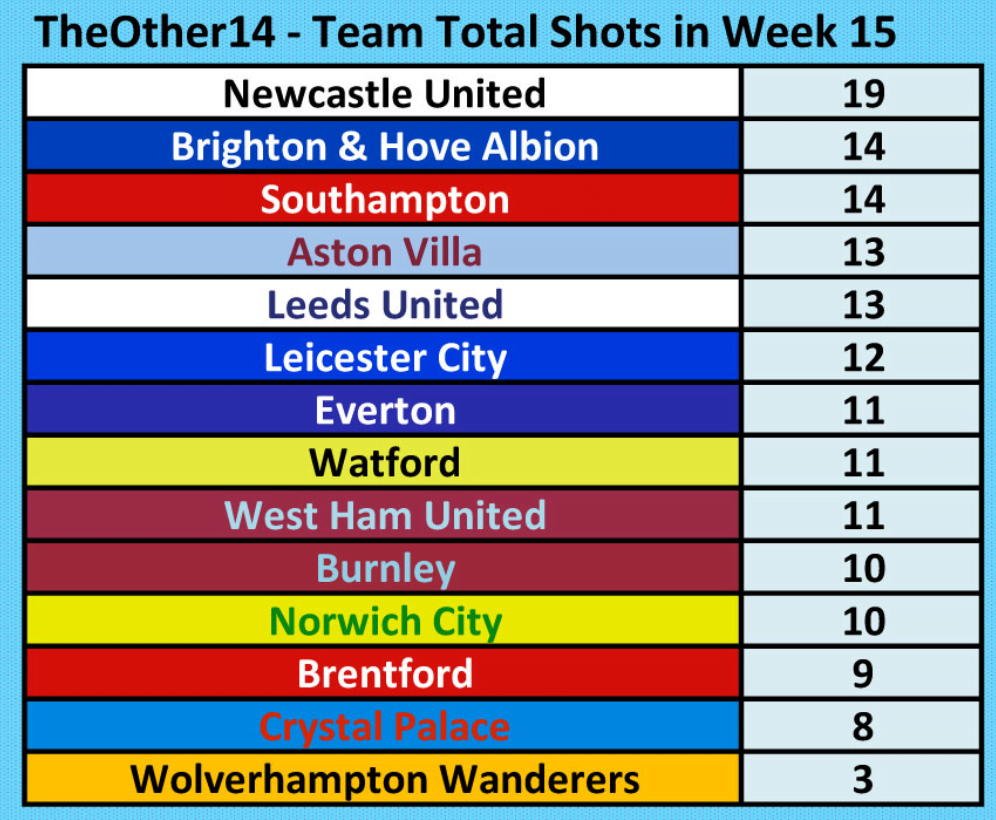 As you can see, a certain Newcastle United are way above the rest with 19 shots in total. Whilst on the other hand only three of the other 13 clubs had less shots than Burnley, NUFC’s opponent last weekend.

Considering Eddie Howe has faced so many issues to deal with since he arrived, it is heartening to see just how different the approach has been on the pitch.

Despite having to play against Norwich for all but the opening minutes, plus a tough away game at Arsenal, the stats are really encouraging.

Before Eddie Howe came in, the last five Premier League games had seen Newcastle United have a total of 33 shots across the five games, with seven on target.

In Eddie Howe’s four matches, there have been 60 shots in total, with 19 on target.

If Newcastle United are going to get out of trouble this season, it will be in the main, be relying on getting forward, creating chances and scoring goals. Keeping it as tight as possible is of course also essential but the strengths in this NUFC squad are surely in getting on the front foot, as after all, that is where the vast majority of the cash has been spent on the squad in recent times.