Eddie Howe was confirmed as the new Newcastle United Head Coach back on 8 November 2021.

The next day, exactly four weeks ago today, Howe and his coaching staff started work before 7am at the training ground.

Their work has never stopped since.

Newcastle United fans loving the professional approach introduced by Eddie Howe after the shambles that had preceded it.

The Newcastle players admitting that it has been difficult to adjust at first to not getting so many days holiday and working far harder on the training pitch.

However, those same players also stating that this was very much required and that the training under the previous NUFC Head Coach, meant they were not at the fitness levels needed.

To go with the increased fitness levels, Eddie Howe has also been working towards this Newcastle side playing far better attacking football.

A new report on this fifteen round of Premier League games has given us extra info, which absolutely highlights how very different games such as Saturday against Burnley are now, compared to the vast majority of what we ‘enjoyed’ under Steve Bruce.

The report is from  ‘The Other 14’ (who specialise on stats/tables etc on the 14 clubs who aren’t the ‘Big Six’) which shows Premier League players when it comes to most progressive yards carried, in this fifteenth round of PL matches: 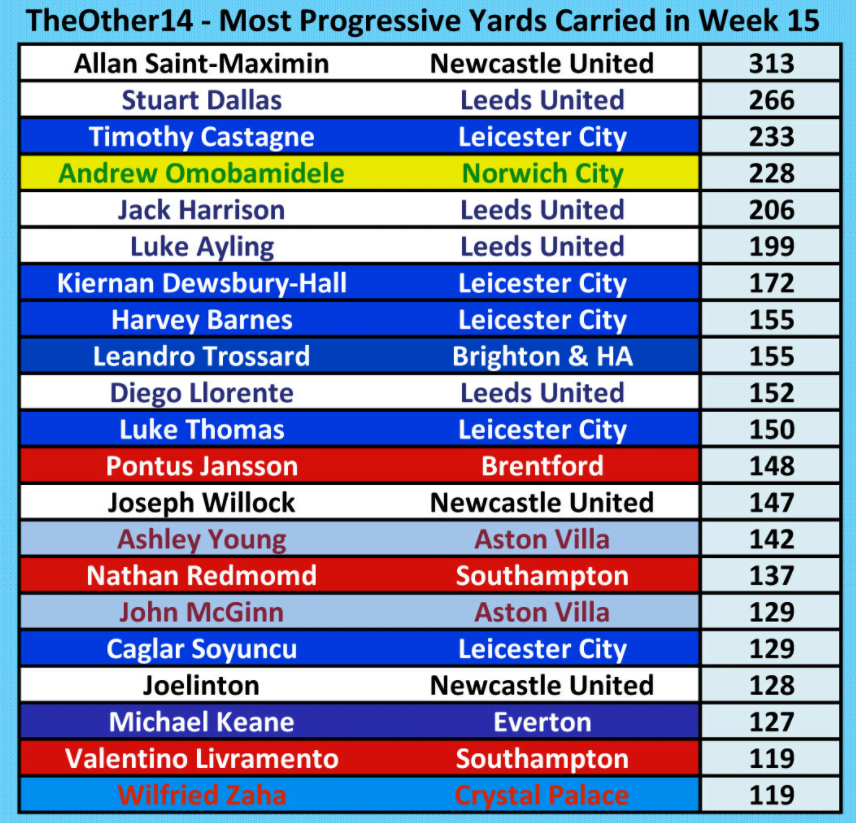 As you can see, Allan Saint-Maximin way clear at the top of this table with 313 yards carrying the ball forward against Burnley.

However, looking further down the list we also see two other Newcastle United players, Joe Willock with 147 yards and Joelinton on 128 yards.

No surprise that there are no Burnley players making this list, their method of getting the ball forward almost entirely consisting of booting it from the back.

That is the route to survival for Newcastle United and then progression, playing football and getting on the front foot, not the Steve Bruce negativity and seeing the ball repeatedly punted hopefully forward.

Long may it continue.

(Alan Shearer celebrates at St James Park “A winnnnnn and a clean sheet, is it Xmas!!!?” Read HERE)