There are 18 Premier League clubs currently above Newcastle United as we move into November and the clocks go back.

It could have been 19 Premier League clubs pressing down on NUFC but Norwich failed to win at home against Leeds, that game though was always going to be a bad result for Newcastle whatever the result, as the win for Bielsa’s team meant that the black and whites are now six points off safety with ten games played.

Norwich are the only other club apart from Newcastle who are yet to win a game, the Canaries are also the only PL club to have lost more games and conceded more goals than NUFC.

Hurrah for Norwich City, for now. 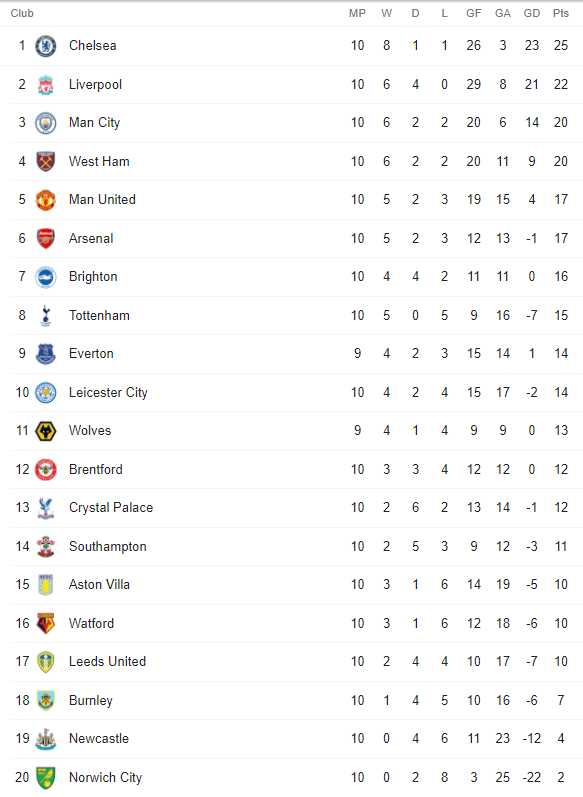 As you can see, it doesn’t look good.

The big question though is…realistically, how much improvement could we see by the time the final whistle goes on Sunday 22 May 2022 at Turf Moor, Newcastle away at Burnley on the final day of the season.

Well I think despite this horrific start to the season, Newcastle United are capable of potentially finishing above seven other Premier League clubs, the other 12 there is absolutely zero chance, by my reckoning.

No surprise that it tends to be other Premier League clubs towards the bottom end that I see as possibly still finishing below Newcastle. Basically those clubs currently 12th and downwards, with the exception of Crystal Palace.

Naturally, the starting point has to be a new manager coming in and getting Newcastle playing better football, improving at both ends of the pitch, then hopefully in a position to win some matches, such as  these ones (dates after Southampton away on 2 January 2022 are subject to change for TV, apart from Burnley away on final day)…

I think Newcastle United will have to win a minimum of nine, possibly ten, games and most of those victories will probably have to come from these ten matches above.

Of those seven clubs who I think Newcastle can potentially finish above, they have played four of them. NUFC drawing at home to Southampton and Leeds, as well as getting a point at Watford, whilst losing 2-0 at Villa. I would like to think that with a decent manager Newcastle would have won that trio of games instead of drawing them, which would have put NUFC in 16th place and level on points with Southampton and Villa in 14th and 15th. Not earth shattering and still having relegation worries BUT a world away from our current starting recovery point now.

It isn’t that I think that Newcastle couldn’t get points against some of the other Premier League clubs, providing the new manager brings improvement. I just think that it is more realistic to believe better odds against what I see as the other weaker clubs likely to finish in the bottom eight or so, plus if Newcastle win those games then they also deprive a relegation rival of any points.

Norwich – Well, we might as well give up now if anybody thinks Newcastle can’t finish above them. They are nailed on to go down and a case of hoping we aren’t one of the other two.

Watford – They were terrible when Newcastle played them and even under Bruce, it should have been a win. Everton’s defence went missing for some mad minutes late on and gifted the Hornets a win out of nothing. However, a 1-0 home defeat to Southampton on Saturday was a reminder that Newcastle have to finish above these as well, because they are surely going straight back down with Norwich.

Brentford – The other promoted club made a decent start to their first ever PL season but now with three straight defeats and the odd bad key injury, they could be set to find it tough. I don’t think they are any kind of relegation certainties but Newcastle are capable of recovering and improving past them, with a win at St James Park in the next home game absolutely vital.

Leeds – Look a shadow of their threat last season and always look likely to concede. Was little between them and Norwich yesterday and looking back, it was a killer of a result when Newcastle didn’t beat them at St James Park.

Aston Villa – Won three of their first six and looked like they might just get away with losing talisman Jack Grealish. However, losing all their last four and conceding eleven goals, the new signings haven’t quite worked out so far and a lot of fan unrest, Dean Smith potentially the next manage that could go.

Southampton – The last three games they have done what Newcastle need to start doing, the Saints winning their first two PL games of the season when scraping 1-0 wins against relegation rivals Leeds and Watford, a 2-2 draw with Burnley making it seven points from nine and putting them 14th instead of relegation zone.

Burnley – Got their first PL win at the tenth attempt on Saturday when beating Brentford. Newcastle beat them home and away last season and could do with a repeat of that.

These next home games against Brentford, Norwich and Burnley look absolutely crucial for Newcastle. Likewise the January matches which see Newcastle playing Southampton and Leeds away, with Watford at home in the middle of the pair.

These are the kind of games that are going to dictate where Newcastle United end up in May. Here’s hoping.