With all the hullabaloo going on in and around St James Park, the new Newcastle United owners, the new manager, the new ambition…

I decided to step back from it all and remember in detail, why I came to fall in love with Newcastle United football club.

I was born in 1964 and did not go to my first game until 1970, my dad was a Brighton fan (grew up in Sussex) and served in the Royal Navy, he had met my mum on a night out in Whitley Bay while his future ship HMS Ark Royal was being kitted out on the Tyne.

He settled here in Forest Hall and lived here until the day he died some nine years ago, it was he who decided to take me to my first game, a midweek scoreless bore with Huddersfield Town in about 1970. I remember he sat me on a barrier in the A wing paddock while I watched on, cold and bored, biggest memory I have of that night is the shock that the pitch was actually green, not the grey colour portrayed on a Sunday afternoon on Shoot – we only had a black and white telly.

Since that day I have only missed 18 home games. Don’t get me wrong, I am no superstar fan, in fact one season back in about 1988 I missed four in a row because of…I kid you not…a girl, love can do many things to people and suffice to say it was a short one-sided relationship before I returned to being me…yes I was savagely kerbed!

So what was it that made me fall in love with NUFC, what was the factor? Well my dad persevered with taking me and on a Monday at school it did not matter what the score was because you had been at the match, playground tales were enhanced and exaggerated with gusto amongst those that had been, while the other kids listened on intently.

Now I have been known to digress a bit from time to time and I probably just have. However, last week I was having a glance at nufc. com and I have to admit I always go through the ‘on this day in history’ column on the right hand side, and November 6th 1971 a scoreline stood out, Newcastle 3 Southampton 1. Nothing unusual about that you may think… well let me tell you different, this is my first memory of the brilliant Tony Green.

Fifty years later the memory is still as clear as anything I have seen since. Early in the game he picks the ball up about 40 yards out, advances a few yards forward before unleashing a vicious shot that cannons off the Leazes End cross bar and back out beyond the 18 yard box, to this day I remember the crowd drawing breath and my dad says to me ‘watch him son, he is something special’, so watch him I did. A short time later he picks up the ball in virtually the same spot and hits exactly the same shot toward the same goal, only this time the net was bulging and the Leazes end was celebrating en masse. The Saints could not get near him, as time and time again he left players trailing in his shadow.

Supermac was already my hero and he bagged two in the same game but seeing Tony Green , this will o the wisp type player, lightning fast over 15 yards, with quick feet and a cannonball shot, was something else. I will point out that when he arrived at SJP, Newcastle United were rock bottom of Division 1, and while his first game ended in defeat away at Everton, the next seven featured five wins and two draws as mid-table safety was achieved with ease.

Tony Green only scored three more goals for Newcastle United, in an end of season 4-2 win over WBA and an early season winner at home to Wolves on August 12th 1972,. Tragically, just four weeks later his career was over, an accidental (maybe) collision with Crystal Palace’s Mel Blyth saw him suffer a knee injury that he would not ever recover from and at the age of just 26 it was over, these days I am sure he would have made a full recovery but sadly in those halcyon days the medical science and club facilities were not what they are today. 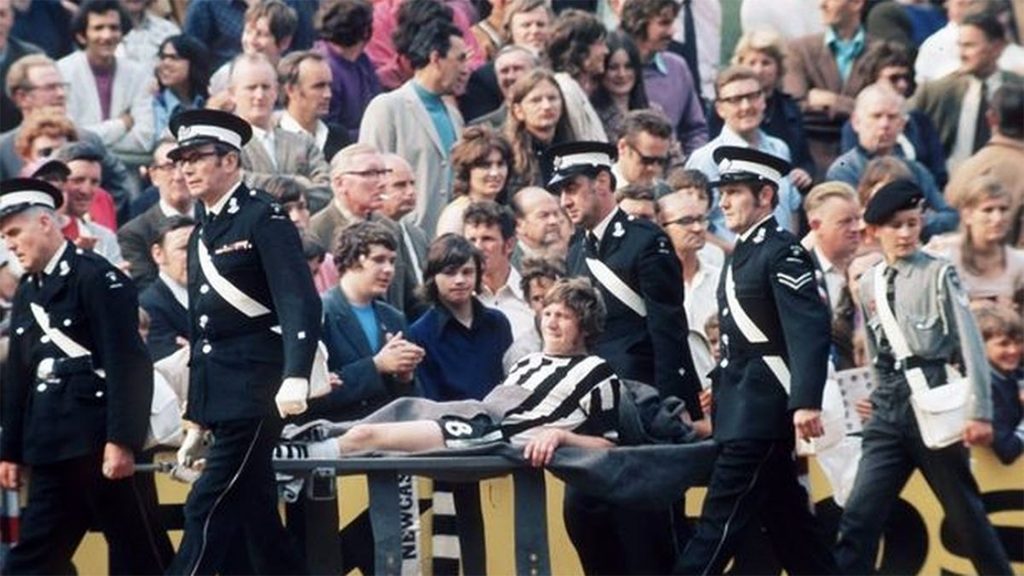 Tony Green did score one other goal for Newcastle united in a 4-2 away friendly defeat to Santos, who of course had Pele in their team, why would we care because we had Tony Green.

The memories of him are still very clear, indeed there is youtube footage somewhere of him leaving George best sat on the turf as his electric burst of pace left the Irish superstar in his wake, this was the game where Newcastle went to Old Trafford and won 2-0 just a week after the Hereford debacle in 1972.

Younger fans will have different heroes…who is better than Shearer, Beardsley, Gascoigne, Ginola et al. Well, my hero was Tony Green, 33 games for Newcastle United and I saw him 16 times in a black and white shirt and what an impression he made. Make no mistake, the two Wembley defeats of ’74 and ’76 could have been so much different as he would have been in his absolute prime.

Tony Green, a tragedy but a privilege to watch!

If only Eddie Howe had this fellow to call on…