Newcastle United playing on Saturday against Brentford was a great watch.

Six goals, some great football from both teams, a very open entertaining game, Newcastle showing great character to come back twice from a goal down, even almost winning it at the very end when Joelinton could and should have scored after ASM set him up.

Well, taken in isolation as a one-off, it was great entertainment and reminded you why you fell in love with football (Newcastle United) in the first place.

If Newcastle United were mid-table or better, that is where you pretty much could leave it.

However, that is very definitely not the case, as this updated Premier League table shows on Monday morning: 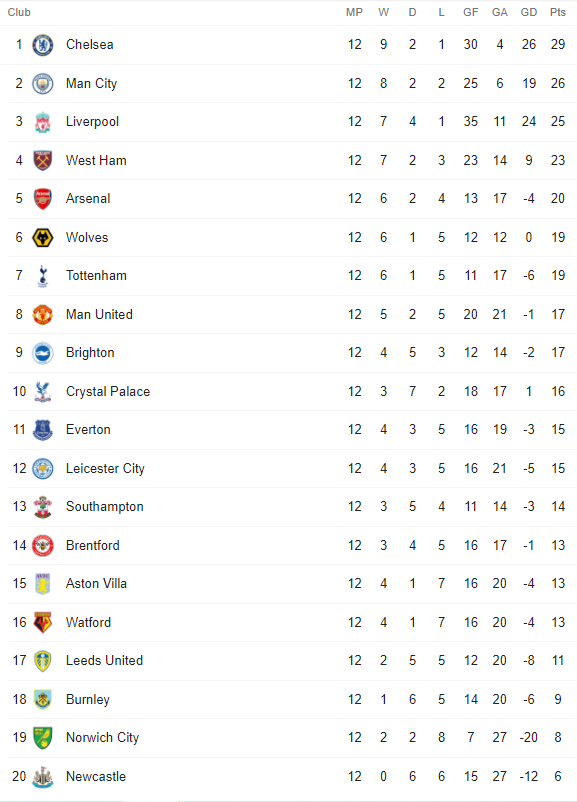 Yes, reality is that NUFC are currently anything but a safe in mid-table, so lets just enjoy the football, kind of club.

Watching the match was quite extraordinary for other reasons, such as just how poor some of Newcastle’s players are, compared to the best performers.

This is how Newcastle United lined up on Saturday against Brentford:

Bottom line is that the new Newcastle United owners and Head Coach, have inherited an absolute mess from Mike Ashley and Steve Bruce.

A massive part of that is what we see on the pitch, the result of a totally unbalanced squad in terms of quality and investment in various areas.

The vast majority of that problem for me, has been caused by a disastrous policy pursued by Ashley and Bruce for over a year before they left.

A policy that saw, rather than proper realistic investment in the Newcastle United squad and (often declining) players moved on and replaced by better quality players…instead, a large number of quite incredible contracts given to Championship players at Newcastle United

I’m sorry but the vast majority of these players would be at Championship clubs now, if not given ridiculous (almost all) recent new deals in the past year and a half or so.

Honestly, a six year contract for Jacob Murphy??? He played a bit better last season in a small number of games at wing back but to me the jury was still massively out on whether he was even capable of playing Premier League level, never mind that six year deal! Watching him this season just confirms for me that he should definitely have been moved on, seems a canny lad and is a lifelong NUFC fan, but (like the rest of us!) isn’t a PL player.

Five years for Karl Darlow? Somebody else who isn’t good enough, as we saw on Saturday. He did well in a small number of matches last season but swiftly went into serious decline and an absolute joke that Steve Bruce left Dubravka on the bench so long.

Dwight Gayle getting a new contract, despite Steve Bruce almost never playing him, that takes the striker up to just a few months short of his 35th birthday!

Matt Ritchie gives it everything but fact is, he would have gone to a Championship club if leaving Newcastle, instead of getting a bumper new contract. He is such a weak link when it comes to defending, same with Murphy on the other side.

Jeff Hendrick…yes I know he came in from the outside, but a four year bumper contract for such a poor player?

Jonjo Shelvey looked a bit more interested on Saturday and did move around a bit but even with him giving us a bit better going forward, he was still a serious liability when it came to defending. Other clubs simply tend to have far better central midfielders who can do both going forward and getting back.

Speaking of which…maybe a bit more contentious this one for some of you, but Isaac Hayden getting that six year new contract. If you could mould Shelvey and him into one player than we’d have a Premier League central midfielder, however, that is not the case. He is so poor on the ball and contributes absolutely nothing in terms of the attacking half, which means then you have to be exceptional on the defensive side. Which he is not. He tries and defends ok but overall he is a Championship player for me and it was a major plus for me that Eddie Howe left him out against Brentford. If Newcastle are to play football then Hayden has to be sidelined.

Again, speaking of which, needs to be sidelined, really poor on the ball…Jamaal Lascelles. Those days are now really distant where Rafa Benitez worked hard every week on making Lascelles a good Premier League defender and captain. Like Hayden, he tries his best but is so poor, so often. Slow across the ground and terrible on the ball, any organisational / leadership ability has totally disappeared. So often the defence is all over the place and the second Brentford summed that up, as Rico Henry was totally unmarked at the back post despite Newcastle having numbers back.

I’m not suggesting a magic wand can be waved in January and all of these players moved on and replaced by better, that should have been done over the course of the last however many transfer windows.

However, I think as fans we have to accept just what a mess the new owners and Eddie Howe have inherited and bringing better players in is just part of the equation, as they will have one hell of a job to move so many of the above players on. So many Championship level players on such lengthy Premier League contracts.

You could see the exasperation on the faces of players such as ASM, when all his efforts are then largely wasted by the seriously poor level of some of his teammates.

Dubravka will obviously be a big plus when he comes in against Arsenal surely on Saturday, then hopefully Eddie Howe will also find at least short-term places for the likes of Manquillo and Fernandez who are better than what we saw on Saturday. Whilst the new Head Coach will also surely get better from the likes of Almiron and Lewis, both players totally messed up by Steve Bruce.

It won’t be difficult to bring in some better quality replacements in January but even then you have to accept that it could still take time for them to adapt and integrate, plus you can’t bring in half a new first choice team all at once, or if you do you have a massive task getting such a new look team sorted mid-season.

Good luck to Eddie Howe, he’s going to need it. At least in this short-term of survival this season with the situation and players he has inherited.