Some interesting figures published on Wednesday morning, regarding ‘financing’ provided to Premier League clubs by the owners.

He (Swiss Ramble) has looked at the net finance provided by the owners of Premier League clubs from 2010 to 2020. 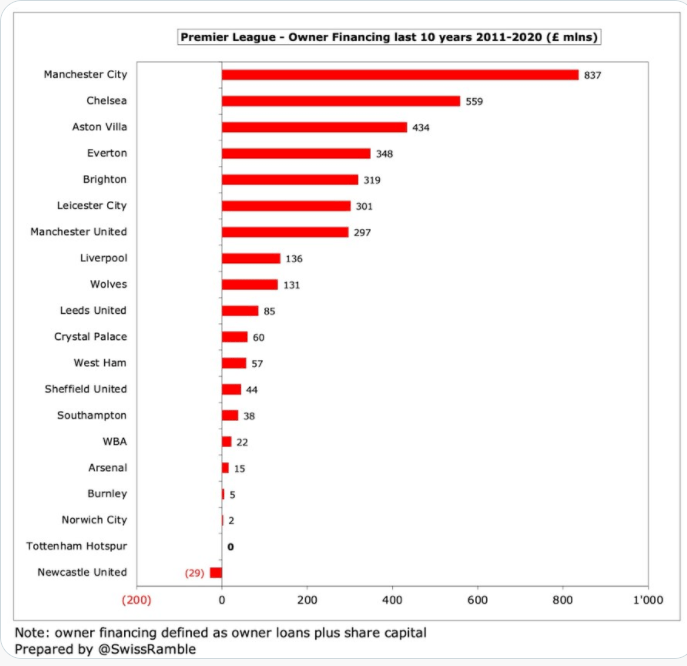 As the Swiss Ramble says in his notes on the table, owner financing is in effect owner loans plus share capital, with the Tottenham owners putting absolutely nothing in themselves.

However, not to be outdone, Mike Ashley is as you can see, the only owner in the table above who with Newcastle United outdid Tottenham! Yes, in that ten year period Ashley actually taking a net £29m OUT of NUFC! This due to Ashley relegating Newcastle United and then having to put some money in to help ensure the return to Premier League worldwide TV promotion of his retail empire via NUFC.

The reality is though that on top of it being shocking for starters that Mike Ashley invested nothing whatsoever in improving / growing his asset for all those years such as investing in St James Park expansion, new training complex and / or new Academy….he actually took money out. Yes it was his loans that he put into the club (his business) after both relegations in 2009 and 2016 BUT no decent / ambitious owner of a Premier League club would then take that money back out of the cashflow after promotion, risking disaster yet again. They would leave that cash in as an investment in their own business until then finally selling it.

What Mike Ashley did was to severely further hamper Rafa’s attempts at progressing Newcastle United. Ashley shamefully using that line of Benitez going to get ‘every penny’ available to spend in the transfer market whilst knowing full well that ‘every penny’ to spend would only come after Ashley had deducted the tens of millions of loan he was taking back out!

Of course, thankfully we now have new Newcastle United owners that have meant Mike Ashley is history BUT his legacy is a football club that is an absolute shell, needing investment everywhere. From the product on the pitch right through the whole club and especially the infrastructure – new first team training complex and academy, as well as St James Park investment (21 years since the redevelopment) amongst many others.