Eddie Howe has been Newcastle United Head Coach for less than a week but fair to say he has already made a very favourable impression.

Newcastle fans reacting well to footage of Eddie Howe in before 7am at the training ground on Tuesday as he began work on his first day.

Then his first busy week of training culminating with Newcastle United training on a Saturday, in the middle of an international fortnight…surely not?

Yes, yesterday Eddie Howe has the players putting the hours in to improve both fitness and productivity, though a change of scenery as the training session was at St James Park, training on the pitch on Saturday.

So what is Eddie Howe trying to achieve at Newcastle United and most importantly, how is he going to try and do it?

This is how the official Premier League site have explained the background to Eddie Howe, Adrian Clarke with the belief in how he will go about it:

‘Howe will aim to excite Newcastle United fans with a fresh brand of positive, entertaining football.

Comfortable in possession or happy to sit back and counter, Howe’s sides have always carried a consistent goal threat.

At the end of 2016/17 and 2018/19, the Cherries finished as the Premier League’s seventh-highest scorers, netting 55 and 56 goals respectively in those seasons.

The new Magpies head coach is not cautious or pragmatic, he sets out to win matches in an assertive, front-footed manner.’

‘During his first two campaigns as a top-flight manager, AFC Bournemouth averaged a share of more than 51 per cent of possession.

It did drop year on year after that, but it has never been his style to focus solely on stifling the opposition.

This committed mindset has helped Howe to inspire a series of shock victories over English football’s leading lights.

In fact, in each of his five seasons with the south-coast side, they took at least one big-name scalp who finished in the European places.

Having beaten Chelsea in three successive seasons, and Manchester United twice, Howe has built a reputation as somebody capable of delivering successful game plans against the very best.’

Tactics and team set up:

‘Howe rarely deviates away from starting with a traditional back four, using it in 86.3 per cent of his matches as a top-flight manager.

Over the coming weeks it will be fascinating to see how he integrates the mercurial Allan Saint-Maximin into his tactical framework.

The Frenchman has been at his best in a free central role this term, so he is likely to operate as a partner to Callum Wilson, or just in behind him down the middle.

The 5-3-2 and 5-4-1 shapes used by caretaker boss Graeme Jones are likely to be quickly dispensed with.’ 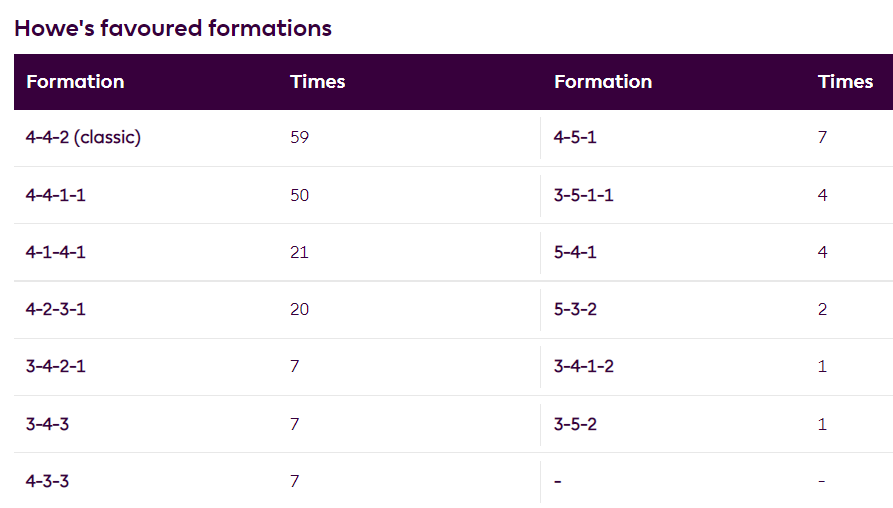 ‘History has placed a question mark over whether Howe has the capability to improve the second-worst defence in the league.

His attack-minded AFC Bournemouth side conceded between 61 and 70 goals in each of his five Premier League campaigns.

During his final season they faced an average of 14.7 shots each match, conceding an average 1.7 goals per 90 minutes.

This in turn put a lot of pressure on the forward players to deliver big performances.

Over the coming months Howe will want to engage the Newcastle fans with a positive style of play, but this must not come at the expense of much-needed solidity at the back.

With attention to detail and a high work ethic among his strongest traits, Howe will be working night and day to strike the right balance at his new club.’

Newcastle United fans are pretty much unanimous that this group of players has been made to look far worse by Steve Bruce than they are capable of in reality.

A prime example is that pretty much the same set of defenders under Rafa Benitez only had six teams conceding less goals in each of the two Rafa NUFC Premier League seasons, the defending getting progressively worse under Steve Bruce, only Norwich conceding more in the 11 rounds of games so far this season.

Of course, Bruce also backed with some £125m+ of net investment in the Newcastle squad in his two years, unlike Rafa Benitez who had zero net investment allowed across his three years at St James Park.

Every reason to expect that with a proper manager now replacing Steve Bruce AND putting in proper hours on the training pitch (and at St James Park), we can see sizeable improvement from this same group of players.

It may not happen overnight and patience could be called for when it comes to Eddie Howe turning around this group of players that have been subjected to over two years of Steve Bruce – BUT at least now we have hope and reasonable expectation that the recovery can now begin after only seven wins in the last forty one NUFC matches.