The plan then is that the 63 year old German will then move upstairs at the end of the season into a consultant Director of Football type role.

After Steve Bruce was belatedly sacked by Newcastle United, Ralf Rangnick was linked with the vacancy, one of the suggestions being that potentially he could have been appointed on a similar basis to what appears set to be the case at Old Trafford.

As we know now, that is all history. Whether there was any real substance in terms of Newcastle United interest is an unknown, with Eddie Howe the choice to try and sort out the mess left behind by Ashley and Bruce.

So what would have been the likely outcome if Ralf Rangnick had been the man for NUFC?

Well, a new report suggests that he would have had an serious uphill struggle to adapt the current Newcastle United squad to his methods.

A very interesting article by The Athletic has looked at how likely Ralf Rangnick is to suit this Manchester United squad.

These are the seven main metrics used to measure suitability to the Ralf Rangnick style:

‘Sometimes the simplest way to measure a defensive style is enough to give you the whole picture: Rangnick’s teams don’t let opponents connect passes. He is sometimes called the godfather of gegenpressing, the coach who inspired Germany’s modern craze for swarming the ball to win it back as quickly as possible after losing possession.’

‘The advantage of staying compact in midfield and picking their moments to press is that when Rangnick’s team did close down, they usually managed to get the ball back.’

‘Rangnick’s teams are not just compact off the ball. Because his style of play is built around transition moments, defence and attack are basically inseparable, making it important to stay close when in possession so that there will be as many bodies as possible close by to counterpress after a lost ball.’

‘The passing is not just short but straight ahead. Along with his bit about how a team is most likely to recover the ball eight seconds after losing it, Rangnick likes to say that the best time to score is within 10 seconds of winning the ball back.’

‘Rangnick’s relentless style of play — staying compact on and off the ball, passing short and straight ahead, and swarming in numbers to regain possession after a turnover — keeps the ball constantly pinned in the attacking half.’

So how do Manchester United (and Newcastle United…) measure up this season to the Ralf Rangnick style?

‘By averaging teams’ percentile ranks across these seven stylistic metrics (we’ll leave out age) that capture the basics of Rangnick-ball, we can get a simple similarity score to estimate how Rangnick-like a given team is.’

This is the table of Premier League similarity / suitability (or not…) that they came up with: 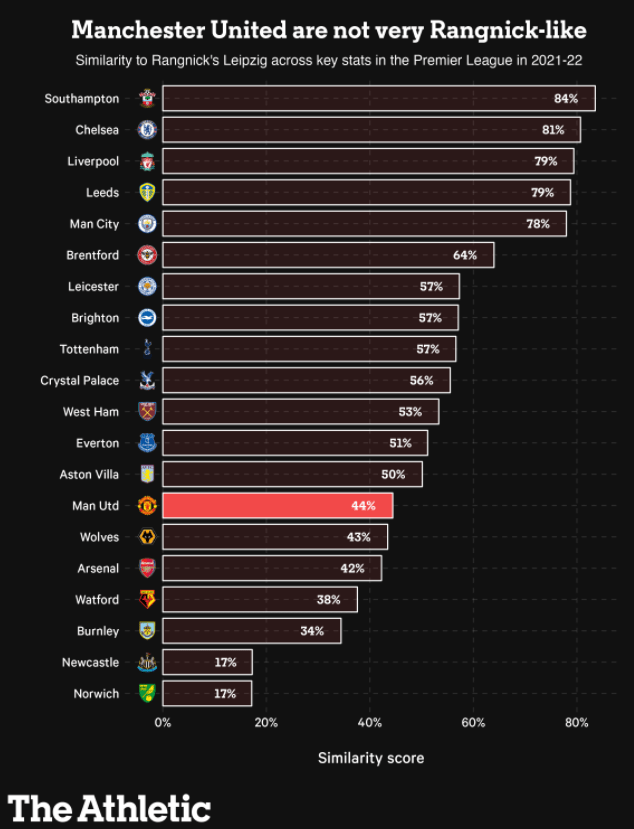 The headline findings for The Athletic were:

‘Not surprisingly, the Premier League side that scores highest is Southampton, coached by Rangnick disciple Ralph Hassenhuttl.’

No surprise either, having watched them this season, that the likes of Chelsea, Liverpool, Leeds and Man City all score highly due to their playing styles.

‘Ole Gunnar Solskjaer’s Manchester United were a far cry from a Rangnick team. Only six English teams score lower than United’s 44 per cent similarity to 2018-19 Leipzig.’

As for Newcastle United suitability / similarity this season in terms of being a perfect match for the Ralf Rangnick style…joint bottom along with Norwich City.

Of course, this all relates to how we ended up thanks to Steve Bruce, such a negative playing style.

Whereas, Eddie Howe has his own way of doing things, a style that as the Brentford match shows, which like Ralf Rangnick, also relies on playing higher up the pitch and pressing other teams more than has been the case this season. Though the Arsenal game yesterday did show that at least in the short-term, Eddie Howe is prepared to ix and match his tactics, going for a more defensive and counter-attacking approach away to the Gunners.

Against both Norwich and Burnley at St James Park in the next week, we will surely see Eddie Howe going very much back on the attack, to get the goals Newcastle need to pick up the first two wins of the season, if the luck is with us.

3 Positives and 3 Negatives from Leeds 0 Newcastle 1