Eddie Howe has been given a clear understanding of key Newcastle United stats that have to be transformed.

A new report showing exactly why the results and place in the table for NUFC have been what they are.

Three months into the season and not a single win, second from bottom of the Premier League and only five points from a possible thirty three.

This new report after the first eleven rounds of Premier League games has for me, absolutely highlighted where the most serious NUFC problem is.

It is so basic and impossible to ignore.

The report is from  ‘The Other 14’ (who specialise on stats/tables etc on the 14 clubs who aren’t the ‘Big Six’) which shows Premier League clubs when it comes to team shots compared to shots allowed for the opposition, in the opening eleven rounds of PL matches: 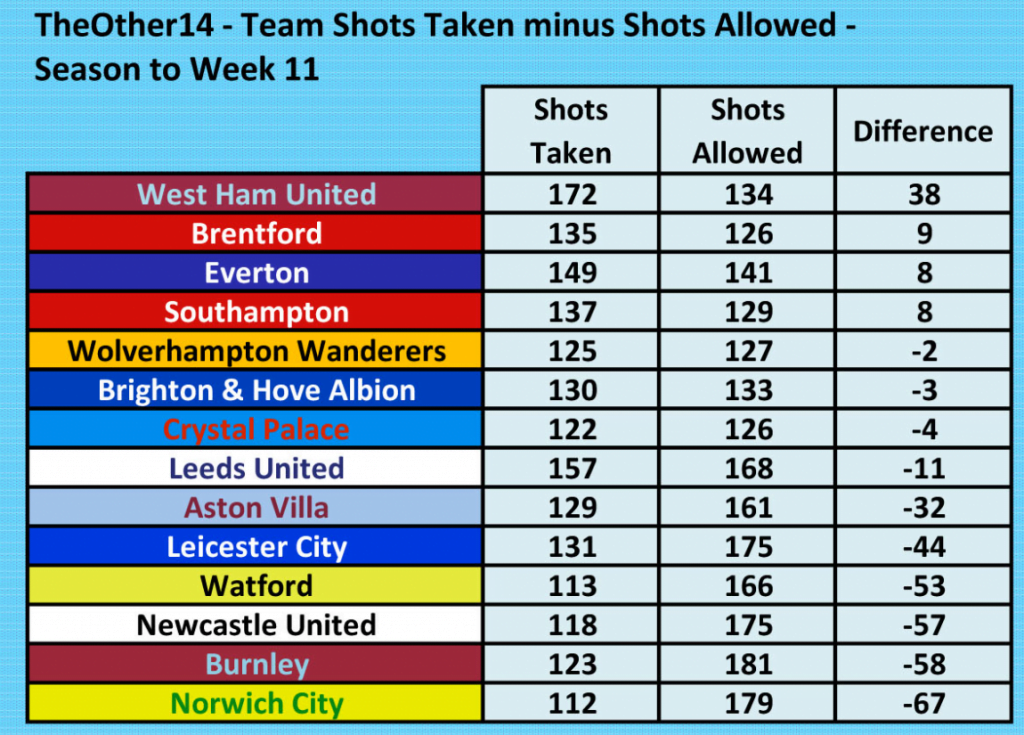 In simple terms, how many shots your team has compared to the opposition.

Bottom line, over the course of the season the number of shots will be reflected in terms of the number of goals scored / conceded at either end of the pitch, which will almost certainly be very telling when it comes to how many points you then accumulate.

For Newcastle United, only two clubs have seen the opposition have even more shots than NUFC have faced, Burnley facing 181 and Norwich facing 179, whilst Newcastle next with 175 shots faced.

When it comes to your team having shots, Newcastle with only 118 so far and once again, only two other PL clubs having worse figures, Norwich having had 112 shots and Watford 113.

Looking at just Newcastle United stats, with 118 shots over 11 games, NUFC only averaging 10.7 per match. Whilst with 175 allowed, that averages at 15.9 shots faced per game.

The difference between the two Newcastle United stats is 57 shots, so that averages out at Newcastle facing on average 5+ shots more per PL match than the shots they average themselves.

Bottom line, on average the opposition are having 50% more shots when they face Newcastle United than NUFC are having themselves.

Eddie Howe has to change that direction of travel because anybody who has ever played football, or indeed watched it, knows that you aren’t going to win many games on the basis of the stats above.

No coincidence that the four clubs that are bottom of the comparative stats above, also happen to be currently the bottom four teams in the Premier League.