After five weeks without a game for his club, Miguel Almiron was finally back in the Newcastle team for the 1-1 draw with Brighton.

A point gratefully received for Newcastle United but a bit of an anonymous performance from Almiron as he was subbed off on 74 minutes in favour of Joelinton.

Joining up with Paraguay for vital World Cup qualifiers, Miguel Almiron hoping for a return to form for both himself and his national side.

The early hours of last Friday morning (UK time), Miguel Almiron and his Paraguay teammates extended their recent World Cup qualifying run to four games without a win, or a goal, as they lost 1-0 at home to Chile.

Moving on to their next game, the fifth last of eighteen in the extensive South American qualifying process, it was surely their very final realistic chance of getting back into the mix in terms of potentially making the 2022 World Cup finals in Qatar.

Away to Colombia and only a win would be good enough, it was a feeble response to the challenge from Paraguay, not a single effort on target in the entire game and only 35% possession.

Miguel Almiron putting in his usual excellent workrate but along with his teammates, lacking the inspiration needed to create and score goals, as Paraguay made it five World Cup qualifiers without a goal.

Colombia far happier with the goalless draw and point as it leaves them fourth top of the group, whilst Paraguay are now second bottom of the ten and realistically have almost zero chance of qualifying: 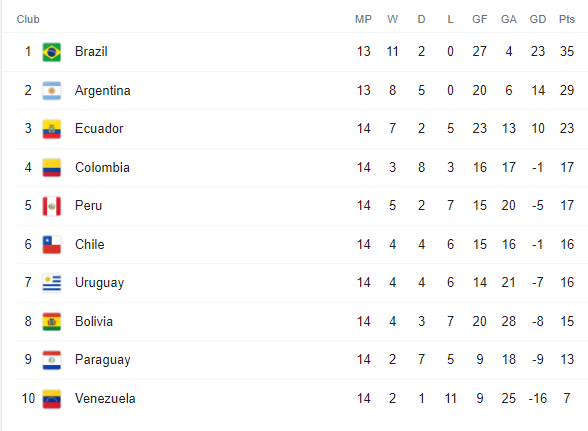 The top four qualify automatically for Qatar whilst the fifth goes into a play-off. As you can see, after this latest disastrous result, Paraguay are now second bottom and realistically no chance of qualifying now.

Whilst European qualifying groups have been completed in recent days and only play-offs to come in March 2022 for some, Paraguay still have four group games to go. However, when they play in January 2022 one of the two matches then is away to Brazil where defeat is all but a certainty and with so many teams above them, Paraguay would need to win the other three of their last four qualifiers to have any hope of qualifying and after two points from their last five matches, that isn’t going to happen.

After this latest massive disappointment in the early hours of Wednesday morning (UK time) in Barranquilla, Miguel Almiron will later today begin his lengthy journey back to Tyneside from Colombia. This means he will likely have at the most only one training session under new Newcastle boss Eddie Howe before the massive relegation clash with Brentford in three days time, surely meaning he has next to no chance of selection in that starting eleven.

Almiron is just one of the many players who have got progressively worse under Steve Bruce and the Paraguay international is one who could be a massive positive, if Eddie Howe can get him back to the form he showed when first arriving under Rafa Benitez when Newcastle played far more positive football. Newcastle ended that 2018/19 season, Miguel Almiron arriving on 31 January 2019, with the fifth best form in the Premier League over the final 16 matches AND the fifth highest total of goals in those last 16 games under Rafa.

With Eddie Howe having a reputation for playing attacking football, it could be just the thing Miguel Almiron needs after the nightmares of failing World Cup qualification and playing under Steve Bruce for over two years.

After spending much of these past two and a half years as basically just an extra defender under Bruce, totally stifling his attacking game, a real lifeline for Miguel Almiron as he looks forward to club football under the new NUFC Head Coach.